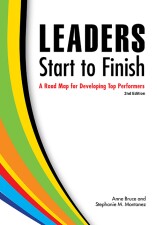 A Road Map for Developing Top Performers
By Anne Bruce Stephanie Montanez
Bookmark
Share
Sample Chapter
Pricing
Save when you buy in bulk.

Within the framework of providing detailed, workable, real-world suggestions and examples for building or improving your leadership program, some of the specific topics covered in Leaders Start to Finish include:

See All
About the Authors
See All
Praise for This Book
Anmarie Miller
Senior Leadership Facilitator Former Manager of Facilitation, Southwest Airlines’ University for People
What a great resource for any organization wanting to nurture and grow top talent at all levels! Use this book to build frontline leaders, inspire coaches, create productive managers, or just give a much-needed boost to senior execs looking to renew the organization’s leadership spirit from the head and heart!
Barbara Fagan
President Source Point Training
WOW! Anne and Stephanie have created the best resource tool for our clients.
Betty Garrett
President Garrett Speakers International
Anne and Stephanie bring out the best in leadership! They will transform and boost your organization with industry benchmarks and best-in-class icons, like Zappos, Pixar, Ralph Lauren, Whole Foods, London Business School, Ben & Jerry’s, Apple, and dozens more!
Perry Holley
International Speaker and AuthorIBM Leadership Development
Developing leaders has been my business at IBM for the past decade and this practical field guide is a resource I would never be without. Its straight-forward approach and real-world examples provide exactly what I need in my own life and in the lives of the people I work to influence and lead.
Sam Glenn
Keynote Speaker and Bestselling Author of A Kick in the Attitude
Engage your leaders to do more with less! Anne is the master of motivational leadership and this book has all of her golden nuggets to help make your leaders shine.
Scott Carbonara
Speaker, Consultant, and Author of A Manager’s Guide to Employee Engagement and Go Positive: Lead to Engage
This book is the best source for developing top performers that I have seen. Anne and Stephanie highlight the ‘best-of-the-best’ leadership practices—inspiring leaders to fully engage. Anne writes with her signature motivational style—delivering the passion that makes her so successful as a speaker and consultant.
Be the first to comment
Sign In to Post a Comment
Sign In
Sorry! Something went wrong on our end. Please try again later.