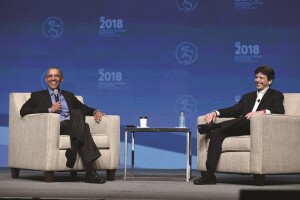 Change, resiliency, learning from failure, optimism. Those are just some of the topics President Barack Obama discussed during the ATD 2018 Opening General Session on Monday morning. During the sit-down with ATD President and CEO Tony Bingham, Obama shared stories of his presidency and congressional and presidential campaigns, and emphasized that simple values such as kindness and respect will get you far.

Throughout the Q&A with Bingham, Obama underscored how values have a strong role in everything: people’s actions, how they think, and how they live their lives. “The older I get, the more I have come to appreciate the old-fashioned, home-spun values” that his mother and grandparents taught him, Obama said. He pointed to attributes such as being honest, kind, useful, and responsible; working hard; and carrying your weight.

These traits apply in both our personal and professional lives. For example, Obama spoke of a 20-something Asian-American campaign worker, Ryan, who was assigned to a conservative, rural community in Iowa. Despite facing racism as he traveled throughout the region, Ryan was helpful, respectful, and open-minded with the townspeople—so much so that by the time Obama appeared for a campaign rally, Ryan was almost as popular—if not more popular—than the presidential candidate for whom he was working. “The reason he had been successful was not because of my 10-point plan for dealing with healthcare or economics,” Obama said. “The reason was because he was in possession of a set of values that he carried into that situation, transmitted by his parents.”

Obama believes that many of the workers on his campaigns succeeded because of the environment that he fostered. “We set up a structure that was predisposed to the potential and power of the people who were working” as part of his team. The premise was “We’re going to give you a lot of responsibility, we’re going to hold you accountable,” he explained. “People respond when you expect a lot of them.”

During his presidency, Obama noted, he also set the example for other leaders in his administration to treat their workers with respect. In meetings in the Situation Room, seated around the table with the president were generals and secretaries. And on the “outer ring” were the staff of those high-level leaders—“the people who actually do the work,” Obama explained. So the president would on occasion ask those staffers what they thought about the topic being discussed. Obama said he did so not only to show the staffers that they mattered, but “I was also sending a message to the principals that they should be listening to their staff and asking for feedback.”

Obama also tied his message back to the work that talent development professionals do. He said that he suspected that the most rewarding times for talent development practitioners are not simply training for a particular task. “Where you’re most effective training someone else is to get them to tap into their best self,” he remarked.

In the workplace, it’s everyone’s job to create a positive culture. “It means that in your organizations, you’re taking responsibility to make sure that the people you work with are treating each other with respect,” Obama said, stressing that organizations should be inclusive in encouraging women’s voices to be heard, respectful toward those in the LGBT community, and ones where “You are insisting on continually improving performance.”

“We all have a responsibility to make the world a better place,” Obama added, ending with a principle that he tells his daughters: “If you’re kind and you’re useful, you’re probably going to live a good life.”

Gwen Navarrete Klapperich
November 12, 2018 05:02 AM
Thank you for the summary. I was volunteering that day and was unable to attend his presentation.
Sorry! Something went wrong on our end. Please try again later.
TH
Terry Harris
August 08, 2018 07:49 AM
Is President Obama's video available to view?