Discover the Fabric of Your Work, Marcus Buckingham Says 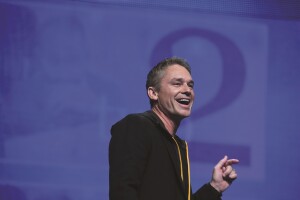 Marcus Buckingham wants to know: How do people work? “That’s what I’m super interested in,” he said during his ATD 2018 keynote address on Tuesday morning. Buckingham, founder of the strengths revolution, head of ADP Research Institute—People + Performance, and New York Times bestselling author, spoke to conference attendees about his freethinking approach to research and why individuals should cultivate their strengths.

“Excellence has its own pattern. You can’t infer what excellence looks like from studying failure. If you want to learn a lot about failure, study failure,” he said.

Thus, Buckingham stated we must become students of excellence. What he has found by taking a freethinking, student-of-excellence approach to the world of work is that most things that we believe to be true are not. Through research, Buckingham and his team have concluded that there are nine lies about work, one of which he focused his speech on: that well-rounded people are better.

To illustrate his point, Buckingham spoke about Lionel Messi, arguably one of the best soccer players in the history of the sport. By showing a short video clip of one of Messi’s amazing goals, Buckingham was able to demonstrate that excellence isn’t well-rounded.

In the clip from the Barcelona versus Bilbao game in the 2015 Copa del Rey, Messi makes a series of moves from midfield, using mainly his left foot to maneuver the ball down the field and into the goal. While other elite soccer players—who some may call well-rounded competitors—can dribble and kick the ball with both feet and score goals with their chest and head, Messi is mainly skilled in using his left foot. The point Buckingham made is that Messi doesn’t need to be well rounded to be an excellent soccer player. He just needs an excellent left foot.

So, what’s your left foot, so to speak? In other words, what’s that one skill in which you excel and which you can continuously develop further? “You learn and grow and develop the most in the areas where you’ve already shown some comparative advantage,” he shared.

Talent development professionals should help people find their strengths and cultivate those strengths intelligently, Buckingham said. “When you develop someone’s talent, you are showing them the configuration of a talent pattern that is already there inside them. And you’re helping them to re-create it, refine it. That’s what talent development is.”

Buckingham also used the video clip—which showed Messi’s pure joy after scoring the goal—to illustrate that “if you want to release talent, you’ve got to get in and you’ve got to engage with the language of love.” Spend a week in love with your job, Buckingham suggested. To do so, over the course of a week, write down all the work activities that you loved and those that you loathed. The activities that you love are what Buckingham calls red threads. “Think of those threads as your strengths,” he said. “What we are trying to do here as talent professionals is we are trying to help people find their red threads”—to build better teams and better organizations.

He added: “You don’t need to do what you love, but if you take these red threads yourself and weave them into … the fabric of your work—even if you’re at 20 percent red threads—you’re a different human.”