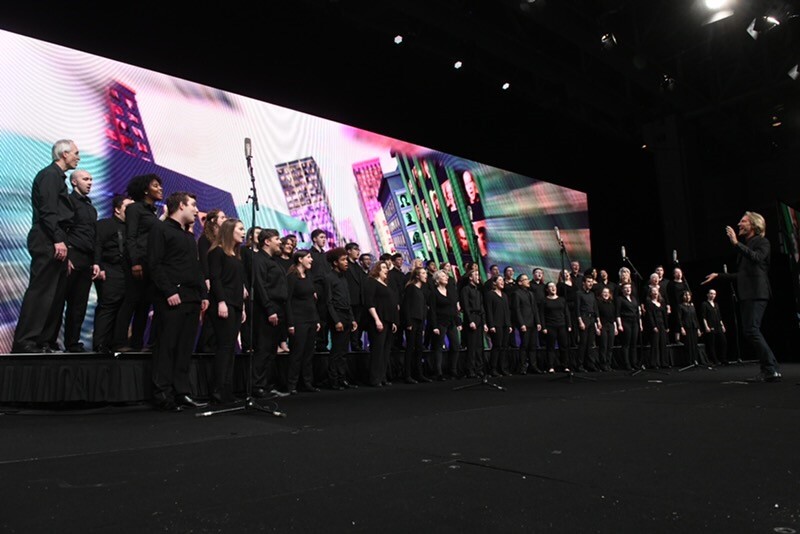 Eric Whitacre: Be Part of Something Bigger Than Yourself

Grammy-winning composer and conductor Eric Whitacre had an aha moment when he knew his vocation was meant to be music. Even though he hadn’t been involved in music previously, in college he decided to join a choir. And he loved it. As the choir began to sing “Kyrie,” he felt a level of “complexity, depth, and humanity” he hadn’t yet experienced. For the first time, he felt “part of something larger than myself.” Whitacre continued, “that feeling transformed me.”

Whitacre decided to write his first piece of music as a gift to the man who changed his life, the director of choral studies at the University of Las Vegas, David Weiller, where Whitacre went to college. When Whitacre gave his composition—music that contained his ideas, hopes, dreams, and aspirations—to the choir and heard his music, he understood through the “voices, and hearts, and souls of other people sounding in the air …” that this was what he was meant to do, that was his vocation.

Difference we can make
Perhaps like many in the talent development community, though, Whitacre didn’t know the impact of his music on others. He would finish writing his music, it would be published into sheet music and sent to choirs or orchestras around the world, but he never knew where. That is, until he received a YouTube video featuring a young woman, Britlin Losee from Long Island, who created a fan video for Whitacre, singing a bit of his song “Sleep.”

It was then that he saw the effects of what he does. He saw, as he explained, the purity, the intention in her eyes, her face, that were so beautiful. He got to thinking more about his passion, the nexus of art and technology. And he started wondering, could he create a virtual choir by uploading people singing music on their own if they were using the same tempo, at the same speed, in the same key?

As Seth Godin expressed on Tuesday in his keynote session, leadership is about moving ahead even while not knowing how to get there. Whitacre didn’t know if his idea of a virtual choir was going to work. But he tried it anyway. And it did work.

Whitacre hadn’t contemplated doing the choir again. But virtual choir 2.0 for “Sleep” followed and then virtual choir 3.0, “Water Night,” which featured nearly 4,000 singers from 73 countries. Among the singers was a man who had sung in choirs in his youth but who became legally blind. He hadn’t been able to continue with his passion because he couldn’t see the conductor. That changed with a virtual choir, because he could get close enough to the computer to see. He could now be a part of something larger than himself.

Another person participated while holding her dying mother’s hand. And yet a third person, a man from Cuba, contributed only after Whitacre and an IT professional were able to walk him through splicing musical files that could be transmitted, bypassing the country’s size limitation on electronic communication.

Everyone is welcome to be part of something bigger
So many people have been told they can’t sing, Whitacre commented, but there are no auditions for the virtual choir (except for solos). More voices make the sound better. As the movement grew, Whitacre and his team faced organizational, scaling challenges. Everyone wants to be “part of something larger than themselves.”

The head of TED, Chris Anderson, approached Whitacre and posed the question, “Is it possible to have a live virtual choir?” Whitacre moved ahead on this. He and his IT team researched and determined that the next piece for the virtual choir would need to be one without tempo so they could manage the latency lag that occurs with real-time communication.

As Whitacre pursued his next project, he felt the creative, artistic weight of Johann Sebastian Bach and Ludwig van Beethoven on his shoulders. It was when his son, who had been busy with his own artistic creation, explained his drawing—a picture containing a pyramid made of cheese and a snake wearing pants—with “no sense of irony, no sense of judgment” that Whitacre had another aha moment. The great thing about children, he said, is “they’re just experimenting; they’re just playing.” Whitacre, emulating his son, sat back down to write—this time with no judgment.

In closing, Whitacre vocalized his passion before showing how it becomes something tangible. He said, technology is who we want to be; “art is who we are … flawed, wondrous imaginative beings” reaching out for our tribes, aspiring to be part of something bigger than ourselves.

To close the keynote, an in-person choir, along with 8,420 singers from around the world, sang “Fly to Paradise,” which included the lyrics: “She remembers having wings. But she’s forgotten what it feels like to fly.”

Do you remember what it feels like to fly? Perhaps it’s time to relearn.