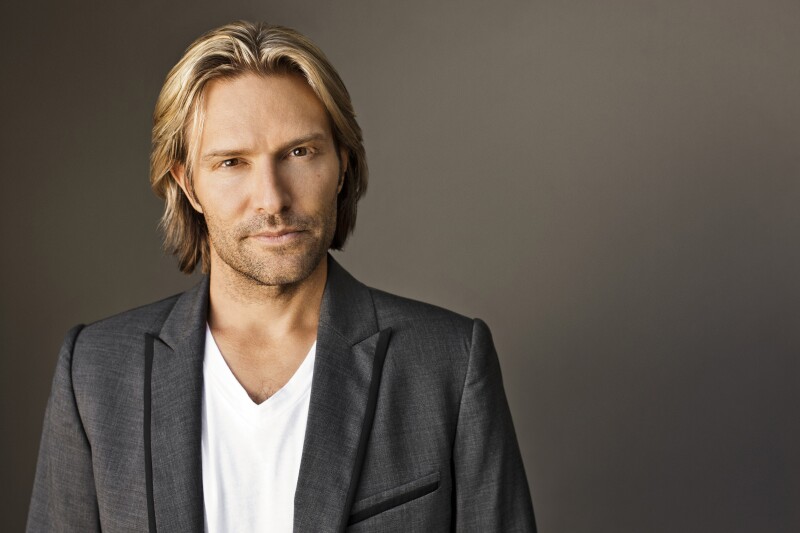 Eric Whitacre is a Grammy-winning composer, conductor, and creator of the groundbreaking virtual choir, Deep Field. He is known for working at the nexus of art and technology, where he finds profound, universal wisdom about leadership, collaboration, community building, and nurturing the creative process. Before taking the stage, Whitacre spoke with the Conference Daily.

What inspires you on a day-to-day basis in your work?
Well, I suppose all kinds of things inspire me. Most specifically, the thing that inspires me is the deadline. I'm only half being cheeky about this. I can be inspired by the natural world, by food, by movies, by literature, by other music, by my son, by my wife. But the truth is, there is nothing that inspires like having a deadline. And I really mean that in the true sense of inspired—that I end up making decisions and ultimately clever decisions because I’ve just got to figure out a way to finish the thing on time.

What was the impetus behind and made you believe a virtual choir would not only work logistically but be successful?
The initial impetus was simply watching this video with this young woman named Britain Losi. She was 17 years old at the time. And she uploaded it to YouTube. She didn’t know me; it was just a fan video. She was just singing a piece that I had written. She put on the CD, and she was singing her part to it, the top line to it—and just somehow sent it out in the world, hoping it would find me. And when I saw that, I had the idea that if other people did the same thing she was doing, as long as they were singing at the same speed and in the same key, it would have to create this virtual choir.

I didn’t think it would be successful, to be honest. I didn’t even know if it would work. It was just an idea I had in a sort of spark. And I tried it, and it worked better than I possibly could have imagined.

It sounded musical, and the poetry—it immediately became clear to me after I saw the finished product that the virtual choir seemed to mean much more than just a group of people coming together around the world singing.

Did you ever think that the music would come together as well as it has and be received so favorably?
No, and it’s still a very odd experience for me personally, because I just continue to write the music that I love, the music in my heart and in my body and my mind. And I'm just very grateful that other people seem to like it.

Can you speak to the bond that participating in your virtual choir forms for you and outside participants?
It’s an extraordinary thing, and something I never could have imagined when we started this.

Oftentimes people will write and say that they feel part of the family—they feel part of something larger than themselves. And when they describe the experience of singing the virtual choir, it sounds like they were actually in the room with these other people. They describe it in very present, very real terms. And I think somehow that creates a bond amongst the singers that is very, very real. It transcends the virtual world. And they feel like they know each other.

In some cases, they’ve gone on to become lifelong friends and meet in person often. Sometimes they’re virtual pen pals; they use Skype and call each other and email all the time, but they’ve never actually met in person, but there’s no question that the bond is deep and long lasting.

There’s certainly something to be said for taking the road less traveled and paving your own way. What advice could you give to people that see through different lens to help them leverage their ideas?
You know, I never thought that what I was doing was that groundbreaking or unusual. I think it’s just pulling together a bunch of disparate ideas and combining them into a soup that is different, only because it’s using ingredients that maybe didn't get used together before. I’ve never tried to be groundbreaking; it’s just me doing what I do. I think the people who see things through a different lens have to trust that what they do, what they feel, and the way they see the world is actually interesting and has value. And ultimately, it’s just finding the right vehicle.

I guess if there were pragmatic advice, it would just be to keep going, because for every hundred ideas I have that seem interesting or worth pursuing, only one will actually be a good one or see fruition. So maybe it’s a combination of being a dreamer and being persistent at the same time—that seems to make things that are outside the box happen more often than not.

How far do you think or hope creativity with technology like your virtual choir can go in the next few years?
I'm not sure really. Truth be told, I find myself moving away from technology and back to very simple human pleasures and connections. I’m on a pretty strict news diet right now. I only look at the news once a day and then just for a few minutes to make sure I have the basics down. In terms social media, I'm almost completely off social media at this point. Now, again, just a few minutes a day. Sometimes I'll go days and days without checking in on social media

In terms of using technology for concert works, I also only would ever use them if I felt that it was absolutely necessary, not as a gimmick and certainly not to push forward the agenda of technology with acoustic instruments—but only if it if the piece absolutely required it. And lately the pieces that I’ve been writing don’t require it. In fact, I’ve kind of gone back to a very old-school approach writing for orchestras and singers.

I think the sky’s the limit for where technology is going in the next five years. I couldn’t begin to guess what will happen, and further out, say 25 or 30 years, I can’t imagine, but I hope I’m around to see it.

What are the top three takeaways the attendees can expect from your keynote?
First and foremost, I hope there’s a reminder that really what motivates people—and I believe this to be a basic, fundamental human truth—is a desire to be part of something larger than themselves. People will overcome all kinds of adversities to have that feeling and will work very, very hard and go far beyond what they thought was possible for themselves to have that feeling and to belong to something larger than themselves.

Second would be to have a playfulness about a creative idea and that, at the end of the day, is just about combining these different ideas and having fun with them. Or maybe fun isn’t the right word—it’s retaining a sense of wonder and awe. I think I say fun because I think of children and the way they have fun while they’re doing it. I think children are just fascinated easily, and I think the ability to take that into the adult world is a treasure. It keeps things fresh, and new, and exciting, and fun, and certainly makes for a more creative individual.

Third, because I will be talking about the creative process itself, is to never waste a note. And in this case, I mean a musical note. What I mean is that every single note, every molecule of whatever it is you’re making is a chance for perfection and a chance to make the whole stronger and better. The microcosm is as important as the macrocosm, and every detail should be thought about and refined. The whole, the big picture, can only get better with that kind of attitude.