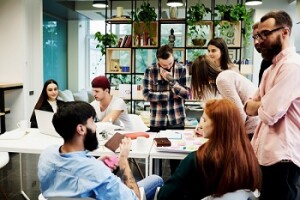 Disruption is probably the most overused word in the business world today. It may refer to Uber or Lyft disrupting the car service industry while not owning any cars, Airbnb doing the same for the lodging industry without owning any real estate, Netflix for on-demand movies without owning any movies, or any number of new companies interfering with the standard way of doing business. The disruptive era is upon us with no signs of slowing down, particularly given the continuous advent of technology and the sharing economy. In fact, Tim Sanders from Net Minds in a 2016 I.S.A. presentation indicated that the rate of disruption—that is, how long it takes for disruption to change an industry—has decreased from about 10 years in the 1960s to less than three years today.

In the talent development industry, I see three major drivers that have the potential to be disrupted: the content presented, the delivery by which it is presented, and the instruction used to deliver it. When you think of the industry in this way, it really simplifies what you must do to differentiate your business. If you aren’t strong in at least one of these areas, you are going to find it difficult to compete over the long haul.

Interestingly, however, I think the supplier industry’s real disruption is less likely to occur in any one of these drivers as it is to evolve from a yet unknown intersection of the three. While the industry thinks it is in the middle of a learning and technology disruption, I would contend it is more in the middle of a time of interruption. Nothing has yet been truly disrupted. Indeed, on the other side of disruption is what I see as corruption, wherein technology suppliers, largely from outside the training and development field, and who don’t understand the content or instruction industry drivers, rely so much on the delivery driver that they undermine the very fabric of the industry. They end up providing inadequate solutions that fail to achieve needed results in skill development and performance improvement.

Before we start thinking about the disruptive innovation in the talent development industry and how it might affect your business model, let’s offer a quick and dirty primer on the concept just to be sure we are talking about the same thing. First, disruptive innovations tend to be produced by outsiders to the industry in which they occur. The business environment of market leaders does not allow them to pursue disruption when they first arise, because the disruptions are yet to be proven and likely unprofitable enough at first. In addition, their development can take scarce resources away from sustaining innovations, which are needed to compete against current competition.

Oddly enough, the person most known for bringing the concept of disruptive innovation to us, Clayton Christensen, is now saying it is a victim of its own success in that the theory’s core concepts have been widely misunderstood and its basic tenets frequently misapplied. For example, many think any situation in which an industry is disturbed, where previously successful companies falter, is disruptive. More accurately, a disruptive innovation is one that creates a new market and value network and eventually disrupts an existing market and value network, displacing established market leaders and alliances.

Typically, the disruption itself comes from a smaller company with fewer resources able to challenge established businesses. While incumbents focus on improving their products and services, disruptors target those overlooked segments with more functionality and lower prices. In fact, Christensen challenges the common notion that Uber is even a disruptive innovation since while it is transforming the taxi business, it really isn’t disrupting it.

The criteria for disruptive innovation are twofold: It originates in low-end or new market footholds, and it doesn’t catch on with mainstream customers until quality catches up to its standards. Regarding low-end footholds, these are nonincumbent customers who are less demanding and just looking for “good enough” products. New-market footholds are those markets where none previously existed. A disruptive innovation starts from one of these two footholds.

Herein lies the difference between disruptive innovation and sustaining innovation, which involves making good products better in the eyes of the incumbent’s customers. Disruptive innovations are initially considered inferior by most of an incumbent’s customers, and therefore they are not willing to switch. So, according to Christensen, as far as Uber goes, most of their strategy seems to be around sustaining innovation with a service of better quality than taxis and with competitive if not lower pricing. And, as we have seen, many taxi companies are responding with their own hailing technologies, questioning the impact of Uber’s so-called disruption.

Disruption in the Talent Development Industry

All of which brings us back to what are the disruptive technologies affecting the talent development industry and how best can you react to them? If we now keep it simple and go back to the three major drivers of the industry we described as content, instruction, and delivery, there is little question some type of disruption is likely to emerge around delivery in the form of technology. Granted there may be some new unpredictable content, theories, or processes that emerge, but it is unlikely that they will totally disrupt the industry. Likewise, there may be some new learning theories or instructional techniques that surface, but it is also unlikely these will have significant impact on disrupting the industry. But can new technology innovations alone disrupt the industry? Probably not without equal treatment paid to its other two drivers—content and instruction. What this looks like is hard to predict, even though it’s likely to emerge.

The question is whether any of these content, instruction, or delivery innovations are really disruptive. From Christensen’s perspective, they aren’t. But, they all are significant changes that will undoubtedly have an impact on the industry. Furthermore, they could ultimately affect the future and success of your business model if not explored and incorporated into your offer. What are you doing to ensure that you will be protected from an unforeseeable yet inevitable industry disruption?

To learn more, check out my book page. Also, join me at ATD 2017 International Conference & Exposition for my session: How to Build and Grow a Successful Talent Development Business.