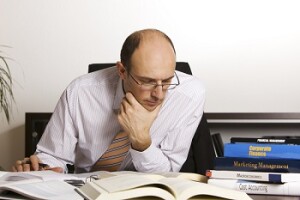 Let me tell you a story of failure in my life that caused me to lose confidence in myself.

When I joined the training section at work, I wanted to get a training certificate. I’d heard about a certificate in the United States that is considered the best in the field of training and development: the Certified Professional in Learning and Development (CPLP) certification. The certificate consists of two phases that have to be completed within two years. The first phase is a test in nine subjects, including performance improvement, instructional design, coaching, evaluation, managing learning programs, and change management. So I began the hard work to achieve my goal, and started studying.

I spent my annual vacation studying. After that, I traveled from Jeddah to Riyadh, where the test would take place. The test consisted of 150 questions in a period of only two hours! I failed in four subjects; it was the first time in my life that I’ve failed. I had to pick another date to do the test again. I thought the test would be the same as the previous one, but I found it was different. As a result, I succeeded in four subjects but failed in the other five. It was really shocking.

I thought the third time would be different and I would get over the failure. After signing up for the test again, I discovered the nine subjects had been expanded to 10. But this time I passed—just barely. After that, I prepared myself for the second phase of the CPLP, which was to create a training project in the field of instructional design. I worked hard on my project and sent it in with all original documents. Yet my score was 2.11, less than the required grade of three. Because of one simple mistake, all my efforts were for naught, like losing an Oscar that had seemed like a sure thing.

I learned that I had to submit another project entirely, because I couldn’t submit a revised version of an earlier project. It took all my time before and after work to complete my second project. It was my last chance to succeed. Otherwise, I would have to go back to the beginning, and complete the exam again. After I had completed the project, I sent it in and waited.

My grade was 3.09, which means that I finally succeeded! It took me two years to achieve my goal and see my name in TD magazine as a CPLP. After that, I tried to help Arabic candidates earn the CPLP in Mena by making YouTube videos in Arabic and a Facebook page for CPLP Arabic candidates about the importance and process of CPLP certification.

In my company, Nahdi Medical Company, top management sees me as a role model in overcoming challenges, and I act as a mentor for my colleagues who want to earn the CPLP. Now, in 2017, we have four CPLP credential-holders, and we’ve received the CPLP employer award.

Learn more about the CPLP Certification.

About the Author
Mohamed Ammar

Mohamed Ammar is a Certified Professional in Learning and Performance (CPLP) with 10 years of experience in retail sector. He is the learning and performance manager of Nahdi Medical Company, the largest retail pharmacy chain in the Middle East and North Africa. He has designed and delivered numerous learning programs to address development requirements of various categories of employees and lead individuals and teams into positive, productive action. Mohamed has a YouTube channel with several video lectures on CPLP coaching. He is also a certified project management professional (PMP), certified leadership coach, and led the Nahdi Academy to get CPLP Employer Award.