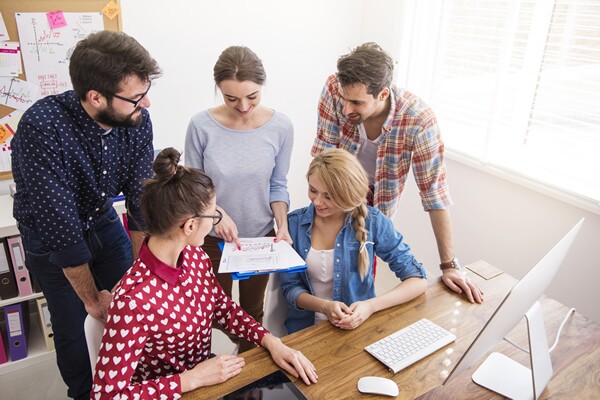 Millennials in the Workplace: Lost Hope or Our Only Hope?

As the chief learning officer and chief marketing officer of the nation’s largest business speakers’ bureau, I regularly meet with CEOs of Fortune 1000 and midsize companies all over the globe. Regardless of how our conversations begin, within 10 to 15 minutes they always arrive at the same question: “How do we deal with Millennials?”

The buzzword of the last few years is now a major reality for organizations on a global level. Generation Y, or Millennials, have mistakenly been stereotyped as entitled, self-centered, unmotivated, disrespectful, and disloyal, all of which contribute to a widespread misconception of their impact on organizations.

It wasn’t long ago that upstarts listened to Buddy Holly, the Beatles, or the Sex Pistols, and the business leaders and HR managers of those generations expressed concern that “these kids are gonna be a problem.” (Remember?) Funny how those “kids” who listened to Buddy, Ringo, and Syd are now the ones complaining about “these Millennial kids.”

It’s ironic that 1960s flower children—who were dropping out of school (and dropping other things too), and protesting against the establishment and their elders—are condemning the Millennial generation. What are these stereotypes based on? And how many are true? In this three-part series, we will take a look at the myths, misconceptions, and hard facts on Millennials in the workplace.

Leaders and hiring managers, do not despair; all is not lost. Millennials are actually the most educated generation in history, and they have a great deal to offer our society and organizations. It may simply come down to understanding and connecting with them. Let’s start with the basics.

“Who are Millennials and why are they the way they are? I just don’t understand them.”

According to Forbes, Millennials are those born between 1982 and 1993 and will make up about 75 percent of the workforce by 2025. Considering the most common stereotypes of Millennials—entitled, self-centered, unmotivated, disrespectful, and disloyal—you may ask, “Why are they the way they are?” It is likely because Millennial children have been raised differently from any other generation before them.

On the other hand, according to Ben Casnocha, HR thought leader and author of two New York Times bestselling books, Millennials are the first generation in more than a century who will earn less than their parents. That does not bode well for consumer product indexes, financial indexes, the real estate market, and several other leading economic indicators.

Accounting for this trend, Casnocha points to well-intentioned parents who believe that what worked for them a generation ago should work for their kids. According to him, “The problem is that our parents grew up being told that they should follow their passion, work hard and success would come. That worked for them in a broad sense and that’s what they kept telling us. Times have changed though; there has been a major paradigm shift in careers, upward mobility and the entire workplace.” This has created a sense of disillusionment among Millennials, who believe they were sold a “bill of goods.” As a result, they are constantly on the lookout for a well-paying job that gives them a sense of purpose—an increasingly elusive thing.

Some experts, including Michael Parrish Dudell (a Millennial himself), suggest that perhaps we were too permissive with this generation. As children, Millennials would often hear, “You’re a star, you are amazing, and you can be anything!” As encouraging as these words may seem, are they really sending the best message? The pursuit of straight As has given way to this new parental attitude of “do your best” (accompanied by a loving smile and a thumbs-up).

Bruce Tulgan’s Not Everyone Gets a Trophy is an excellent read that will help leaders and HR managers understand the generational gap between themselves and Millennials. In his book, Tulgan also explains how to best manage and engage with Millennials to get them “onboard and integrated into your company's culture.”

Millennials are entering the workforce in droves, and within 15 to 20 years they will be running our organizations. We need Millennials in the workforce today just as much as we will need them in the future. Boomers are in retirement, and it won’t be long before Gen Xers cash in their 401(k) plans. According to renowned geopolitical expert Peter Zeihan, many countries are in trouble with their younger workforce because the “usual pyramid demographics” are nonexistent. This isn't just a problem for company HR pipelines. Think of all the social security and entitlement programs that thrive on payroll taxes!

According to Zeihan (see images below), the United States is uniquely and beneficially positioned, thanks to Gen Y. With Millennials paying into entitlement programs such as Social Security, both Gen Xers and Boomers are in good shape. On the other hand, China’s relatively small Gen Y population could become problematic for the economy (which is perhaps why they have relaxed the one child per family rule), as is also the case in Canada. India has the opposite problem, with a Gen Y population too large for the country to effectively sustain. 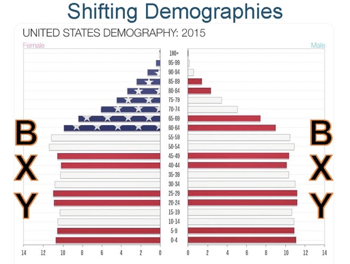 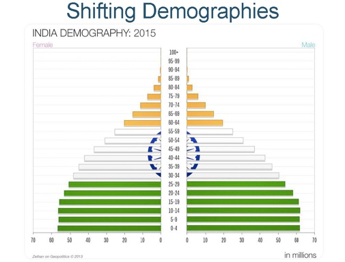 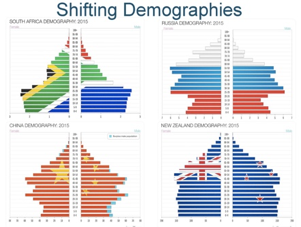 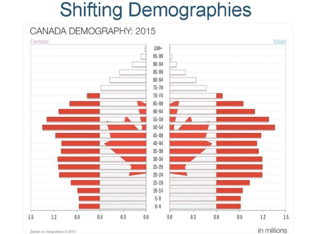 Clearly, the rise of Millennials poses a global challenge. I visited several major companies in Shanghai recently (EMC, Nike, Harley Davidson, and Bayer among them) whose biggest concern was attracting and retaining Millennial employees. Because of the single-child rule in China, kids grow up the center of their family’s universe. Raised with 100 percent love and attention from their parents and grandparents, their sense of entitlement rivals or perhaps surpasses Millennials in the United States. According to one HR manager at a major Chinese Fortune 100 company, “We have a major problem with Millennials. It’s a status symbol among their friends to ‘job hop’ every 18 months to a new company, and each time their salary is usually doubling.”

This new attitude presents two major hurdles for Shanghai employers: how to attract Millennials and convince them to join Company X in the first place, and how to retain them so that they don’t leave after 18 months. Imagine the recruiting, onboarding, and training costs for a new team member, let alone the learning curve. Just when the team member is getting up to speed, she leaves for another company that has offered double the salary. But this is no guarantee of longevity: The new company risks losing the employee, and all the resources that went into training, 18 months later.

So the next question you should be asking is: “How can my organization attract and retain Millennial workers?”