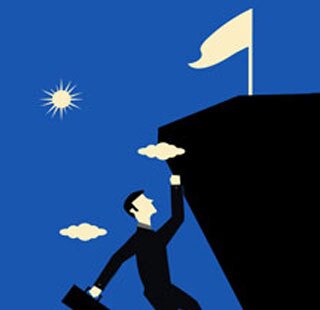 There are scores of “experts” who advocate that you can jump-start your career with a variety of tricks for winning the political game. However, our 30 years of research suggests the best way to move up the ladder is to produce results. Those who are most effective at influencing others to achieve stellar outcomes, are, over the long haul, more highly valued, more frequently promoted, and more satisfied with their careers. Nothing substitutes for results.

Here are some tips you can use to increase your influence repertoire and catapult your career:

How to influence upward. Few of us realize how much we are influenced by the data we regularly encounter. To profoundly affect the behavior of people above you, skillfully use the data at your disposal.

Example: One frustrated middle manager wanted to end the discouraging trend of delayed, failed, and cancelled projects in his department. Top executives often contributed to these frustrations by changing direction, failing to give support, and cutting back budgets after launch. So this clever influencer gathered data and published a report called, “Bang for the Buck.” He tracked the number of projects cancelled and completed. He gathered credible data on the costs of the missteps. The report found its way into the hands of higher-ups who made changes to avoid the costly mistakes. And his credibility rose enormously.

How to influence foot draggers. Most people have experienced the frustration of seeing things that need to change, but feeling incapable to rally support for change. Apathy has killed more ideas than outright resistance ever has. Stop trying to use logic, slide presentations, and other verbal tactics to motivate disinterested stakeholders. To engage people’s hearts and minds, design experiences—not lectures—that bring the need for change to life.

Example: One supervisor was very concerned about health conditions in the factory. He wrote numerous reports requesting better facility maintenance and describing the deplorable conditions. It wasn’t until he invited the facilities manager to a special lunch in the lunch room—which was interrupted by a rat the size of a housecat—that the manager took action.

How to influence peers. When attempting to make significant change, smart influencers seek out and involve opinion leaders—a powerful group of highly respected people whom others look to for guidance, clarity, and information.

Example: One clever manager attempted to resolve a feud that had gone on for years between her engineering function and the factory techs. Since she had no formal authority to demand attention for the issue, she sought opinion leaders within the factory group. She began a listening campaign to understand the group members’ needs and concerns. When she had secured the trust of these informal influencers, she asked for their help to assemble the rest of the group for a joint problem-solving session, which resulted in a miraculous change.

In our research, we have found dozens of influence skills people can use to get the best career boost possible—the boost that comes from creating positive change and producing stellar results. The bottom line is this: If you want to change your career, you should invest whatever is necessary to expand your influence repertoire.