Training Through the Google Glass 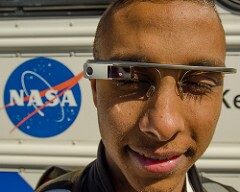 First off, want to thank ASTD Learning Technologies for having me – I’ve had a great time guest blogging this past month. For this post, unlike when I wrote about 3D printing and biometrics in training, I want to talk about a technology I haven’t “actually” seen yet: Google Glass.

Earlier in February, Google announced its latest project—essentially a pair of high-tech glasses. Google Glass is an augmented reality device, promising to eliminate the need to pull your phone out of your pocket. You put on the glasses, activate them with various voice commands, and perform popular functions such as navigation and photo capture. How can it do this? The interface is superimposed via the glass onto your environment.

Right now, Google is on the verge of making the product available to a handful of lucky testers, and it is slated to become widely available later this year.

Something about the way Google has been promoting this project caught my attention. They created a hashtag, #ifihadglass, that encourages the public to imagine potential uses for the technology. This is also how Google determined who would get early access to the device; those with the most promising or creative tweets were selected to cough up around $1,500 to become part of the technology elite. And even though the opportunity for early access is closed, the tag is being used every minute. Users are suggesting uses that range from a new museum experience to a way to supplement partial blindness, and yes, as a source of humor (this idea is by FAR the funniest).

The Twitter promotion is a bit gimmicky, and the first release of Google Glass is likely to be incapable of most of the imagined uses, but I think it’s interesting in that the public is encouraged to take an active role in product development—to design their own future experiences, to co-create with Google.

This bottom-up exploration of potential applications for new technologies is how I’ve approached these blog posts this month. So why not use my last post to consider contributing to #ifihadglass. So, if you had Glass, how might training be different?

There are two potential uses that come to mind. The first is onsite technical training and performance support. Imagine a technician, who needs both hands to perform her job, being guided through a repair step by step in real time while they actually perform the task. The superimposed interface could point out physical components, describe and model actions, and even provide feedback on how well the repair is progressing. If the mantra is that for most work-related development, just-in-time information in context packs the most powerful punch, and a device like Google Glass can open up a significant opportunity.

The second use that has potential is with role plays. I have designed countless role play exercises for clients, primarily for sales training. Some of the most effective techniques we used were to have a third person observe and give feedback against a clearly defined rubric, and most importantly, to let the participant see recorded footage of the role play. This footage allowed them to self-assess their performance and link feedback to tangible examples in the role play.

One of the challenges we faced was that pulling out a mobile device to record the role play was disruptive, and made participants hyper aware of the assessment component. It’s essentially the Observer Effect, put to people. If participants could wear Google Glass to record the role play, you could gain a more realistic picture of the experience. If you want to reflect on what the sales dialogue was like for the customer, what better way than to review footage from the customer’s actual perspective—without the disruption and distraction of a third party or the set-up of a recording device required? You may even be able one day to use them as performance support for conversations in real time: the customer says specific trigger words, prompting suggested insightful questions and key messages on the display without a break in the conversation.

I hope these posts have stimulated some thinking, or at least raised some questions about how our industry might leverage new technologies in the next five years. Good training design starts with evidence about how we learn most effectively. Combine that with a mentality of experimentation and rapid prototyping, and we can all leverage new technologies to create more engaging and effective experiences with relatively low cost and risk.

About the Author
Jessica Knox

Jessica Knox is a human performance specialist. She is currently cooking up a wild new way to approach team building as co-creator of Teamwave and acts as strategic advisor to Metrix Group, a custom learning solutions agency in Toronto.

Jessica is completing graduate studies in Digital Futures at OCADU and is commercializing Teamwave at the university’s startup incubator, the Imagination Catalyst. She also holds a M.Sc. in Biochemistry from UC Riverside, which comes in handy in the most unexpected situations, and a Certified Training and Development Professional (CTDP) designation from CSTD. You can find her on Twitter: @Jess_Knox.