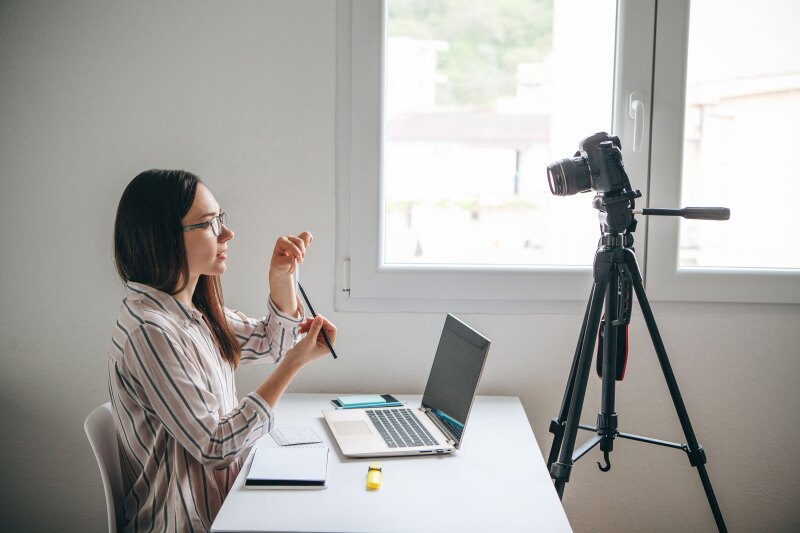 What Makes a Good Instructional Video?

In my recent post, we reviewed a few of the skills needed to make a good video. Now, let’s explore some key principles of video as an instructional modality.

First, video is visual. It’s a “show, don’t tell,” modality. Videos that are mostly talking heads or use narration to get the bulk of the message across make learning more difficult because people remember what they see more often than what they hear. Think about the last weather forecast you saw on TV. Do you remember what the meteorologist said or the fluffy clouds and sunshine icons you saw? I used to tell students in my broadcasting classes that the more they said on air, the more their audience would forget. It’s not especially scientific, but you’ll find this general principle guides today’s best TV producers. We could also say that in video, the more you show, the more they remember.

Second, the visual nature of video means it is not suitable for every learning topic or even certain elements of a topic because it struggles to convey complex content. Usually, I won’t use it to explain tax law or HR compliance issues. But I will use video to show learners how to use their badge to enter a building, how to make coffee, or to exemplify nonverbal communication skills. A simple rule to determine if a topic is suitable for video is to ask, “If I were in a classroom, would I demonstrate this topic?” If the answer is yes, video is most likely the best modality.

Third, in the talent development world, we don’t use video simply because we can or because it’s the latest technological fad. We use video to help our stakeholders build skills to meet their organization’s business needs. Our approach to video will be different than TV producers who make video to inform or entertain. This means we don’t need fancy effects like spinning logos or excessive use of green screen and gratuitous transitions. (I call these things video bling.) In fact, less than perfect production values can be OK sometimes as long as they lead to learning. That said, I’m not suggesting lazy production; we should still aim to do our best.

Fourth, fancy equipment does not make good video. I’ve been helping organizations around the globe transition to digital for more than a decade, and one of my common experiences is reviewing the list of equipment they want to buy. Often it adds up to $35,000 when only $3,000 for gear is needed for great results. Spending this extra money rarely leads to better-quality video. It reminds me of what a former BBC colleague told me when I ran the company’s TV training operation. It’s not the sophistication of your equipment that leads to good results. It’s the level of skills you have. Sure, there are minimum specs you need for video, but they’re generally lower than most people think.

You can read plenty of stories about YouTube stars who go from rags to riches by making engaging video content. They can make us think, “Gee, I could do that.” Despite close to three decades in media and talent development, I know few people who can. Most struggle to get to the point where they make quality video and consistently do it.
Advertisement

Sabrina nailed it, but it wasn’t easy. Like many in our profession, she describes herself as an accidental trainer. “I fell into training thinking I’d be a great fit because I’m good with people,” she told me. “But then in the classroom I felt like a deer in the headlights. We think it’s easy, but the dynamics are so complex.” She paused. “But I’m obviously a slow learner because I approached video the same way.” Her first few videos were good, but she couldn’t keep them at a consistently high quality. “I had no workflow. And I never knew why I got some shots right but others didn’t work.” In the end, she took a film course and learned core production skills along with the boring aspects (such as processes and procedures) about making video. Now she consistently turns out awesome training videos for her department, including that forthcoming one on ergonomics in the office.

For more detailed advice, join me in September for the next session of the Rapid Video Development for Learning Certificate program.

About the Author
Jonathan Halls

Jonathan Halls is an author, trainer, and coach. He wrote Confessions of a Corporate Trainer (ATD Press, 2019), Rapid Video Development for Trainers (ATD Press, 2012) and was a contributing author to Speak More (River Grove Books, 2012) and the ATD Handbook: The Definitive Reference for Training & Development 2nd Edition (ATD Press, 2014). He is author of the ATD Infoline, “Memory & Cognition in Learning” (ATD Press, 2014) and has written numerous articles for T&D magazine. Jonathan is an ATD BEST Awards reviewer and has sat on the advisory committees for the ASTD International Conference & Exposition and TechKnowledge.

The former BBC learning executive now runs workshops in media, communication, leadership, and creativity. He is on faculty at George Washington University and facilitates ATD’s Master Trainer Program ™, Training Certificate and Rapid Video for Learning Professionals Certificate program. Jonathan has been training, speaking, and coaching for 25 years in more than 20 countries. He describes his work as “at the intersection of media, communication, learning, leadership, and innovation.”