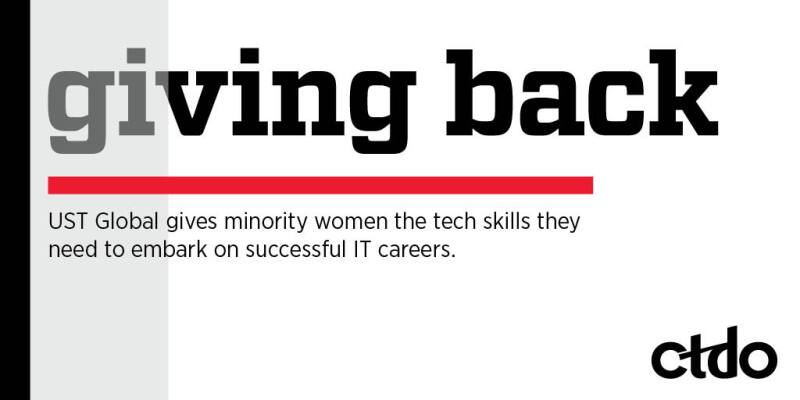 Bridging the Gap for Women in IT

UST Global gives minority women the tech skills they need to embark on successful IT careers.

For many industries, gender equality has become a core issue, with organization leaders emphasizing equal pay opportunities and promoting women to higher management levels. Yet advancing the role of women in the tech sector seems to have stalled.

Consider a few stats: The National Center for Women & Information Technology (NCWIT) reports that women held 57 percent of all professional occupations in 2015, but they held only 25 percent of all computing occupations. These numbers are even lower when considering women of color. According to NCWIT, Latinas and black women hold only 1 percent and 3 percent of these jobs, respectively. And research from NCWIT also reveals that even fewer women are found in technology leadership or the other kinds of key roles that have a significant influence on future innovation. These data concur with a study from Reuters, which found that 30 percent of 450 technology executives stated that their groups had no women in leadership positions.

Thus, women are becoming increasingly invisible in the thriving technology and computing field, a top industry around the globe and one of the fastest-growing professional occupations among U.S workers, with an estimated 1.8 million jobs in computing by 2018, according to the U.S. Department of Labor. UST Global, an Orange County, California-based provider of end-to-end digital solutions and IT services for Global 1000 companies, hopes to change that.

UST Global launched Step IT Up America in 2013 to address the dearth of women working in technology. The proprietary STEM program aims to create 5,000 new tech jobs by 2020 for minority women in urban areas. Sajan Pillai, CEO of UST Global, sees women as a way to fill the pipeline of talented IT workers.

"Diversity is a key factor in establishing a successful, innovative IT company," he says, adding that diversity allows companies fresh perspectives for strategies and new ideas. "Offering these amazing women this opportunity is simply doing what is best for the industry: providing great talent the resources to be leaders in the market."

To reach its goal, Step IT Up America started training and employing women in some of the largest cities in the United States, including Atlanta, Philadelphia, Detroit, Chicago, and Boston. The types of jobs it helps women become qualified for range from testers to programmers, to IT administrators.

But many were baffled when UST Global initially presented the idea. Some asked, "How can you train these women with no background of the corporate world and coding?" It seemed like a natural solution, though. UST Global already was training many of these same skills to graduate students who were new hires. In fact, most IT companies have internal training and skill development programs, but they focus on working with computer science and engineering students—not the population Step IT Up America targets.

Inclusion and investment in action

The conventional path of many IT careers is to study computer science in college, obtain an internship at a tech company, and eventually work your way to a full-time job at an IT firm or an organization's tech department. But that path leaves out a lot of potential talent, namely women who lack a formal STEM education.

To help such women bridge this gap, Step IT Up America seeks out those who have a minimum of a high school diploma or are enrolled in a two-year degree or other college program, and who can commit to eight hours of paid training a day. UST Global works directly with community leaders, foundations, organizations, employment agencies, community colleges, and other venues to find the right candidates. The program then identifies outstanding talent through an assessment that measures reading comprehension, mathematical skills, and analytical aptitude. These women also are evaluated on their soft skills and business understanding.

Next, the selected candidates go through an intense 60- to 100-day boot camp training program against pre-identified job opportunities. That part of the program relies on active involvement of customers in co-creating the curriculum and also in establishing buddy systems and mentorship to the trainees. Skills such as business analysis, visualization, quality assurance, project coordination, and computer programming; and coding skills such as Java, .NET, and COBOL are covered. The training also includes soft skills development, enhancement of presentation skills, and professional mentoring.

Single mom Annalishea Pérez, who participated in the inaugural Step IT Up America program in Atlanta, has benefited from the training. "Although I've always wanted to work in the corporate world, I didn't know what it took to thrive in the corporate environment," she says.

A Latina and black woman, Pérez was raised with the expectation to graduate high school, but little more. She had greater ambitions, though, so Pérez not only received her high school diploma but is the first in her family to earn an associate degree in applied science. However, Pérez was unsure about what to do after earning her degree. Fortunately, a school adviser informed her about Step IT Up America.

"The process was very difficult for me, mainly because of the technical part of software testing. I stayed up many nights past midnight trying to study and pass two weekly tests, and grasp the concept of it all. It was all hard but well worth it," Pérez explains.

Pérez adds that Step IT Up not only taught her technical skills but also interpersonal skills, as well as how to dress and carry herself as a professional. "I was extremely shy and almost afraid to talk to people of a higher professional status. They helped me overcome my shy, timid ways. My coach gave me a daily assignment to talk to five strangers a day, which made me come out of my shell," she says.

UST Global's leaders are driven by a larger purpose of transforming lives. The company was founded with the intention to be a successful business that serves the greater good in society, and one of its goals is to contribute positively to the communities in which it operates. Step IT Up America is a widely successful example of how the tech company has seamlessly merged its mission to transform lives with the purpose of doing high-quality technology work for its customers.

Since the program's inception in 2013, thousands of women have registered for Step IT Up America, and hundreds of associates have been deployed at more than 15 customer organizations. By the end of 2016, the program had more than 500 graduates, serving a demography that has been traditionally under-represented in the IT field.

Based on that success, UST Global recently launched the program in Europe. Women currently comprise only 30 percent of the 7 million people working in Europe's digital sector, but according to the European commission, encouraging more women into IT could boost the European Union's gross domestic product by 9 billion euros a year. In addition, a program geared toward training veterans is helping returning warriors find new careers.

But make no mistake: This is not charity; it's good business. UST Global is giving people skills for jobs where it makes commercial sense to invest. What's more, the company's undeterred focus on transforming lives through technology and education presents other IT organizations with a formula on how to train and employ women in this expanding industry.

"Step IT Up America is a strategic platform for us in not only transforming communities with better economic opportunities, but also in creating significant and sustained effort to help bring more talent that will contribute towards the development of a knowledge economy," says UST Global.

UST Global is a digital technology services company that provides next-generation digital solutions, creating BETTERFUTURES for Global 1000 companies. Its mission is to “Transform Lives” using the power of digital technologies. Headquartered in Aliso Viejo, California, the company has more than 17,000 associates operating in 25 countries across four continents.

Are You Giving Back?

Giving back to our communities doesn’t just mean reaching into our wallets. Many nonprofits and community organizations can use the skill sets of talent development professionals. How do you define “giving back” and how do you think it affects your organization? What are you or your employees and organization doing to give back to the profession or society at large? CTDO would love to share your giving back story.

Contact Ann Parker, senior manager of the Association for Talent Development’s Senior Leaders & Executives Community of Practice, with your ideas and stories.