(Alexandria, VA) August 10, 2018—The Association for Talent Development (ATD), the world’s largest membership organization for professionals who develop talent in the workplace, is pleased to announce that global media leader Oprah Winfrey will be the opening keynote speaker on Monday, May 20, during its International Conference & Exposition in Washington, D.C. 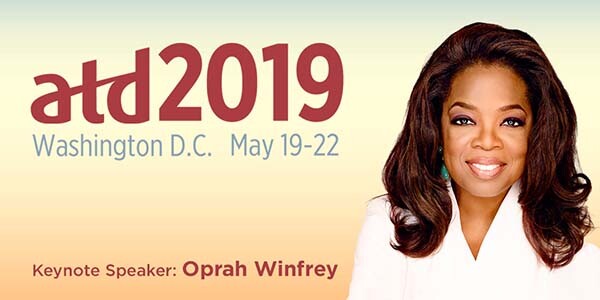 The ATD International Conference & Exposition attracts a global audience of attendees from more than 90 countries. These professionals discuss best practices in developing the knowledge and skills of today’s workforce, new methods for delivering learning globally, and how to measure the impact of their work, among many other topics. ATD 2019 will feature:


The ATD International Conference features the largest EXPO dedicated to the talent development field, with more than 400 suppliers showcasing the latest technology and trends in learning.

ATD 2019 will take place May 19-22 at the Walter E. Washington Convention Center in Washington, D.C. Registration is open online at www.atdconference.org, and special preconference rates are available for a limited time. Follow ATD and updates about the conference on Facebook, Instagram, LinkedIn, and Twitter (#ATD2019).

Oprah Winfrey has created an unparalleled connection with people around the world, with her accomplishments establishing her as one of the most respected and admired figures today. Winfrey was host of the award-winning talk show The Oprah Winfrey Show for 25 years, and currently serves as Chairman and CEO of OWN: Oprah Winfrey Network. She is the founder of O, The Oprah Magazine and oversees Harpo Films. Winfrey is an Academy Award–nominated actress for her role in The Color Purple, and was a producer and actress in the Academy Award–winning film Selma. Winfrey starred in the Emmy Award-nominated HBO Films The Immortal Life of Henrietta Lacks, and portrayed Mrs. Which in Disney’s Wrinkle in Time film adaptation by director Ava DuVernay.

In October 2015, Winfrey joined the board of directors for Weight Watchers, and in 2017 launched the food line “O, That’s Good” in collaboration with Kraft Heinz. In 2007, Winfrey established the Oprah Winfrey Leadership Academy for Girls in South Africa to provide education for academically gifted girls from disadvantaged backgrounds. In 2013, Winfrey was awarded the Medal of Freedom, the nation’s highest civilian honor. Winfrey is a founding donor of the Smithsonian’s National Museum of African American History and Culture. In June 2018, the museum opened “Watching Oprah: The Oprah Winfrey Show and American Culture,” an exhibit exploring Winfrey’s life and her talk show’s impact, featuring artifacts from the set, costumes from her movies, and interactive interviews.

About ATD
The Association for Talent Development (ATD) is the world’s largest professional membership organization supporting those who develop the knowledge and skills of employees, improve performance, and help to achieve results for the organizations they serve. Originally established in 1943, the association was previously known as the American Society for Training & Development (ASTD).