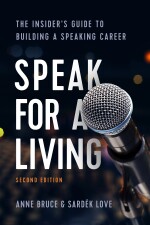 Speak for a Living, 2nd Edition

The Insider's Guide to Building a Speaking Career
By Anne Bruce Sardek Love
Bookmark
Share
Sample Chapter
Pricing
Save when you buy in bulk.

Get into the business of speaking and training.

There are dozens of books on public speaking. But only Speak for a Living will show you how to launch, build, and sustain a successful speaking and training career.

Wondering whether making the leap into this industry is for you? In this revised and expanded edition, authors Anne Bruce and Sardék Love offer updated strategies for navigating the public-speaking business. Their new material on social media and website marketing will help you find your niche and create a unique brand that reaches the right audience. They’ll show you how to diversify your services in an increasingly globalized industry, whether through booking international gigs, getting published, or developing new products. And they’ll use their years of experience to help you avoid the mistakes so many speakers and trainers make.

Speak for a Living also has field-tested tools and checklists that all speakers and trainers will find valuable, whether they’re new to the profession or old pros. Use them to identify ideal clients, prepare for any presentation, and become a meeting or event planner’s dream speaker. And if you want to sharpen your performance skills, the book has a whole chapter on how to take your abilities to the next level.

Speak for a Living is the ultimate insider’s guide. Use it to gain insight into the professional speaking lifestyle and become the speaker or trainer people request again and again.

Bonus Content: Sample Pre-Event Questionnaire
Use the sample pre-event questionnaire from Speak for a Living to help you customize each presentation to meet the goals your client has set. Download the sample questionnaire.

David Jennings
February 24, 2021 08:34 AM
I recommend this book. I've known Sardek for a long time. His example and lessons learned, as well as those of his co-author, can benefit others who are exploring similar paths.
Sorry! Something went wrong on our end. Please try again later.

Kimberly Martin
December 11, 2018 11:19 AM
I bought the book several months ago and I'm currently looking for a downloadable copy of the pre-event questionnaire. the link provided in the book sent me to this page. Thanks in advance.