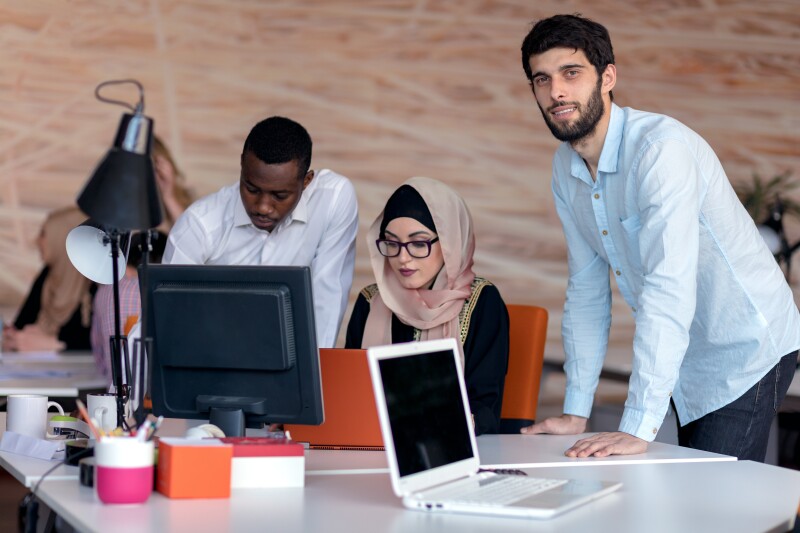 Companies need multilingual employees more than ever. There is an array of options for helping employees acquire language skills but deciding among those options isn’t easy. The best choice depends on a company’s specific needs and situation. Before making a decision, it’s important to understand your company’s goals for language training and the strengths and weaknesses of all the available options.

Pros: Apps are affordable and accessible. Language learners can use them just about anywhere and anytime, which means that they can turn their working out, commuting, or even doing their laundry into language study time.

Cons: No matter how awesome an app is, it just doesn’t compare with conversational practice with a real person. Also, studies show that most students lose interest after a few months. Apps alone will never make a language learner totally fluent; interacting with an instructor, whether in person or online, is just more motivating and encouraging.

Best for: Apps are a great starting point for anyone who is just becoming interested in learning a language (for example, an employee who travels to Japan once a year and just wants to know salutations, or someone who will have occasional interactions with Japanese clients and wants to say greetings and goodbyes). Apps can accelerate progress or be a great supplement when an employee is taking lessons with a live instructor. They can reinforce what a student is learning in class and spur ideas for things to talk about with the instructor.

Pros: For anyone who has a schedule that makes it difficult to work with a live instructor, self-paced modules allow them to still study a new language and hear recordings of native speakers using that language.

Cons: Like apps, self-paced modules just can’t provide that conversational practice that’s so essential to learning a new language. A student won’t be prepared for real-world conversations if they’ve never conversed during their studies. Modules also aren’t as customizable as in-person lessons. If a language learner has to spend time practicing vocabulary that’s not relevant to them, it’s easy to get bored, and lose motivation for long-term learning. (At least 300 hours of conversation are needed for any basic level of conversation.) And without an instructor, the learner isn’t getting feedback to help improve their accent in their new language and sound more like a native speaker.

Best for: Self-paced modules are a useful supplement to in-person language lessons, especially for someone who is in a hurry to gain fluency and build vocabulary (for example, an employee who has an extended business trip to Japan next month).

Pros: Working with a live instructor, whether in-person or online, is the most effective way to learn a second language. It mirrors the way we all learned our first language, and it prepares us to have real conversations. Think about it: When we first learned to talk, we did so because we wanted to communicate with the people around us, so we listened to them and mimicked them. A live instructor understands each student’s needs and cares about their progress. They can become a friend who opens the door into a new culture and customize classes for each language learner. Students won’t learn irrelevant information because the instructor will teach only what they need.

Cons: One-on-one language training with a native speaker (which we recommend rather than group classes) is more expensive than language apps or self-paced modules. Those added costs, (and the time commitment of two hours a week over a few years for each language learner), however, are more than outweighed by the money that companies save by avoiding the productivity bottlenecks caused by language barriers.

Best for: Because they offer conversational practice, in-person classes create fluency faster. That makes them the clear choice in time-sensitive, high-stakes situations like international relocations (for example, a high-potential employee has just accepted a long-term assignment to Japan).

About the Author
Micah Bellieu

Micah Bellieu, CEO and founder of Fluency Corp, has been in the field of language acquisition for over 20 years. Since turning 25, she has acquired Spanish, French, and Japanese language— all through real conversations with native speakers, of course

1 Comment
Sign In to Post a Comment
Sign In
BS
Bushra Siddiqui
October 12, 2019 03:43 PM
Compliments to you on the well-written piece. I am also very interested in this topic and we have built a unique platform that caters to all employee needs and a lot more. It connects the entire people chain and is designed for the Future of Work. Inviting you to check it here - www.peoplehum.com/#bl