Can Video Games Make You Nicer? 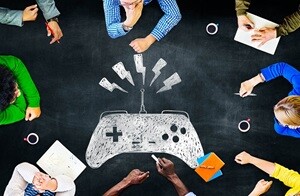 It turns out that flying around a virtual world as a superhero made subjects nicer in the physical world than subjects who flew around on a virtual helicopter, according to a study conducted by Stanford University’s Virtual Human Interaction Lab. The study immersed 30 male and 30 female participants in a virtual world and assigned them either to play a superhero character who could fly or become a passenger in a helicopter. The subjects were then directed to either join a tour of the city or to save a lost diabetic child in dire need of insulin.

After the game was over, participants waited as the researcher then “accidentally” spilled a cup of pens a few feet away. The results were interesting.

This is interesting by itself but when you combine it with the results of other similar studies, it becomes clear that pro-social games can and do influence behavior positively. Pro-social games are games that attempt to have a positive influence on people as opposed to violent games like first person shooters where the goal is to kill or hurt others.

A growing body of research has shown that pro-social games—games in which the player is helping others—have a positive influence on pro-social behavior.

In a study led by Douglas A. Gentil from Iowa State University, with researchers from around the world, the findings indicated that video games in which game characters help and support each other in nonviolent ways increase both short-term and long-term pro-social behaviors. The research team reported on three studies conducted in three countries with three age groups.

In another study, researchers wanted to see if a person’s empathic reactions to social issues could be influenced by playing an interactive digital game. The study focused on a game called “Darfur is Dying.” It is a narrative-based game where the player, from the perspective of a displaced refuge, negotiates forces that threaten the survival of his or her refugee camp. It is meant to highlight the plight of people who have been displaced by the fighting in the Sudan region of Africa. Two experiments were conducted.

The first experiment demonstrated that playing the “Darfur is Dying” game and resulted in greater willingness to help the Darfurian people than reading a text conveying the same information. The second experiment added a game watching condition and results were found such that game playing resulted in greater role-taking and willingness to help than game watching and text reading. The study provides empirical evidence that interactive digital games are more effective than non-interactive presentation modes in influencing people’s empathic reactions to social issues.

These positive effects pro-social games is just one more reason to consider using games for your training requirements. The results of using a game can be far larger than merely knowledge transfer, if designed properly; they can impact behavior in a positive manner. So imagine if you created a game to teach positive behaviors related to customer service. The customer service representative plays the short game and then interacts with the customer, the pro-social elements may transfer to the customer service representative and he or she is then more helpful and friendly than they might otherwise be had they not played the pro-social game.

So consider building positive behaviors into the games your learners play and not only will they learn but they may be nicer as well.