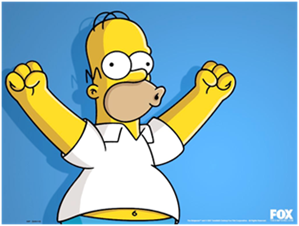 There really is a "Homer Simpson" effect in neuroscience. The phenomenon was given this name in honor of the Fox network character, Homer Simpson. Homer once told Marge, "Every time I learn something new, it pushes some old stuff out of my brain."

Who knew Homer was such a brilliant neuroscientist?

This “unlearning to learn” behavior probably helped our ancestors develop increasingly more effective survival strategies, rather than sticking with things we already knew. When you are in the middle of the process, however, it can be just as vexing as it is helpful.

If you are teaching people a change to an existing process or a new procedure that is similar to, but also different from a previous one, you need to allow some extra time for learners to integrate prior and new learning. If learners need to go back on the job and use both bodies of knowledge, there may be a temporary drop in the performance of the earlier skill while their brains struggle to integrate and also separate the two.

An Example from Essentials of Brain-Based Learning

I observed the Homer Simpson Effect firsthand while teaching a recent session of Essentials of Brain-Based Learning for ATD. My audience was comprised of experienced learning professionals. I knew that many of the adult learning techniques these participants already knew would be seen in a new light by the end of our three sessions together, as seen through the lens of neuroscience.

However, during the first two weeks of the online workshop, I noticed that most participants tended to question everything they already knew about learning. Their brains were clearing the way for new information to settle in. By our last session they were starting to integrate the new brain-based practices into their existing body of knowledge.

If you are teaching a new skill that has similarities to a previously learned skill, here are a few things to keep in mind:

In Essentials of Brain-Based Learning, I was aware that the Homer Simpson effect might apply, so I built in many references to instructional design before we knew how the brain learns. Some of those earlier techniques are still quite relevant, while others need to be replaced by more recent findings.
It’s funny how our brains work. Just because I’m aware of certain revelations coming out of neuroscience doesn’t mean that my brain is any smarter. I recently learned how to use Adobe FrameMaker to fulfill a client's request for a technical manual. After working on that project for several weeks, I found myself staring blankly at a blank screen in Microsoft Word, unable to remember where to begin to write a new document.