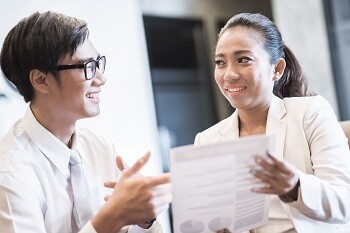 What Is Feedback, Why Is It Important, and How Do We Do It?

Over the past 60 years and more, feedback has become a staple in the jargon and behavior of management. Stemming from its use in the post–World War II human relations movement, it remains an often misunderstood, sometimes misused, and even abused tool in supervisory practices, team building, and leadership development.

Feedback is the ability and willingness to provide descriptive information about how an individual, team, or organization conducts itself in doing its business—and the impact that conduct has on others and on the final product or outcome. Typically, feedback focuses on how something is done and the behaviors being experienced. Outcomes, or the “what” of a project, are, of course, important. But, feedback is most useful in making adjustments and improvements along the road to the final product.

Done well, feedback is the most essential of our skills, because the information it provides gives those involved real choices and the ability to determine whether they are on track. And here is where the problems with feedback arise. People want to be right, successful, and praised in their efforts. In our conflict-averse society, criticism is often avoided, and looking good becomes our universal, but unstated, goal. This is why feedback is so often feared. Our fragile egos drive us toward mediocrity rather than excellence, and feedback (if ever offered) becomes personal.

In more than 40 years working with teams and organizations, we have found that groups who are the highest performing are the ones where feedback is a demonstrated core value. Rather than merely being written on posters, feedback is an observable norm of the team or organization, actively being sought in everything that is done. These are places where people are ruthlessly honest, yet know how to provide feedback in ways that are constructive and welcomed by anyone who dares to live by these rigorous standards. The primary motivation for every individual must be to help one another be the best they can be, and that leads to organizational excellence.

The Three Rules of Feedback

The good news is that there are only three basic rules of feedback—and they’re easy to remember and relatively easy to use:

When you next find yourself in a position where you would like to give feedback to somebody, first ask yourself if you are doing it in order to help them or help yourself? If this is an opportunity to show them how good you are or teach them a lesson or make them feel inadequate, then it is probably best to keep it to yourself. But if you genuinely want to help them, how about asking if they want feedback, first? Give them the option to gracefully decline or take a rain check.

A team or an individual may have the skill of both giving and receiving feedback, but without the trust of others involved, it will rarely prevail. Trust is an outcome of many possible variables. There are thousands of books and articles on the nature of trust. Here are a few techniques that work for us.

There needs to be some care and familiarity among those giving and receiving feedback. Traditional team-building activities can work, but it cannot be assumed that people will risk providing feedback if positive relationships have not been cultivated. The same is true of being willing and interested in receiving feedback from someone. If I don’t believe you have some relationship with me that has demonstrated you care about my own growth and outcomes, my interest in receiving feedback from you will be limited. Here we are talking mostly about face-to-face feedback when discussing ongoing working relationships and issues. It implies real risk and real engagement, and those will tend to flourish if people know one another and want to be helpful.

However, in less personal feedback involving written responses and scaled items where the feedback is part of a larger objective (and directed at a more general audience), the amount of familiarity is less important. Still, if the feedback is role-specific and those giving the information have a belief that their feedback will be taken seriously and used to increase an individual’s or group’s effectiveness, building personal trust and familiarity can be effective. When positive outcomes from feedback are observed over time, trust will be the result at the level of individual and team performance, and feedback will be increasingly easy to give.

Feedback is especially effective when people work interdependently, and the outcomes they provide have both mutual benefits and shared consequences for those involved in the giving and receiving of feedback. As one would suspect, where trust is limited and has not been established, dysfunction can easily result.

Conflict is present in many work situations. If those expected to give and receive feedback have no belief that conflict will be addressed and resolved fairly, the first thing to disappear will be the willingness to engage in meaningful feedback. Feedback is a high-risk activity. If done consistently well, it can thrive. If people are willing to commit to giving and receiving feedback (and building the mutual trust and respect that it entails), other conflicts tend to become less onerous.

Finally, in any situation where feedback is to be used successfully, the leaders of the team, committee, or larger organization must be willing and skilled in its use. They must solicit feedback regularly, respond to it openly, and be able to model it effectively. If such skills and behavior are not witnessed by others, feedback as a meaningful part of the culture will not occur. As a lived value, feedback promotes honesty, respect, and candor as well as other core values.

The more you practice giving feedback in this way, the more comfortable it becomes, and the more people will seek you out to ask for feedback. So, get out there and start practicing! In part two of this blog post, I’ll share a method for including an outside observer in meetings as a way to improve the process of giving and receiving feedback.