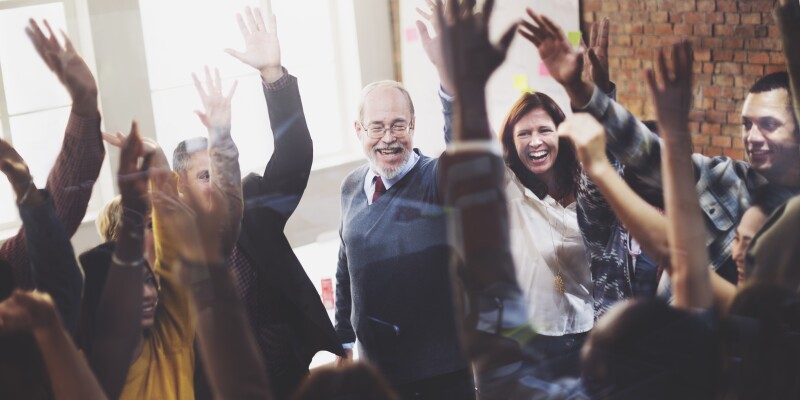 Flip the Script on Ownership and Failure to Drive Organizational Success

It’s fairly common to externalize failure. What can leaders do to inspire greater levels of ownership for delivering on key objectives, even when failure is completely justified?

There is a growing body of research to support what one may already suspect—that those with an internal locus of control are happier and more confident in their ability to influence outcomes through their own actions.

How can leaders translate this into the workforce to drive success and boost employee engagement? We explore this question in our new leadership book Propeller: Accelerating Change by Getting Accountability Right, proposing that the most powerful thing a leader can do today is shift employees’ narrative from, “It’s not my problem,” to a narrative of personal and team accountability.

What It Means to Fall Below and Rise Above

Days are jam-packed, goals are high, and the to-do lists are seemingly endless, making it easy for employees to adopt an external locus of control. At Partners In Leadership, we describe this type of thinking as “ below the line.” Falling below the line—making excuses, denying responsibility, finger-pointing, and exuding outright frustration—can provide a sense of temporary relief. In fact, venting can even be therapeutic, releasing pent-up stress and tension.
Unfortunately, when employees at all levels operate below the line, organizations get into trouble. Below-the-line thinking stymies teamwork, productivity, growth, operational efficiency, and overall performance.

To truly drive results, leaders must foster above-the-line thinking. Employees who are above the line have a deeply entrenched sense of personal accountability. This means they feel personally committed to achieving key results, the top three to five meaningful, measurable, memorable organizational objectives.

Accountable employees go the extra mile, digging deep to develop innovative solutions to tough problems rather than passing off responsibility to others. These employees feel a greater sense of control and are highly engaged in the work needed to propel the company toward success.

Success Story: Surfacing From a Life Below the Line

The CEO of a major retail corporation with nearly 1,000 stores nationwide faced a daunting challenge: The company was in its eighth consecutive year of declining performance, and despite his best efforts, no initiative had successfully turned it around.

After several members of upper management suggested accountability development for their workforce, the leader acquiesced. The company conducted a pilot with 50 store locations, hosting workshops that sought to define accountability and tie employees’ day-to-day actions— such as selling a new pair of shoes or processing a return—directly to the key results defined by the leadership team. The leadership team clarified and reinforced the notion that employees are not cogs in a machine but instrumental drivers in the overall success of their team and organization. Simply put, they gave the power back to the employees.

In a matter of weeks, all of the pilot locations were outperforming the organization’s other stores. The CEO determined that cultivating greater accountability among all employees in every location would translate to millions of dollars funneled directly into the company’s bottom line.

Still, he remained unconvinced of the sustainability of accountability in the workplace. He decided to visit each of the pilot stores and evaluate. On his first visit, a woman who’d worked at the company for 22 years approached him with tears in her eyes. She explained that she had spent her entire life complaining, thinking everything was outside her control and blaming other people and events for the shortcomings in her life. She had always assumed she had no way out. During the accountability workshop at her store, something clicked for her. She finally realized that it had been her own choice to live below the line for so many years. She made a vow to stay above the line moving forward.

The CEO continued to hear stories like this as he visited the pilot locations across the country. He quickly realized that, if accountability development could enact this level of fundamental change in individuals, it had the power to turn the tide for the entire organization. He wasn’t wrong. In a few months' time, the company had reversed its eight-year slide and was trending toward major growth.

How to Get Employees Above the Line

Leaders are responsible for flipping the script from, “This isn’t my fault, and I’m not responsible for fixing it,” to “I’ve identified this issue, and here’s how I think we can solve it.” To accomplish this, leaders must first look inward.

Leaders who fall below the line—denying responsibility or blaming others—give license to everyone on the team to do the same. A leader who embodies accountability doesn’t make excuses; they identify obstacles and take action to solve them. Take the example above. When the CEO realized his company was going nowhere but down, he didn’t point the finger. Instead, he developed solutions, ultimately landing on the accountability development that freed an entire workforce in desperate need of a culture shift. He didn’t tell them what was required of them to generate change; he simply created an opportunity for them to own the improvement process. The employees internalized this and began implementing the “see it, own it, solve it, do it” steps to accountability in their daily endeavors.

A New Narrative for Success

When accountability isn’t in play and performance plummets, it’s up to leaders to shift the narrative. Instead of asking employees why they aren’t getting results and penalizing them for failed attempts, ask what they can do to change the status quo and empower them to recognize their agency in driving organizational success.

According to our workplace accountability study, 96 percent of leaders believe that culture has a greater impact on business results than strategy. It’s time to take this to heart and write the story we want our company to tell, starting with a culture of accountability.

To learn more about redefining accountability in your organization, listen to the authors discuss Propeller: Accelerating Change by Getting Accountability Right.

Tanner Corbridge is a senior partner at Partners In Leadership. He has led large-scale transformation projects with Fortune 1000 clients across numerous global industries, including 10 of the 30 Dow Jones Index companies.

About the Author
Jared Jones

Jared Jones is a senior partner at Partners In Leadership. He has consulted with CEOs and senior leadership teams in some of the most successful organizations in the world, including more than half of the Fortune 50 companies.

1 Comment
Sign In to Post a Comment
Sign In
BS
Bushra Siddiqui
October 03, 2019 12:17 PM
Artificial intelligence and machine learning will have a major impact on HR as well as employment in the coming time. HRs are highly betting on this technology so that they can work towards improving employee engagement and performance. Check out peopleHum today - www.peoplehum.com/#bl