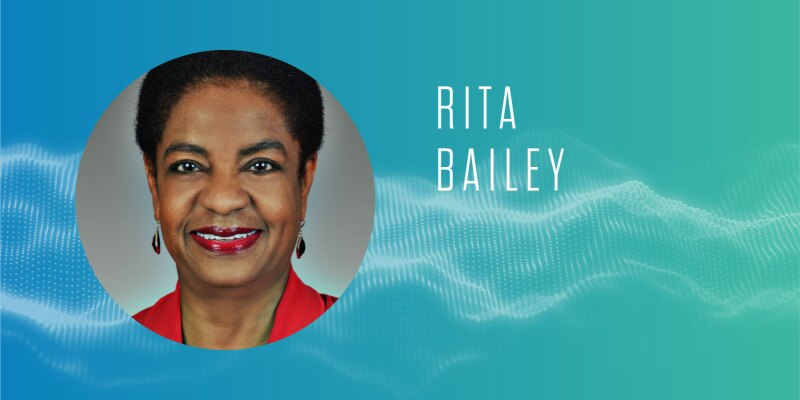 Leadership in This Epic Storm

“On New Year’s Eve 2019, our hero George was excited, looking forward to the year 2020, which he anticipated being a banner year for him and his company.” That’s how Rita Bailey, founder of Up To Something, began the story she used as the basis of her keynote speech on Tuesday during the Association for Talent Development’s Virtual Conference: Unleash Potential.

However, 2020 has been anything but a banner year. COVID-19, which we first hoped would be a relatively short-lived virus, has become a full pandemic and shut down many businesses (some permanently) and forced numerous employees to work from home. Bailey continued detailing her hypothetical hero. During this time, George has been facing uncertainty for his own and his employees’ health. He wonders what he is going to do as a leader and as an individual.

George’s leadership challenges have only grown in 2020 with additional external events in the US—racial justice protests, climate disasters, and deep divides as the presidential election approaches. While many leaders may have become reactive in situations such as this, George hasn't.

Zoom Fatigue and the Lengthening Upheaval

Bailey continued relaying the hypothetical situation: George’s organization has a strong social culture where team members like to interact face to face. Prepandemic, George enjoyed walking around to see employees in person. Because that isn’t possible with a remote workforce, George has needed to be resilient so that his employees can be as well. 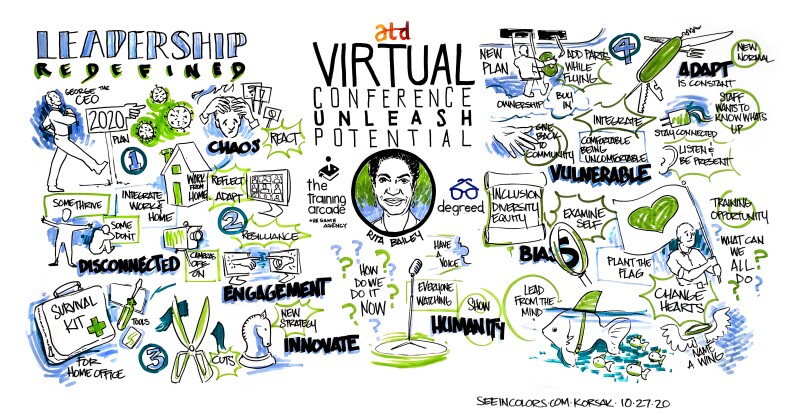 Sketchnotes provided by See In Colors

He can’t change the situation. As for so many of us, meetings and other interactions in George’s company occur via Zoom. George could have mandated that employees have all their meetings with the camera on, but he recognizes that one shoe doesn’t fit all, so he has sought to understand employee preferences. Some, for example, may be embarrassed with their space, not wanting it visible. Others believe in keeping work and home life separate. George has one-on-ones with staff to learn more and try to appreciate their unique circumstances. He has explained that he would like employees to have at least some of their meetings with cameras on because it encourages a stronger connection among staff.

For himself, George spends his time outside of work with the community, neighbors, and kids, integrating aspects of his life that he often neglected because he was busy. For his employees, George has further sought to maintain engagement, although he knows he will have to get creative. For instance, he sent employees a goody box to emphasize that they are still part of a team and that he is still thinking of them. The survival tools in the box enable employees to work at home more efficiently. He also has allowed employees to take home large monitors and other items from their on-site office so they can work more productively and comfortably.

As the pandemic has continued, business has decreased. George now knows he will need to furlough some employees, a decision he doesn’t make lightly. He has extended early outs, offered extended periods of leave, offered new roles, and helped some find work at other organizations.

He has revisited the company’s strategy, making a contingency plan, understanding that the goals he had at the beginning of the year are unsustainable. Indeed, George needs to stretch himself and re-evaluate every aspect of his business to answer the question “How are we going to do business now?”

During times of disruption, employees need leaders such as George to lead from the front. Just as with his staff, things are difficult for George, but he can’t show his anxiety. Employees take a page from their leaders, and they will sense his anxiety and become anxious themselves. Still, George needs to show vulnerability, be transparent, and be less than perfect—in other words, he needs to be human.

In addition to COVID-19 and the economic turmoil, the current reality in the US includes complex racial challenges. Again, George has realized that this is playing out differently for employees. To connect with people where they are, he has built in time for one-on-ones and small team meetings.

George doesn’t have all the answers to questions about work challenges, including how to move the business forward. He knows he needs diverse perspectives, and he wants employee buy-in for the company’s new direction.

Bailey reiterated: Things are continually changing, and none of us know how 2020 will end. To be successful in this new, unfolding normal, leaders need to be authentic, show their humanity, be empathetic, and listen. George knows that he needs to adapt and overcommunicate with employees. He needs to share not only the what but also the why relative to decisions he is making.

Get Comfortable Being Uncomfortable

As George’s organization has moved forward, employees have been faced with a restructured workplace. The new workforce, workspace, and activities need to be integrated for the company to be successful. When speaking with employees, George uses their names more frequently than he may have otherwise. That conveys a level of communication that is happening person to person, not leader to employee. He does his best to show that he is being present during the conversations.

At this time as well, employees—who have always contributed to their community—are reinvigorating their efforts to give back. The community, after all, has helped the business throughout the years. Now it is employees’ opportunity to double their efforts.

Whether you’re a leader and you commit to the tenets of CEO Action for Diversity & Inclusion or you are a talent development professional who can help leaders better communicate and adapt, we all have a sphere of influence in which we can take positive action. Bailey noted during her keynote address that it’s never been more important to consider how we’re showing up. To close out her story of George and what leadership redefined means, she used Brené Brown’s words: “Who we are is how we lead.”