Leading the Federal Workforce Through the Presidential Transition 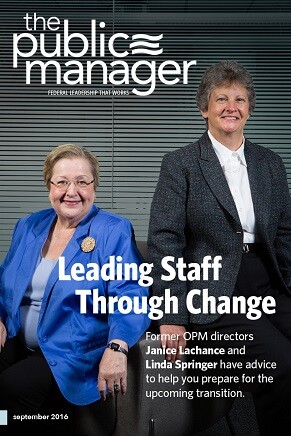 When a change in administrations is imminent, it's understandable that federal employees will start to worry about their futures. A new administration means new leadership, and new leaders may bring changes in agency priority and focus. Janice Lachance and Linda Springer, both former directors of the Office of Personnel Management, have experience leading federal staff through these transitions.  For the September 2016 issue of The Public Manager, both share some of their thoughts on how leaders and managers can support staff through the upcoming transition. Here’s a preview of the discussion.

There's a new law that for the first time is allocating money and staffing resources to presidential candidates so they can start working on transition efforts early. Already this year we have almost a quarter of agency political appointee positions vacant. Against this backdrop, how do you see these teams working? How is this process coming together? Do you think this new transition framework is going to provide the government with even greater stability?

Janice Lachance: My reaction to the law is that it's about time. Transitions have traditionally functioned in the shadows until the election. I think it’s smart for our government to get that out in the open. To have it be transparent. Let’s have everybody on the same page and committed to the smoothest transition possible.

What was fascinating to me, both as President Clinton was coming into office and then as he was leaving, was that there was a lot of political turmoil, but the transition operated at a very different level. Everyone understands the seriousness of the responsibility that they're taking on—whether they're Democrats or Republicans, the same party or different party. Everybody involved was committed to doing it as well as possible, and I think that is only going to get better with this legislation that pushes the calendar forward. It will help people deal with some very difficult issues that they're not going to have to squeeze into an unrealistic 90-day timeframe.

Linda Springer: It's widely accepted that the 2008 transition was one of the smoothest transfers of power. Both the incoming and outgoing teams were very committed to making that happen. Both teams worked well together because there's so much at stake. Whether it is legislation or good documentation, plans, roadmaps, and techniques, each transition will learn from the others. I fully expect the transfer in 2016 to 2017 to be just as effective.

JL: It's not just the candidates and the campaigns who understand what's at stake. There are an increasing number of organizations that offer good advice. For instance, the American Society for Public Administration and the National Academy for Public Administration are both committed to offering their expertise to incoming campaigns, regardless of the politics or the parties involved. All of these things are important and extremely helpful, and the government and the country are better off for it.

For the full interview, check out the complete article, “Leading Staff Through Change.”

About the Author
Ron Sanders

Ronald Sanders is a vice president with Booz Allen Hamilton, and the firm’s first fellow. In that capacity, Ronald helps the firm’s most strategic clients deal with pressing human capital and organizational transformation challenges. Ronald joined Booz Allen after more than 37 years in federal service. Over the course of his career, he served as the U.S. Intelligence Community’s first chief human capital officer,  U.S. Internal Revenue Service’s first chief human resources officer, and the U.S. Department of Defense’s director of civilian personnel and equal employment opportunity. His most recent book is Tackling Wicked Government Problems: A Practical Guide for Enterprise Leaders.