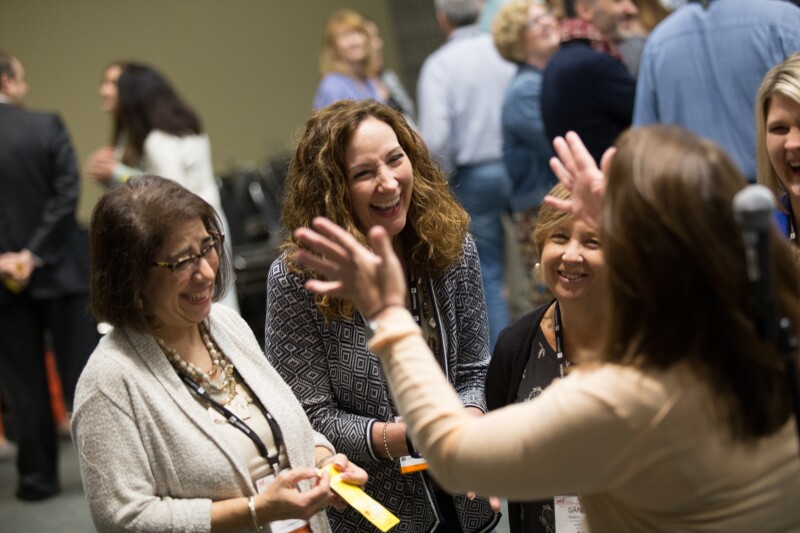 Randi Zuckerberg Shares a Few of Her “Aha” Moments

Randi Zuckerberg’s talents, experience, and skills run the gamut of entrepreneur, investor, bestselling author, speaker, and tech media personality. She also is the mother of two sons, a job she says is her favorite role. As a woman in tech (she founded Zuckerberg Media after noting the lack of women in the industry) as well as the author of Pick Any Three: You Can Have It All (Just Not Every Day), which posits that you can’t do it all every day, Zuckerberg has been a role model and creator of many “aha moments” for others. We asked her about her inspiration and the world of tech for women.

You can’t escape tech in today’s world, whether in your personal life or in your professional work. How can schools, from elementary onward, change a dynamic that has been prevalent across the world that says it’s OK for girls not to be interested or to excel in STEM coursework?

The worrisome statistical lack of women in tech stems from the simple fact that girls are just not exposed to tech as often as boys are. Fourth grade is usually when children decide what they like—which is conveniently just about the time video games, block building, computers, multiplication tables, and other STEM education skills are introduced and encouraged.

Sure, we could point fingers at toy companies’ “pinkening” of girls’ toys or the testosterone-laden, adrenaline-heavy video games marketed toward Y-chromosomes. But I think that the lack of female role models in STEM is what causes girls to fall by the wayside. To ensure girls are not left out of the job place, the tech space, or the innovation race, schools need to—and are definitely starting to—have a STEM-heavy curriculum that’s geared toward all students. Tech is not going away anytime soon, so if any child is left behind in coding and programming education, the results will hurt their progress in years to come.

Can you talk about your aha moment in making it a personal mission, if you will, to encourage women not only to pursue tech careers but also become more acquainted with cutting-edge industry trends such as blockchain, given that—in addition to establishing Zuckerberg Media—you wrote Dot, a character book about a girl who is a technophile?

I spent 10 years in Silicon Valley being one of the only women in the room. One day after another way-too-long meeting with a bunch of men, I realized that I wanted things to be different for the next generation of ladies. When I first started Zuckerberg Media, I wanted to inspire more women to go into tech, to start their own businesses, and to definitely understand enough to have a voice and a seat at the table.

I set out to create a content platform for women in their 20s, 30s, 40s. But like any successful entrepreneur, once you dive into the data and see that your initial hypothesis was wrong, you pivot. All the data was showing me that it’s around ages eight or nine years old that we start losing girls in STEM. If we’re going to have equal representation of women in tech and entrepreneurship, it starts early.

Considering that less than 6 percent of all cryptocurrency is owned by women, we are still vastly underrepresented in the cryptocurrency space as well as in the tech industry. So now virtually all my projects are centered around the third- and fourth-grade girl and how to reach her and keep her excited about STEM, which is exactly how the character Dot came to life.

Mentors are incredibly important in the world of work—maybe more so now with the disruptions and changes we face. Can you tell us about a mentor who made a considerable impact on your life/career?

Arianna Huffington has always been a real mentor to me. She’s “been there and done that” in terms of making a pathway for women by helping others to follow in her same successful path. I’m forever grateful for her mentorship.

And because guidance is crucial to success, I’m now walking the walk and talking the talk with my own mentoring platform, Zuckerberg Institute. At ZI, a team of experts help startups and professionals alike grow their business with mentorship, group intensives, and coaching. I wouldn’t be where I am without mentorship, so this is my way of giving back.

Women, especially, seem to feel they need to be beautiful, brainy, a best friend, and two dozen other things—all at one time. And many continue to believe and, in fact, argue that. You disagree. What was the impetus behind your book Pick Three?

I had my goals set on Broadway and musical theater and was worried I wasn’t Harvard material because of its storied focus on grades and perfection. But after I attended a campus tour of Harvard, the admissions officer told me that perfect grades weren’t the end-all, be-all of acceptance criteria (thank goodness!). Prospective students who were “well-lopsided” in other areas besides academics rounded out Harvard’s elite status. Plus, those with concentrated outside interests kept things interesting in the classroom.

If it weren’t for learning about well-lopsidedness I would’ve never discovered the need for Pick Three. We can’t be well—anything without finding a balance somehow. Pick Three removes the guilt for working moms, dads, and everyone in between. Total balance is a myth. Women are often stuck with the “homemaker” title more so than men, so they end up getting shortchanged if they choose to fall into the work/life balance trap.

What would be your advice to your 21-year-old self?

Don’t be afraid to be an interesting, three-dimensional person with multiple interests. Haters gonna hate, but you’ll love living life to the fullest. Just be you!

Share Your Moment
Do you have a career defining or a-ha moment to share with the field? Please share your story with the field to inspire your peers to discover their next career moment.
Get Started
Related Tags: