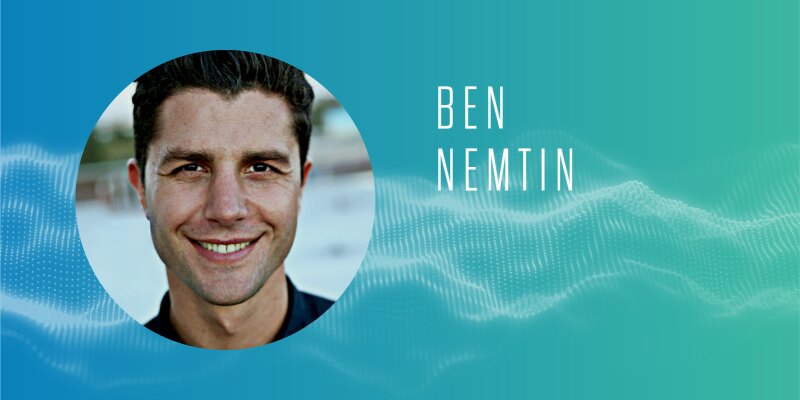 Ripple Effect of Helping Others

Talent development professionals help others. Ben Nemtin, star of The Buried Life, called attention to that in his keynote address closing out the Association for Talent Development’s Virtual Conference: Unleash Potential. And he noted that attendees could likely relate to his bucket list pursuits that entailed not only going after the big things he wanted to do before he died but also involved helping others.

The Roots of The Buried Life

As he began his session “Impossible to Possible,” Nemtin spoke about falling into depression after seemingly being on top of the world as he graduated high school in Victoria, British Columbia, Canada. He had a spot on the national under-19s rugby team and a college scholarship.

But that joy soon turned to anxiety, trouble sleeping, and then depression. He became a shut-in in his family’s home, not understanding why he was feeling the way he was. A summer in a new town, securing a job that brought him confidence, and talking with others about his feelings led Nemtin to start turning the corner. From there, he decided to only surround himself with people who inspired him. He found three individuals who fit that definition: Jonnie, Duncan, and Dave. 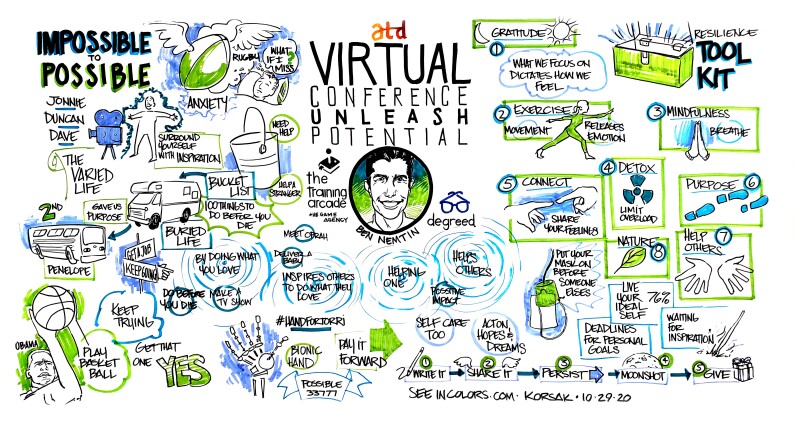 Sketchnotes provided by See In Colors

What followed was their decision to make a film. The quartet were inspired by the Matthew Arnold poem The Buried Life, in which the poet described how we all too often leave our dreams and aspirations buried with day-to-day life getting in the way.

To avoid dying without living their dreams, the young men created a bucket list—the stipulations being that they would act as if they had $10 million in the bank and that the goals had to be crazy big. They also knew they wouldn’t be able to accomplish their goals by themselves. They decided that every time they crossed off an item on their list, they would help a stranger do the same.

The list that Ben and his friends crafted included such things as helping deliver a baby, having a beer with Prince Harry, and playing basketball with President Barack Obama. That last one required all the grit and persistence they could muster, including dealing with a number of rejections before it finally happened.

“Doing what you love actually inspires others to do what they love,” said Nemtin. There’s a ripple effect. The same ripple effect occurs when you help others: They, in turn, have a propensity to help those around them.

To be able to help others, you need to take care of yourself, emphasized Nemtin. Here are some tips to do so, and these comprise what he calls his resiliency tool kit.

Though this belief is hopefully shifting, it’s long been the pervasive mindset that pursuing our personal dreams is selfish. Nemtin refuted that, noting that pursing our dreams is actually a service. Prioritizing your goals, he says, is beneficial to you, your friends and family, your career, and your organization. And if organizations and leaders create an environment that encourages people to go after what they want, those individuals are far more likely to stick around.

Psychologist Tom Gilovich reported in his research “The Ideal Road Not Taken” that 76 percent of people identified on their death beds that their greatest regret was not fulfilling their ideal self. What leads people to stop short of that goal? Nemtin identified two reasons. One is that—unlike work goals and duties—our personal goals have no deadlines. The second is that we often lack the inspiration to move forward. To that, Nemtin suggested that we create our own inspiration through small steps and think of “dreams as projects.”

Here are five steps he outlined to accomplish your personal goals:

Ripple effects happen not only from big things—for example, a smile causes a ripple, as does a compliment—Nemtin pointed out. And we don’t necessarily see those reactions happening, and that includes training and development results. But know that as talent development professionals, said Nemtin, you create a positive difference in others.

CP
About the Author
Connection Point