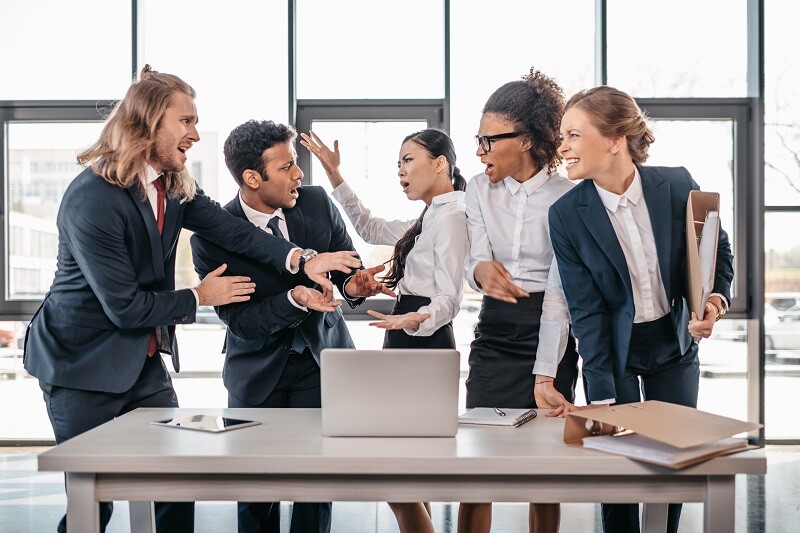 Why Your Team Needs More Conflict, Not Less

You probably have too little conflict on your team. Does that sound strange? Even counterproductive? Most leaders spend a good amount of energy trying to minimize conflict on their teams. But they should actually try to generate conflict.

Before going further, let me be clear that by conflict I do not mean insults, passive aggression, and fistfights. That kind of conflict isn’t useful. What I’m talking about is constructive conflict in the form of productive disagreement—sometimes vehement disagreement.

Conflict of all kinds is something that most of us try to avoid. But it is not an overstatement to say that conflict is an engine of human progress. Humans make sense of the world together by trying different things until we come upon the best solution to whatever problem it is we are trying to solve. This process inevitably—and necessarily—involves conflict.

Conflict, in this sense, is fundamental to how teams work together to solve problems. Optimally, our teams bring a diversity of thought and experience to offer solutions in different ways and with varying perspectives. We then wrestle with these different approaches. We advocate for an approach, we disagree, and we listen and learn. In other words, we engage in challenge and conflict.

Given this reality, it makes no sense for team leaders to eliminate all conflict and disagreement. Rather, leaders should encourage it and create the circumstances where constructive conflict can flourish.

In the many years that I have observed teams, I have noticed that teams that do not engage in challenge and conflict do not achieve the best outcomes. They might produce acceptable outcomes, but often not optimal ones. Lack of challenge and conflict on teams generally points to one of two, or both, dysfunctions—disinterest and fear.

Challenge and conflict can be uncomfortable. When teams engage in unimportant work, or work that the team perceives is unimportant, they will often disengage. At this point then, why would they wish to engage in challenging each other, wasting precious time in their day over issues lacking in meaning? They will usually just nod along and accept whatever direction requires the least effort.

And so, if you want to promote a “challenge culture” on your team, you must ensure that the work the team is engaged in is actually important and that the team recognizes it as such. When people are engaged in work that matters to them, they naturally want to offer their perspectives and advocate for them. In this light, framing important work and actively recruiting people to that work is a critical, and often overlooked, leadership skill.

If leaders want a high-performing team, they must abandon the idea that disagreement is threatening, disrespectful, or diminishing to their position. Leaders must embrace the idea that they do not have all the answers and may not be the smartest person in the room. The reason you have a team, optimally, is precisely because you don’t have all the answers. When teams work well, disagreements, challenges, and conflicts spur innovation and ideas that cannot be anticipated. There is magic in this. When leaders shut down disagreement, they shut down the very purpose of the team.

It is important that leaders purposefully build conflict into how their teams work. Here are a couple of things that leaders can do right away to begin generating a challenge culture that uses conflict to get the best outcomes:

When people offer different opinions or push back, get curious. Anytime someone disagrees, your single response should be, “Tell me more.” “Tell me more” demonstrates your curiosity about their perspective and that you value their opinion enough to consider it. Don’t listen with an intent to rebut. Understand that a team member may have a different perspective that can help the team solve its important work. Make “tell me more” a team norm that everyone follows in the face of disagreement.

Don’t shy away from encouraging conflict and challenge on teams. Conflict is the crucible where workable ideas are forged. After all, if the problem is easily solved, then you probably wouldn’t need a team to solve it. Actively work to generate challenge and conflict on your teams and reap the benefits of better engagement and results.

About the Author
Thane Bellomo

Thane Bellomo is an organizational development innovator, author, and speaker who has spent more than 20 years working with Fortune 500 organizations and leaders in manufacturing, healthcare, government, and the energy industry.

He has published numerous articles and podcasts exploring how leaders, people, and organizations most effectively form and function. His new book, Teamwork in Talent Development, is available now.

2 Comments
Sign In to Post a Comment
Sign In
MO
Michael O'Connor
August 05, 2022 11:03 AM
Yes, AND... Fully exploring an idea is very useful AND the vehicle to do so is very important. The above would be more enticing to people who prefer Thinking (Myers-Briggs), but people that prefer Feeling will probably be less likely to jump into the fray. Dr. Edward de Bono's Six Thinking Hats gives a simple model for exploring ideas in parallel instead of using argument. Here is a link to a 3 minute explanation by Dr. de Bono https://www.youtube.com/watch?v=o3ew6h5nHcc
Sorry! Something went wrong on our end. Please try again later.

sean Glaze
August 04, 2022 05:24 PM
Completely agree with this idea, Thane!
Teams that LACK conflict are never high-performing, and get comfortable being nice... they accept poor results because they are not willing to clarify or enforce standards.
HEALTHY TEAM CONFLICT is a symptom of connection, commitment, and courage.
It is the leadership job to create a culture where curiosity and disagreement is encouraged.