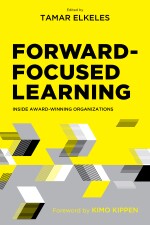 Inside Award-Winning Organizations
By Tamar Elkeles
Bookmark
Share
Sample Chapter
Pricing
Save when you buy in bulk.

Shape What’s Next for Learning in Your Organization

Our era of dynamic change and its profound impact on personal lives and businesses throughout the world represents a new normal. How organizations learn will determine whether they rise to the occasion and adapt or struggle behind outdated practices and processes.

New or aspiring talent development executives can learn a lot from the best of the best—the high-performing, award-winning companies responding to increased pressure to deliver business value. Forward-Focused Learning features organizations that are proactive about looking for ways to grow, build, and learn. They offer lessons for being the most innovative, the most aligned to business needs, and the most strategic. Peek behind the curtain and see how other companies use learning to develop their employees and their businesses.

Rich in examples of what’s worked, this book is a must-read for anyone setting learning strategy or managing the learning function. Organized around themes of vision, people, and process, it covers how to:

• Apply a systems mindset to the learning organization

• Build a learning team capable of serving the business

• Do more with the resources you have

Written by talent development practitioners and consultants at the top of the field, from brand-name companies such as Comcast, Hewlett-Packard, Nike, General Mills, Ford, GE, and Booz Allen Hamilton, this book is your key to gaining a seat at the table.