$156 Billion Spent on Training and Development

Findings reported in ASTD’s 2012 State of the Industry Report.

U.S. organizations spent $156.2 billion on employee learning and development in 2011, according to the just-released findings of ASTD’s 2012 State of the Industry Report sponsored by Skillsoft and Eagle’s Flight.

The report’s findings demonstrate that despite continuing economic challenges, senior executives understand that a highly skilled workforce is a strategic differentiator and they are making substantial investments in the development of their employees. 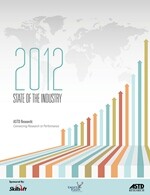 • $156.2 billion spent on learning and development in 2011 in the US
• 56 percent of expenditures were on internal expenses ($87.5 billion)
• Per-employee spending decreased 4 percent ($1,228 in 2010, $1,182 in 2011), but the amount of spending on employees correlates to company size. Smaller companies typically spend more per employee on L&D than their larger counterparts.
• 14 percent of expenditures went to tuition reimbursement ($21.9 billion)
• Direct expenditure on learning as a percent of payroll increased from 2.7 to 3.2 percent.
• Employees averaged 31 hours of training in 2011. Employees in BEST organizations used substantially higher amounts of training, averaging 49 hours each.
• Technology-based delivery of instruction rose to 37.3 percent of formal hours, up from 29.1 percent in 2010.
• The top three areas of L&D content in 2011 were: managerial and supervisory (12.6 percent); profession- or industry-specific (11.6 percent); and processes, procedures, and business practices (11.6 percent).

The ASTD 2012 State of the Industry Report is available on the ASTD Store.