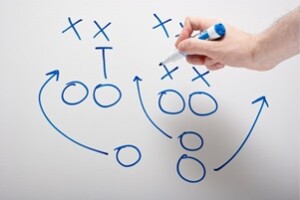 The NFL draft is a big deal for many sports fan (myself included). During the first round of picks, fans anxiously sat, waited, watched, cheered, and jeered as our favorite teams—and our rivals—selected the future of their franchise. Of course, as I waited and watched the countdown to the next selection, my mind wandered. I began to make connections that I know I’m not the first to make – connections between sports and business. I started to compare what I was watching play out live on TV with the reality I face in my role as the leader of the talent function in my organization.

What I see is an opportunity for the business world to learn from the sports world. I believe there are five game-changing talent lessons we can learn from the NFL Draft.

To make a smart draft pick, the coaching staff and team leaders study (and I mean really study) their current roster. Where are the biggest current or future gaps? Is a quarterback nearing the end of his career? Did your star running back suffer an injury? How many interceptions did your second-string defensive back have this season compared to the last two seasons? Player by player, starters to practice squad, the coaching staff is continually evaluating the team’s talent.

Before deciding who to draft, the coaching staff have a deep understanding of their current players. They must be fully aware of the team’s strengths and known areas of deficiency. Take the New England Patriots, for example. They have many of their returning players from last year and made some strategic additions to the team that add strength, but didn’t need to fill any gaping holes. On the other hand, the Miami Dolphins were wise in their selection of Isaac Asiata to help fill a gap in its guard positions. Did the coaching staff just make these decisions on a whim? No, these decisions were the type of strategic choices that come only when you have a clear grasp on individual player and team strengths and weaknesses.

In the business world, how well do we know our organization’s strengths and weaknesses? How often are we reviewing our player performance? If you’re still on a traditional performance management cycle, it’s once (or maybe twice) per year. Shifting to a continuous performance management process, which provides coaching based on recent performance and evaluates your players in real-time, enables your coaching staff to easily communicate talent gaps before they become an emergency. Is a position about to open because performance is lackluster in an area? Do you need to add a utility player? Add some strength? Build for the future depth?  By constantly having a pulse on how your players are performing, you can be strategic in your recruitment efforts.

While watching the draft, it’s easy to become overwhelmed by the amount of data and statistics cited on each player. The sheer volume of data collected and analyzed continues to grow, and the comparison data available at the click of a few buttons deepens the conversation. How does this draft pick compare to all other players before him? What were the statistics of the games he played in college? How did he perform in player evaluations?

What kind of data does your organization keep on your talent? The move to big data is all around us—except, it seems, in the area of human resources and human performance. What kind of metrics could we be keeping that we are not? Efficiency metrics, on-time metrics, percent of projects over budget, email-reply speed (okay, that may be a stretch)? But it goes to show you that any number of data points might help give some insight to your current roster.

What about talent you’re scouting? What kind of predictive assessments can you provide to evaluate potential job fit? What pre-tests or data indicators might you be able to derive from a candidate to help avoid making decisions based solely on the performance of a one-time event (interview) and piece of paper (resume)?

Organizations can begin to harness big data, which is often reserved for consumer-facing efforts, for use in internal efforts. The data provided on individual performance could assist in hiring and firing decisions, promotion and bonus determination and learning needs—all using facts to supplement the opinions of leaders.

In addition to getting to know their own players, good sports teams really understand their competition and determine what the key difference-making positions are, or will be, in their own organization. Coaches determine where to invest in their team to best capitalize on the weakness of their competitor.

In your organization, can you easily identify the few, key positions that will propel you into the future? Do you have the talent you need to fill, and keep filled, in those key roles? Where is your competitor gaining on you, or currently beating you? How can you be better prepared to defend against that threat? What few positions, if left vacant, could cripple your organization? Do you have a strong bench of talent to backfill that role today? Tomorrow? Three years from now?

Gaining consensus among your head coaches on the key difference-making positions and having a succession plan (or hiring strategy) in place for those roles helps sets you up for the greatest chances of winning the championship. By placing a high priority on the key differentiation positions, you can get budget to invest in the training of successors or for sourcing talent for these roles. Of course, you shouldn’t ignore the other roles, but rather focus a lot of energy and attention on the difference makers for your team.

#4: Give Serious Consideration to Player Behavior

While the data may point you in the direction of drafting a specific player, good coaches agree there is still a need for ensuring “player fit.” Even with all the skills in the world, when a player doesn’t have the right attitude, isn’t coachable, doesn’t mesh well with the team, or has off-field antics that keep him from playing (substance violations, arrests, and so forth), you’re not going to get the results you are after.

Don’t underestimate the importance of a good fit. The culture of the Arizona Cardinals is different from that of the Dallas Cowboys, and players who did well in one club may fail in another. It’s not rare to see a player who was unheard of turn into a superstar simply due to a better fit with the coach, staff, and teammates.

Does your organization have clearly defined cultural norms (think of these as the “price of entry”) that help you evaluate whether candidates will be a good potential fit in the organization? Is the candidate coachable? Does their work style compliment the team, or is it a stark contrast? How well do you introduce your culture to your candidates? How do you integrate your new draft picks into your existing team’s culture? How quickly do you identify cultural misfits and have an exit strategy to “trade” that player to a different team where he or she can thrive?

After the first pick of the draft, the backup plans start falling into place. Each team has 10 minutes to re-evaluate the list of available players and determine who their next selection will be. When the teams ahead of them make their selection, another available candidate has been removed from their list. But, the best coaching staff is ready with a backup player who, while not their first choice, still helps them achieve a strategic goal.

When you have a candidate that you have selected and made an offer to, what happens to all the other candidates? Do you have a strong second choice? Do you stop interviewing when you find the dream candidate?

What happens when that dream candidate declines your offer? Often, I see organizations start back at square one—posting the open role and waiting for more applications to trickle in to start the hiring process over again. Having a solid backup plan in place when recruiting a candidate is key to filling that open position in the shortest amount of time. Don’t stop evaluating potential players just because you have a first choice. Create a talent pool to keep contact with interesting candidates who may be a future fit for your organization, even if now is not the right time. And, remember to always be recruiting.

Now that the draft is complete, we’ll start to get an idea of what the new players bring to their team when the first of the organized team activities and minicamps begin. Which, brings me to another topic for another day—onboarding your new team members!

About the Author
Angel Green

Angel Green is a learner advocate who is passionate about driving business results through innovative solutions in organizational design, performance management, and learning programs. With nearly 20 years’ experience in the learning industry, she has led the creation of numerous award-winning programs, each dedicated to improving employee performance. Angel is dedicated to sharing her knowledge and experience on the benefits of empathetic design, introducing tools and techniques that designers can use to help create learner-centered instructional products. She is the co-author of the Leaving ADDIE for SAM Field Guide and has written and spoken extensively within the Learning and Development industry.