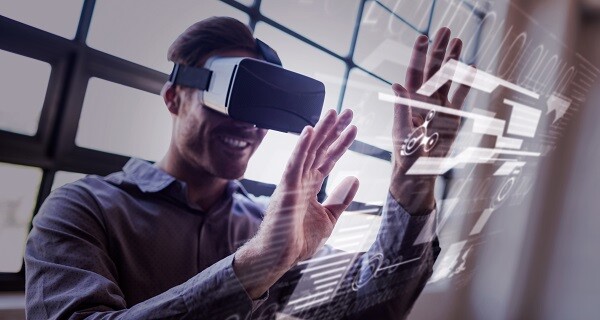 By now you’ve probably heard about the recent emergence of consumer-ready virtual reality (VR) technology. Strap on the headset, grab the hand controllers, and experience the magic of going to another world.

While game developers are leading the way in exploring VR’s potential, many learning designers see virtual reality as a revolutionary tool for accelerating skill acquisition. For instance, VR can be used like a flight simulator for any technical task that’s too dangerous, expensive, or inconvenient to practice in real life. VR also is hailed as the “ultimate empathy machine” for any soft skill training.

In a few years’ time, VR’s cousin augmented reality promises to transform performance support by overlaying visuals and other information over the real world. But several learning leaders are still taking a wait-and-see approach to these new mixed reality technologies. Here are five reasons why that might be a dire mistake.

Study after study have demonstrated the efficacy of virtual reality learning. Here are just a few examples:

#2. VR Mass-Market Is Right Around the Corner

VR is here. But it’s still a niche market. That will change soon, really soon. Once Apple launches its mixed reality device (planned for the next year or two), we could have 100+ million mixed reality devices almost overnight. Google’s Android also is rapidly adding both virtual and augmented reality capabilities, and Microsoft is betting its future on the HoloLens and Facebook on the Oculus Rift.

Are you ready to bet against these digital media titans? The forces of Moore’s Law on steroids will make this technology cheaper, better, and more ubiquitous in the next years. What are you going to tell your CEO when he asks about your training content for his new iGlasses?

The cost of developing in 3D has dropped dramatically in the last few years. In addition, you can leverage the cost of developing for VR by deploying the same simulation to any flat-screen device. The Unity game engine that powers most VR experiences is cross platform. At my firm, the Gronstedt Group, we’re already developing the same simulations for VR headset, desktops, tablets, and phones, with minimal additional effort.

#4. Develop Today and Deploy on Any Future VR or AR Headset

The VR headset in your office will soon be obsolete, but the learning experiences you develop for them will not. Unity is destined to be the “lingua franca” of mixed reality development for any new headsets in the foreseeable future. When a new headset comes along, you can reuse existing learning assets.

#5. Take Advantage of the Novelty Factor

Most of your employees still haven’t experienced high-end virtual reality, which provides room-scale positional tracking so you can physically walk around and specialized hand-held controllers for realistic interaction. It's a mind-blowing experience for first time users. You have a six- to12-month window to astonish them with the first virtual reality experience of their lives.

The VR revolution has arrived and it’s ushering in a new era of experiential and visceral learning. This is not the time to be on the sideline. Start development now for the high-end VR headsets, Oculus Rift, or HTC Vive. Make them available in your training centers and lunch rooms, at events, or with traveling roadshows. By the time Tim Cook has unveiled the iGlasses, you will have a library of VR programs and be far long the learning curve of developing mixed reality simulations.

About the Author
Anders Gronstedt

Anders Gronstedt, PhD, is president of Gronstedt Group, which helps global companies such as GE, United Healthcare, Deloitte, Microsoft, Kimberly-Clark, and Jamba Juice, and government clients such as the city of New York, improve performance with innovative learning approaches. These include next-generation digital simulations, gaming, and immersive 3D virtual worlds. His articles have appeared in the Harvard Business Review and he hosts a weekly speaking series.