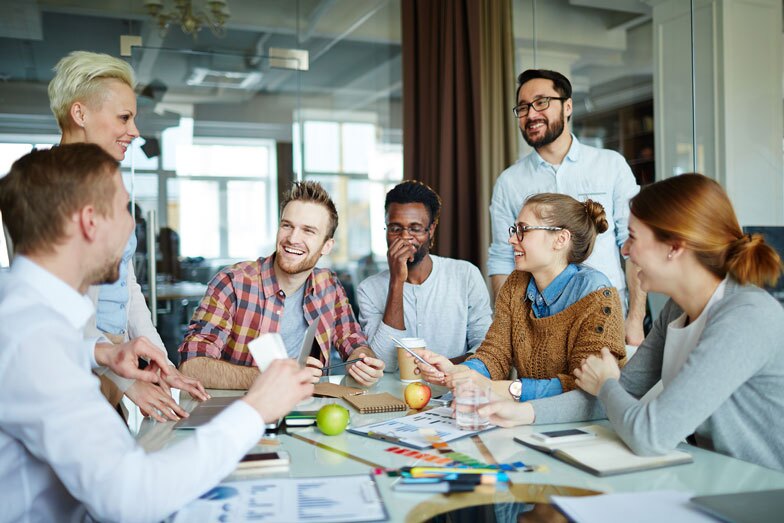 5 Steps for Building Trust in the Workplace

Trust is the foundation for building strong teams, creating a positive work culture, and producing results. The cost of not having trust in the workplace or a culture of trust is also greater than you may be aware of. Fast Company shared a story about a Fortune 500 company who realized it took an average of 89 weeks to execute change within their company, and 39 of those weeks were a direct result of mistrust.

Have you ever worked in an environment where trust didn’t exist? You most likely experienced a workplace where people were unreliable, inadequate, disloyal, uncommunicative, and inconsistent in their work and their moods. It’s what I call a low-trust workplace, and it can create a highly stressful and undesirable environment for everyone. However, when trust is present, people start to take ownership of their responsibilities, help one another out, speak highly of one another, communicate more often, and tend to be more productive. Trust provides a safe place for people to share their struggles and dreams and reach their potential individually and as a team. So how can you, as the leader, build a high-trust workplace? In this post I’ll share the five elements of trust so you can raise the morale of your team.

First, let me share with you a couple of statistics you should know about trust within organizations. According to the new Edelman "Trust Barometer" (a survey of 33,000 people in 28 countries), one in three people don’t trust their employer. They also discovered that trust decreases from top positions to the lowest. For instance, 64 percent of executives trust their organizations, while only 51 percent of managers and 48 percent of other staff stated they trust their organizations. Employees remarked that they trust their peers more than the CEO and upper-level executives of their company. That means the higher up you go, the more critical it is for you to build trust with those beneath you. Building trust starts with leaders.

5 Questions That Determine If You’re a Trustworthy Leader

1. Do people constantly question your expectations of them?

2. Would most people describe you as someone who is reliable?

3. Is there a high amount of gossip and disrespect among your team?

4. Do the majority of team members underperform at the tasks you ask them to do?

5. Do you trust people to take on new responsibilities?

If the answer questions one, three, and four are yes, and two and five are no, there is work to be done. Start improving by learning these five elements of trust.

The 5 Elements of TRUST

Be transparent (T) with your team. Transparency is showing accountability through communication. Being honest, being vulnerable, giving feedback, and stating expectations are all forms of transparency. Without transparency, people tend to make up their own truth about something. For instance, if you don’t give feedback after they’ve made a mistake, they believe it’s OK to repeat that same mistake again. If you neglect to say, “good job,” they think you didn’t like the results they provided.

Be transparent by giving constructive criticism and positive feedback often, so people understand where you’re coming from and what your expectations are. You can also be transparent by admitting mistakes and being vulnerable with others. This shows that you’re not perfect either, and it’s a great way to show people that they can trust you. By being an example for your team, they will learn to be more transparent with you and one another.

Respect (R) everyone. Respect your employee’s time, their opinions, and their ideas. If you say your meeting is at 9 a.m., don’t show up at 9:15. If you say you have an open-door policy, don’t shut the door just because you don’t agree with someone’s perception. Remember, great leaders are great listeners. Showing respect doesn’t mean you have to agree with everyone, but when you honor their feelings, it builds trust, and they feel safe to open up more often. Respect is simply the Golden Rule in action: “Do unto others as you would have them do unto you.”

Unite (U) your team. The first step here is to let people know that you will not tolerate cliques and gossip amongst your team. Gossip is like cancer; it kills team morale. Trust, however, is the cure. The second step is to have them work toward one vision. Give them a group project they have to complete by working together. If they fail, they all reap the consequences, and if they succeed, they all receive the reward. The team that struggles together and succeeds together is a team that unites.

Show (S) them you care. As leadership expert John C. Maxwell said, “People don’t care how much you know until they know how much you care.” Trust is built when someone sees that you truly value them as a person and not just as an employee. In my audiobook, The TRIUMPH Method, I walk you through the top five things employees need to have job satisfaction—being valued is number 1 on that list. You can show people you value them by learning more about them personally, praising them daily, and asking for their input more often. When people feel valued, you do more than earn their trust…you earn their loyalty as well.

Trust-Building Activities (T) build morale. It’s been proven that when someone enjoys the people they work with, they’re happier and are more productive—and that doesn’t happen by accident. One of the ways to raise morale and build trust at the same time is to provide activities focused on building trust in teams. When I conducted a training for Princess Cruises, I included a few trust exercises. One was the “Index Card Game,” in which everyone had to write down something positive they thought their fellow employees brought to the team. When we finished, each team member walked away with an index card full of compliments they never knew their co-workers thought about them. The team said that one activity brought them closer than they’ve ever been.

When comparing a high-trust to a low-trust work environment, the five elements of TRUST will either be present or missing from the leader. My challenge to you is to make an effort every day on building one of the five elements of TRUST. Today, work on being transparent; tomorrow, work on showing others respect, and so on. Keep going until you’ve built a high-trust work environment and more respect in the workplace.

Check out similar articles: Mutual Respect Is the Foundation for Your Team’s Extreme Performance

This post was originally published in May 2018 and was updated with recent research and resources.

About the Author
Betsy Allen Manning

Betsy Allen Manning is recognized as one of the top leadership speakers, a best-selling author, and a personality expert. Betsy mastered the art of human behavior while working as a manager for multi-billion-dollar corporations such as Disney, the Golden Globe Events, and Wynn Hotels. Betsy provides managers with communication strategies to reduce workplace conflict, increase team productivity, and expand bottom-line results. Her strategies cover the three areas most integral for leaders to produce top results for their organization: high-level communication, increased influence, and high-performing habits. Typical clients experience a 78 percent reduction in workplace stress and at least a 27 percent increase in productivity. Betsy has used these techniques to train managers for Toshiba, TSA, and the U.S. Department of Defense. Her keynote speeches, leadership development programs, and cutting-edge communication techniques have helped her develop positive cultures in organizations nationwide, and have played a huge role in how she became one of the most in-demand trainers on DiSC Personality Styles and a top John Maxwell certified coach in Dallas.