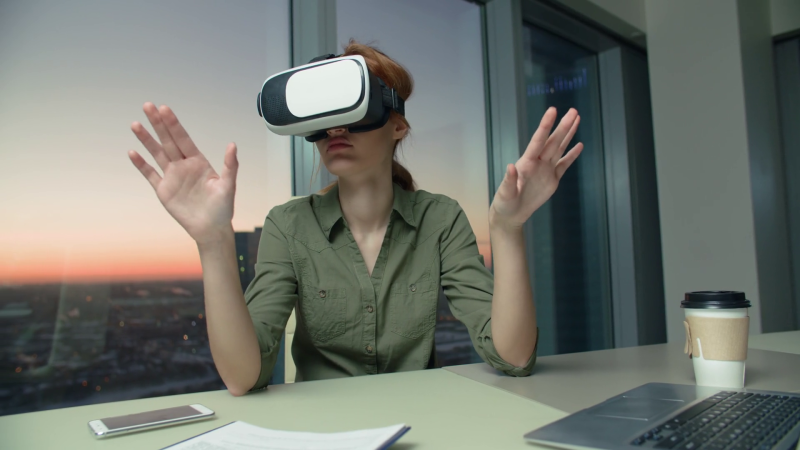 AR and VR Have a Bright Future in E-Learning

Both augmented and virtual reality (AR and VR) have made significant strides toward becoming popular consumer technologies over the last few years. As the technology continues to develop and become more accessible, we are beginning to see more ways that VR and AR can have an impact on different industries.

While entertainment may still be the primary use of most AR and VR applications, there is great potential for both within the e-learning industry. According to a report from Zion Market Research, the global VR market was valued at $2.2 billion in 2016 and is expected to grow to $26.89 billion by the year 2022.

Education may only be one sector of the global VR and AR markets, but a report from Goldman Sachs is predicting major growth. E-learning is expanding quickly, thanks to technological advancements. Improvements in voice recognition apps make it easier to learn remotely, and AR and VR are forecasted to go a long way, too. The 2016 report predicts $300 million in revenue for VR/AR educational software in 2020, and that figure is expected to grow to $700 million by 2025.

AR and VR have yet to reach their full potential in e-learning, but there is good reason to expect that it will not be long before they do. Here are four reasons why AR and VR are expected to have a significant impact in the e-learning industry.

Although these technologies have not made their mark on the e-learning industry thus far, the continued growth of the global markets for AR and VR is a promising sign. Additionally, the increasing investment in AR and VR indicate significant potential for future growth. Global investment in VR tech reached a record high of $3 billion in 2017, which is almost three times higher than that of 2015.


The Cost Is Coming Down

This is probably one of the most significant factors concerning the adoption of AR and VR for education. Until recently, the price of getting started with the technology was too great for most organizations to take on.
Advertisement

As the cost of hardware and software decreases, the technology is going to become more accessible for businesses and consumers alike. We are even starting to see developers leveraging existing tech like smartphones to deliver more affordable, widespread options for using AR and VR.

For most companies, now is not the right time to go all-in on VR and AR. It is, however, a good time to start testing the waters.
Advertisement

With inexpensive options that work with smartphones, businesses can start working on test projects to see how they can integrate VR and AR into their learning and training programs. With affordable hardware and software options, companies should start developing and testing plans for a future in which they are ready to widely adopt AR and VR.

Engagement can be one of the weakest aspects in many e-learning platforms. If the learners are not committed or interested, the program will struggle to deliver the best outcome. With AR and VR, you have technologies that have been shown to increase engagement and improve results. There are even some early studies that demonstrate some of the additional benefits these technologies have for education.

The introduction of AR and VR technologies is relatively new to e-learning, and they have some way to go before we can expect widespread adoption. However, all of the current trends indicate an increasing role for both in education. For companies that see AR and VR as a part of the future for learning and training, it’s smart to start experimenting now.

About the Author
Rae Steinbach

Rae Steinbach is a graduate of Tufts University with a combined international relations and Chinese degree. After spending time living and working abroad in China, she returned to NYC to pursue her career and continue curating quality content. Rae is passionate about travel, food, and writing, of course.

Drake Frost
November 30, 2018 10:36 AM
I think these technologies will be useful not only in e-education but also in "classical" education. Especially virtual reality technology. Now I and many other people using this technology as entertainment. I like to play VR games and often play in the center of virtual reality - https://virivr.com.au/. But future development of technologies will allow creating and reproducing a more detailed virtual world. This will allow using virtual reality for the demonstration of various physical and chem
Sorry! Something went wrong on our end. Please try again later.