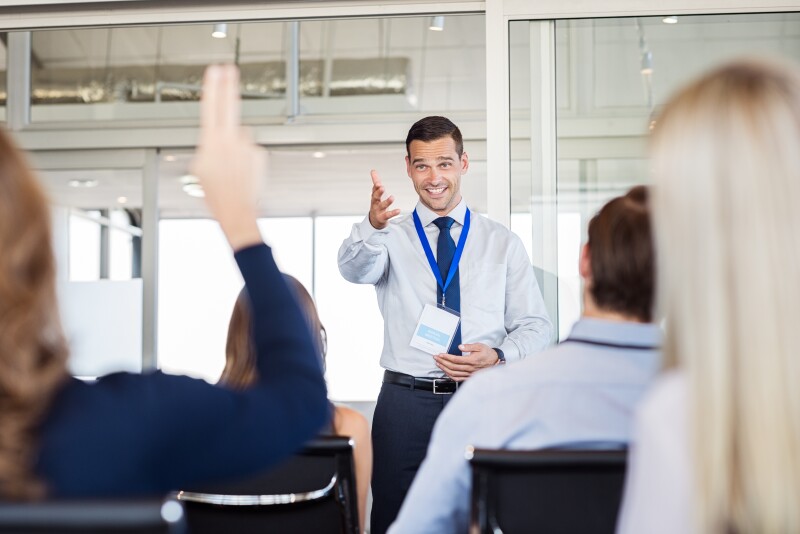 In the late 1890s, Russian physiologist Ivan Pavlov discovered that ringing a bell each time a dog was fed caused the animal to salivate when the bell was rung, even without the presence of food. Consider this scenario and choose what you think is the correct response to the question below.

This happened because the combination of bell and food:

A. Surprised the dog, causing it to remember food when the bell rang.
B. Created an automatic, conditioned response that triggered salivation.

Do you have your answer in mind? Here’s how behavioral scientists, led by B.F. Skinner and colleagues, interpreted Pavlov’s experiment during the first half of the 20th century:

This interpretation—answer B in my opening question—gave Skinner his basis for behavioral learning design: teach people by conditioning them. I can tell you from personal experience, having learned geometry on a 1960s “teaching machine,” that conditioning works. But it’s a soul-crushing bore.

Many of us were taught Skinner’s interpretation, unaware that by the ‘80s, cognitive scientists and neuropsychologists were developing a more comprehensive picture of how learning happens. Modern research suggests that our minds are more than reflexive machines. We’re conscious. We have free will. We pay attention (or not). Living in an environment with many stimuli, we sort through experiences and focus on things that surprise or engage us—in other words, things that are “salient.” Like Pavlov’s dogs, the more attention we pay to something, the more likely we are to file it—and its associations—in long-term memory.

This understanding—a more sophisticated expression of answer A above—reveals teaching methods that use salience to promote remembering.

Because people remember information couched in narrative, you can use story to bring your learning to life. Start with a case study with an interesting outcome then trigger salience by adding human interest. Consider this clear but lifeless training text:

You still awake? Let’s drop the passive tone then add story and human interest to make this more salient.

Now learners are more likely to remember how to avoid a similar fate with their own clients.

You can generate memorable aha moments if you understand their rhythm. They begin with an impasse, often caused by a question that seems difficult to answer (Archimedes contemplating density and volume while taking a bath). They fire off with a moment of insight (Archimedes shouting “Eureka!”). And they end with a rush of delight (Archimedes joyously running down the street naked).

How may you trigger this? If, in your material, you spot an issue that seems difficult but actually has a clear answer, describe it using the aha rhythm. Pose the problem as something difficult or historically puzzling, invite learners to struggle with it for a moment, and pop the answer with a delightful sentence or diagram.

One of my favorite techniques is to open with a question whose answer learners are likely to get wrong. Some facilitators will resist, believing that this is a bad idea. But in study after study, this salience-building method has been shown to boost remembering.

Comb through your next instructional topic, looking for an idea that is both counter-intuitive and important. You want both attributes; the result will be weaker if you ask about something true but unsurprising. You’re looking for salience!

Here’s an example. When I was writing learning for IBM’s Watson Artificial Intelligence employees, most people did not understand Watson’s abilities. I tried several ways to explain them, but everything I wrote was technical and dull—the sort of thing learners skim and forget. Then I tried opening with this question:

In 2011, when Watson beat legendary champions on the quiz show Jeopardy!, IBM engineers said that Watson had the intelligence of:

A. A genius
B. A college student
C. A three-year-old

It turned out that C was the correct answer, which astonished our learners. Salience hooked their curiosity, motivating them to closely read and remember the associated material.

Want to re-examine Pavlov’s findings through a cognitive lens? Try American Psychologist’s path-breaking article, "Pavlovian Conditioning: It's Not What You Think It Is.” For more about asking questions that learners can’t answer, read Scientific American Mind’s "The Pluses of Getting It Wrong."

You’ve noticed that I used salience techniques in this blog post (and a touch of mastery modeling). As for aha effect, please comment below whether today’s post gave you one. Then come back in two weeks to discover when to use Zen-minimal text on slides or screens—and when not to!

About the Author
Douglas Lieberman

Douglas Lieberman offers short-term consulting and targeted problem solving for difficult challenges in skill building and behavior change. For more than a decade he was a member of IBM’s Center for Advanced Learning, where he led the award-winning, patent pending Adaptive Learner approach to innovative thinking, and he created the instructional standards for IBM Watson employees’ required online training in artificial intelligence. Now he works with IBM’s P-Tech initiative, bringing technical training to underserved populations around the world.

Michelle Fetherston
October 16, 2019 09:33 AM
Thank you for sharing--this article piqued my interest because salience was a component of my research in grad school. Happy to share that the article gave me an idea to use in a training session later this week. Thanks!
Sorry! Something went wrong on our end. Please try again later.