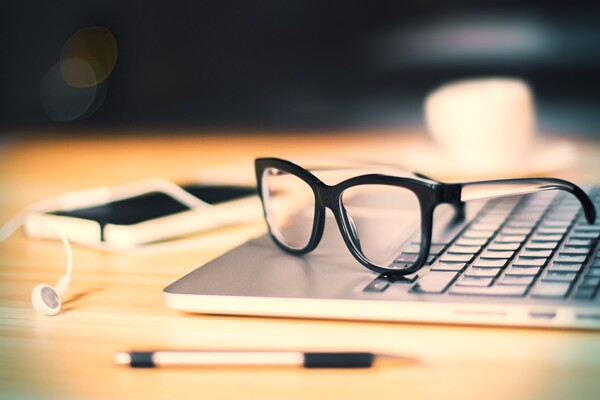 Can Computers Do Human?

How important are social interactions anymore? You can do your banking through an app on your smartphone. You can check yourself in at the doctor’s office and pay your copay with a tablet. At work, you can use a collaboration tool to comment on a coworker’s first draft of a document. Technology has replaced the jobs of people who would normally perform these functions for you.

According to David Deming, professor at the Harvard Graduate School of Education and a research fellow at the National Bureau of Economic Research, social skills, or “soft” skills, are absolutely needed and may be a critical factor in our worth on the job. Now more than ever.

In my last few posts, I’ve discussed how work is changing. Automation and technology have taken over aspects of many jobs. Jobs themselves are changing. Some jobs are being transformed, some are being eliminated, and others are being created. These changes are happening throughout the job spectrum, in low-, intermediate-, and high-skilled jobs.

It’s critical that we understand these changes so leaders know how to support the shifting talent needs of their organizations. A brief look at recent research headlines show that computer technology is increasingly able to perform complex cognitive tasks and can do them quicker (no need for sleep, food, or vacations) and with fewer mistakes and human biases.

Many jobs once done by people are now being done by computers or by people with computers. Self-checkout at grocery stores. Online reservations. Automated customer service and account management. For example, the Memorial Sloan-Kettering Cancer Center uses complex algorithms (machine learning) to review patient records to come up with treatment plans with the highest probability of success.

As you can see, computers can now do the work of both less skilled and highly skilled workers. The commonality is that jobs moving to automation rely on the explicit knowledge of people, which can be more easily written down and made into a routine process.

But it’s harder to automate tacit knowledge—knowledge that's difficult to write down or hand off to another person because it contains a lot of “It depends on . . . and . . . .” Tacit knowledge represents the complex relationships and reasoning used to make complex decisions. Understanding people is also difficult to automate, says Deming, because it requires the ability to read others’ mental states. This is one the primary reasons why knowledge capture efforts haven’t worked too well in organizations.

And yet social intelligence tasks, such as negotiation and cooperation, are quite critical to many work outcomes, explain Carl Benedikt Frey and Michael A. Osborne from Oxford University. They analyzed which jobs are likely to be computerized by determining whether the job required complex perception, creativity, and social intelligence. Through their research, they ranked 702 jobs by likelihood of computerization based on these factors.

The top 5 jobs least likely to be automated are:

The top 5 jobs most likely to be automated are:

These jobs can be done as easily or better by computers, and require less creative communication.

What about jobs in the HR and training fields? Here is where the following jobs rank:

At the time of their analysis in 2013, Frey and Osborne felt that nearly half of the 702 jobs were at risk of future computerization. Whereas before only manufacturing and more routine and manual types of jobs could be computerized, now computers are being programmed to handle jobs of perception (such as driving a car) and non-routine tasks (such as conducting medical and legal analysis).

To explain some of these findings, it is helpful to understand Deming’s research, which shows a valuable pattern. Since 1980, employment share and wage growth has been much stronger in occupations that require high cognitive (math) and social skills, also known as knowledge work (Figures 1 and 2). He also shows that cognitive skills alone have been insufficient for higher wage jobs. 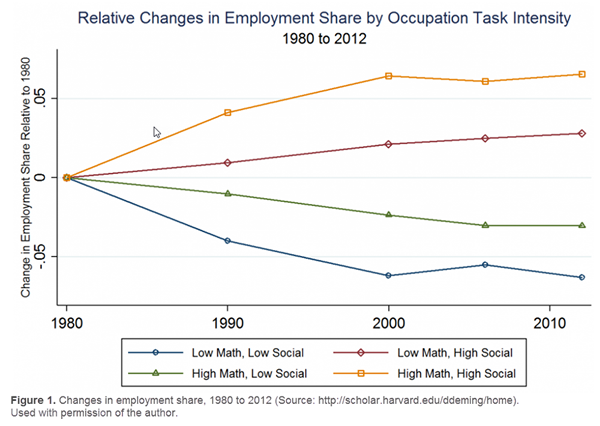 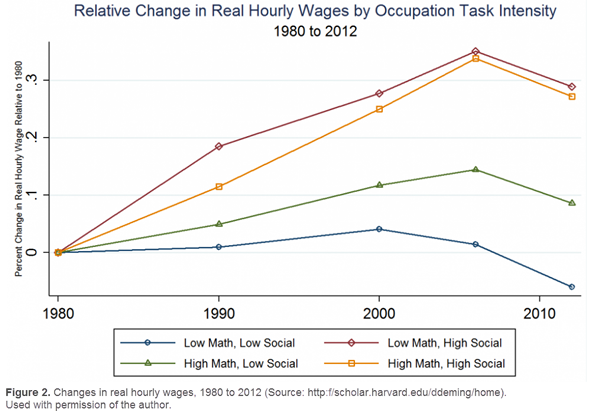 Current knowledge work is complex (I discussed this in previous articles), and skill stability is low, which means that people in these jobs are continually needing to learn new skills. This is expected to continue.

Here is why Deming finds the need for social skills. Better social skills allow workers to specialize (thus they don’t need to know everything in their fields) and exchange knowledge and work with others on their team to perform more efficiently. He calls this “horizontal specialization” and discusses the work and productivity efficiencies gained when people with these types of jobs are able to communicate and collaborate effectively. In other words, good social skills reduce coordination and work costs. Although companies may think knowledge workers need to have very broad and deep skills, the reality is that there is too much to know and knowledge is always increasing and changing.

High-paying, difficult-to-automate jobs increasingly require both cognitive and social skills, and nearly all job growth since 1980 has been in occupations that require both skills. On the other hand, jobs that don’t require these skills have not fared well and many are undergoing automation. Why? Because they can be automated. Humans will continue to have a unique advantage over machines in jobs that require teamwork, flexibility, and coordination.

Frey, C.B., and M. Osborne. 2013 “The Future of Employment: How Susceptible Are Jobs to Computerisation.” OMS Working Papers, September.