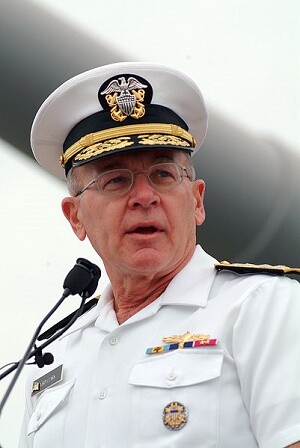 A “connection culture” exists when a leader communicates an inspiring vision, values people, and gives them a voice. One leader in government and the military who intentionally developed a connection culture is Admiral Vern Clark, the chief of naval operations (CNO) from 2000 until his retirement in 2005.

The CNO is the head of the U.S. Navy and the principal naval adviser to the U.S. President on the conduct of war. When Admiral Clark assumed the CNO role, the navy was not meeting its sailor retention goals, which is problematic when you consider the navy’s sophisticated surveillance, navigation, and weapons systems, and the importance of maintaining the readiness of national defense. Concerned about how this would affect military preparedness, Admiral Clark made winning the war for talent his number one priority.

Admiral Clark increased vision by reminding sailors that the navy’s mission is to take the war fighting readiness of the United States to any corner of the world at a moment’s notice. He said that it was time to build a modern navy that would be “strategically and operationally agile, technologically and organizationally innovative, networked at every level, highly joint [with the other services], and effectively integrated with allies.”

Admiral Clark would tell sailors: What we do matters. What we do is hard work. We intentionally put ourselves in harm’s way. We are away from our loved ones for months on end. We do it because it’s important and we are people of service. We are committed to something larger than ourselves: the protection of America's interests around the world and democracy.

This made them feel proud and connected to him as their leader. Rear Admiral Frank Thorp, who served on Admiral Clark’s personal staff, recounted an occasion when he spotted a sailor with tear-filled eyes after hearing Admiral Clark speak. Thorpe approached the young man to see what was wrong. The sailor said he was going to ask his commanding officer to rip up the discharge papers he had recently submitted, because for the first time a leader had told him why he should stay in the navy.

Admiral Clark strongly supported an increase in pay that was approved by the president and Congress. When navy budget officials proposed cuts related to training and developing people as part of the annual planning cycle, Clark wouldn’t allow it. Instead, he increased the training budget. As part of what Clark called the revolution in training, he established the Naval Education and Training Command and required everyone in the navy to have a personal development plan.

He changed the performance appraisal system to provide constructive feedback for everyone, and added the requirement to leaders’ performance appraisals that they help sailors learn and grow. He valued personal growth and continuous improvement, saying, “if you are not growing, in my view, you are of little value to the institution...if you are not growing, you're dead.”

In the navy, enlisted sailors sometimes feel like second-class citizens compared to the officers. Admiral Clark made it one of his priorities to blur some of the lines between the officers and enlisted sailors, while still maintaining the necessary decision-making chain of command. When he traveled to commands and bases around the world, Admiral Clark met with commanding officers, as well as the master chiefs, their enlisted counterparts. He intentionally reached out to the master chiefs because he valued them and what they could do for the sailors under their leadership. He told them, these young sailors under our command swear to support and defend the U.S. Constitution from all enemies and we as leaders need to make promises in return. We need to give them the training and resources to enable them to fulfill their promise. We need to give them an opportunity to prove what they can do.

Admiral Clark recognized the importance of the enlisted leaders because of his own experiences as a sailor. He often told a story of his first experience on a ship following officer candidate school.

I didn’t know the pointy end of the ship from the blunt end. It was scary, really. But fortunately there was a master chief there who took a liking to me, Master Chief Leedy. For some reason, I don’t know what possessed him, but after I had been there about a week he came up to me, and put his arm around me, and he said, “Mr. Clark, I’m going to help make you into a fine officer.”

The advice and encouragement from Master Chief Leedy helped make Clark a better officer. He said that he, and our country, needed the master chiefs to mentor and encourage today’s young sailors in the same way. They listened—Master Chief Petty Officer of the Navy Jim Herdt, once said that master chiefs around the world had the general attitude that “Old Vern is counting on us and we can’t let him down.” He made them feel valued, and when they reached out to help those under their command learn and grow, the sailors felt valued too.

Clark also worked to change the legacy systems that devalued sailors, such as the navy’s job assignment process. Under Clark and a program he dubbed “the revolution in personnel distribution,” the system was changed to a job bidding approach, with incentive compensation for the jobs and locations that were least in demand. As a result, the percentage of sailors forced into positions or locations they didn’t want was reduced from 30 percent to around 1.5 percent.

In group meetings with leaders, Admiral Clark encouraged participants to speak up. His own approachable, conversational style set the tone for others to share their ideas and opinions. He asked everyone to “challenge every assumption,” “be data driven,” and “drill down” into the details. He challenged them to “have a sense of urgency to make the navy better every day” in order to deliver greater efficiencies and readiness for the dollars America invested in the navy.

Clark was more concerned about getting it right than being right himself. He encouraged “constructive friction,” which he said made it safe for people to disagree and express views that were outside the consensus view. As a result, Clark’s leaders felt connected with him and the U.S. Navy, and they emulated his leadership style, which made the sailors under their command feel more connected.

Clark is quick to say that he’s not perfect. Nonetheless, the navy achieved some impressive gains during his tenure as CNO and many naval leaders have praised his leadership and positive influence. In a little more than a year after Admiral Clark became CNO, first term re-enlistment soared from less than 38 percent to 56.7 percent.

As the navy improved sailor retention and developed greater alignment with Admiral Clark’s vision, it became faster and more responsive. Within a matter of hours following the terrorist attacks on September 11, 2001, aircraft carriers, Aegis destroyers, and cruisers were in position to protect America’s shores. This was partially due to the fact that naval leaders anticipated what had to be done and took action before they received orders. After the Pentagon was attacked, communications and the navy’s decision-making process were quickly reestablished, and planning for America’s response began while the embers of the fire still smoldered a short distance away.

Editor’s Note: This post is adapted with permission from Connection Culture: The Competitive Advantage of Shared Identity, Empathy and Understanding at Work.

Hear more from Michael Stallard and Admiral Clark in their podcast interview, "Changing Culture and Developing Talent in the U.S. Navy: An Interview with Admiral Vern Clark," for ATD members only.

Michael Lee Stallard (www.MichaelLeeStallard.com) is a thought leader, author, speaker, and expert on how human connection in culture affects the health and performance of individuals and organizations. He is the president and co-founder of E Pluribus Partners and the Connection Culture Group. Michael is the primary author of Fired Up or Burned Out: How to Reignite Your Team’s Passion, Creativity, and Productivity and Connection Culture: The Competitive Advantage of Shared Identity, Empathy and Understanding (ATD Press).