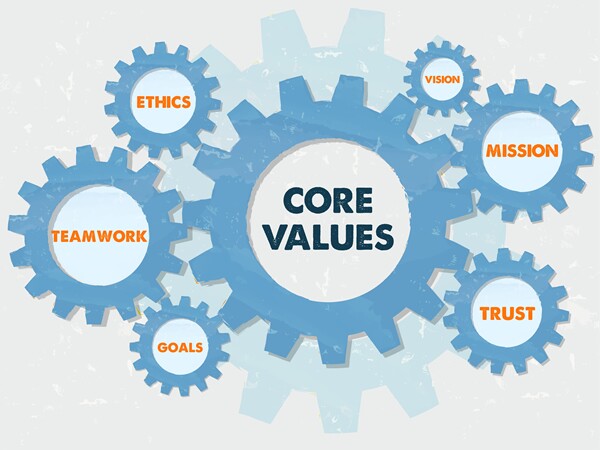 In the last couple of decades, the corporate world has been bogged down by scandals, scams, financial crises, and bankruptcies. Who can forget Enron, WorldCom, Satyam, or the Lehman Brothers? On the other hand, companies such as Chevron, Procter & Gamble, and Johnson & Johnson command immense respect and are still going strong after a hundred years.

What distinguishes the Chevrons from the Enrons of the world? Is it their market savvy, technological superiority, need-satisfying products, or their extraordinary people?

These companies survive on their culture, essentially a manifestation of their corporate values. It is these core values that guided them to the right decisions for long-term growth and life.

In 1994, Jim Collins and Jerry Porras wrote a book titled Built to Last: Successful Habits of Visionary Companies, based on their research of 18 visionary companies that have consistently outperformed their competition. Collins says that there are six timeless fundamentals that visionary companies follow:

These fundamentals shape corporate culture and create a foundation on which it grows. They also establish the values system that the company identifies with.
After the book was published, many companies rushed to write a corporate-values statement; unfortunately, a lot of them misunderstood what corporate values are. “Maximizing profits,” “increasing shareholder value,” and “becoming the leader in our field” are not values; they are aspirations. Corporate values go deeper than that. For example, every company has to operate within a framework of laws, regulations, and statutes. When a company states that it will follow not only the letter of the law, but also the spirit of the law, that is a corporate value. Committing to sustainability and operating in an environmentally friendly way is also a corporate value.

The successful companies mentioned in the introduction:

Here’s the difference between successful companies and companies that will probably not make it through the next five years: A successful company’s values are set by its founders, passed down the ranks, and nurtured and sustained across generations. Its unsuccessful counterparts make up a set of values that change with each new generation of owners, and ends up as a value statement on the company’s website that is not translated into practice within the organization.

How Do You Create and Sustain Corporate Values?

Creating corporate values begins with the founders of the company, who create the core values based on their beliefs and build the organization’s culture based on these values.

The values must be passed down from generation to generation. Managers, stakeholders, and employees must individually nurture and sustain these values. Additionally, they should regularly monitor the values; there should be mechanisms for people to raise red flags in case values are compromised.

Good corporate values have a positive effect on the bottom line too. A 2013 research paper found that “when employees perceive top managers as trustworthy and ethical, [the] firm’s performance is stronger.”

It is a staggering fact that 32 percent of all U.S. companies will not be around in five years. This is no surprise, given that the basic core values that sustain a company’s longevity are compromised by the day-to-day pressures of business. Companies must take time to develop—and revisit if necessary—their values system, and make it as important as profits, expansion, revenue, increased productivity, and customer satisfaction.

Today’s workplace consists of employees who work around the clock, maybe from their homes, across geographic locations, interacting with colleagues virtually. It’s therefore more important than ever before to have a set of core values in place, because it’s only these values that unite this dispersed workforce and enable the company to function as a unit.

It is particularly important for young entrepreneurs to realize this, especially when their company starts to grow and mature. This is the time to develop a formal company culture, before the organization grows too big for a full hands-on approach.

As Robert Haas, chairman and CEO of Levi Strauss said, “A company’s values—what it stands for, what its people believe in—are crucial to its competitive success. Indeed, values drive the business.”