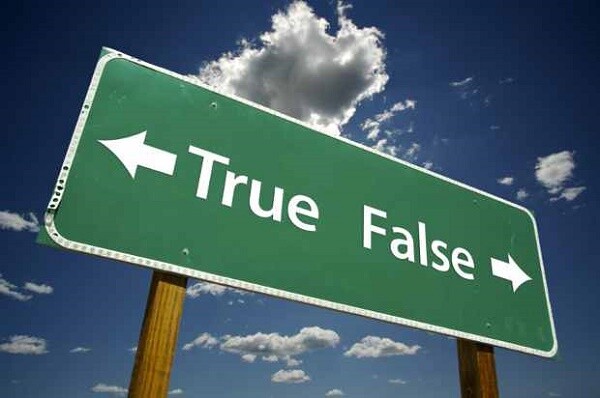 Debunk This: People Remember 10 Percent of What They Read

Learning is infinitely complex. I contend that it is much more complex than rocket science. Human cognition is an amalgam of multiple systems and twisted interconnections. Even today’s neuroscientists struggle to fully map our cognitive architecture.

As James D. Watson said: “The brain is the last and grandest biological frontier, the most complex thing we have yet discovered in our universe. It contains hundreds of billions of cells interlinked through trillions of connections. The brain boggles the mind.”

Fortunately, wisdom has come down through the ages, from Aristotle to Pliny the Elder to Sophocles to Confucius, and so on. What’s the percentage of information do we retain? This wisdom can be best summarized as that people remember:

This is wisdom that we, as learning professionals, ought to integrate into our learning designs. Unfortunately, the complexities are daunting. I will attempt to disambiguate recommendations here, based on current understandings of brain science.
The Cone of Experience

First, it’s helpful to review to Edgar Dale’s elegant recommendations based on the visual metaphor of a cone. Dale, working in the 1940s, anticipated the findings of neuroscience decades before functional magnetic imaging techniques made brain science possible. 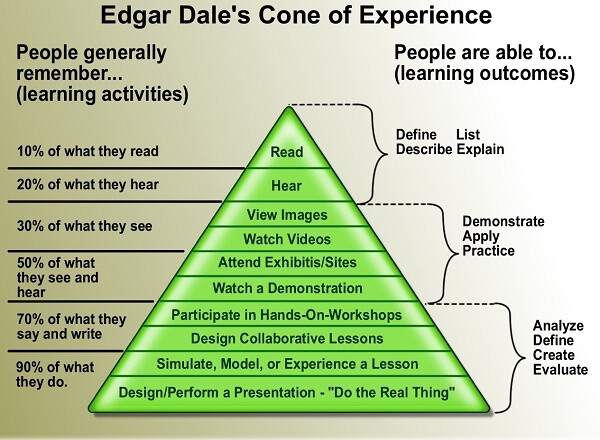 Note that clear recommendations are evident in the cone. If we want our learners to learn the most, long-term, we should have them “design/perform a presentation.” Or more succinctly, they should “do the real thing.” While this may seem confusing at first, its wisdom is undeniable.

Learning professionals should also help people “say and write” by having them “participate in hands-on-workshops.” Again, if this seems confusing, ignore your skepticism and accept the wisdom, because neuroscientists are simply smarter than me and you. Finally, a note on audio visual content, it’s much more valuable to “watch a demonstration” rather than “watch videos,” especially if there are cute cats in those videos. It seems that Edgar Dale even anticipated YouTube.

Indeed, many believe that Dale and his learning methods were simply amazing. Some have even said that he was the Buddha, reincarnated. But I digress…

The Zen of Learning

Did you know that if someone mentions scientific verbiage, that you’re more likely to believe them? Yes, there’s even research on this!

Let me tell you the truth: almost everything I’ve written in this post up to this point is false! Erase it from your mind. Unfortunately, the information above is regularly conveyed within the learning field—as if it were immutable truth from the ancients or undeniable truth from the latest in neuroscience.

If you found yourself believing while reading the words above in this blog post, you’re not alone. Most of us, it seems, are suckers for this kind of misinformation.

In a series of articles in the most recent edition of the journal Educational Technology, I and three fellow researchers explored how this misinformation has been passed down over time. You can read my full synopsis of the research articles on my blog, but let me briefly outline the findings here:

There is no scientific evidence to back up the percent-remembering numbers. Indeed, anybody who knows anything about research would know that results that round to numbers ending with a zero or a five are simply not credible. More importantly, the numbers directly contradict much of what the real scientific research tells us about learning.

My collaborators—and I must say the others did most of the historical legwork—found the first mention of the percent-remembering numbers from 1914 and 1922. In those publications the numbers were characterized as findings that were long known, but no specific research was cited. It’s really a rather fascinating case study of how misinformation flows from person to person, from publication to publication. Indeed, we found at least eight publications commonly cited as the place where the research on the percentages could be viewed in its elemental form. In NONE of these publications was any research described!

Edgar Dale did create a cone, but his didn’t have any numbers on it. See an image from the original version from his book.

Just as critical, Dale didn’t intend his cone, also called pyramid of learning, to be prescriptive. That is, he didn’t want us to use his cone to make instructional-design decisions. He created his cone as a descriptive model, attempting to capture what the learning landscape was like back in 1946.

What You Can Do

The most important thing we can do as professionals is to be skeptical when we encounter “research” or evidence. With a healthy dose of skepticism, we’re less likely to be infected with misinformation. In addition, we need to stand up for the professionalism in our field by gently pushing back against the bad information—and those who convey it.

Check out The Debunker Club to make such a commitment.

Editor's Note: Source for the Dale Cone of Experience images is http://www.willatworklearning.com/myths_and_worse.

Check out similar articles: Brain Rules: What Science Says About How We Learn

This article was originally published in March 2015 and has since been updated with new information and resources.

Education
Adult Learning Certificate
Harness the experience and self-direction of adult learners in all your development initiatives. Reach your adult learners where they are with best practices and proven techniques.
Learn More

About the Author
Will Thalheimer

Will Thalheimer is a learning expert, researcher, instructional designer, business strategist, speaker, and writer. He has worked in the learning and performance field since 1985. In 1998, Will founded Work-Learning Research to bridge the gap between research and practice, compile research on learning, and disseminate research findings to help chief learning officers, instructional designers, trainers, e-learning developers, performance consultants, and learning executives build more effective learning and performance interventions and environments. He speaks regularly at national and international conferences. Will holds a BA from the Pennsylvania State University, an MBA from Drexel University, and a PhD in educational psychology: human learning and cognition from Columbia University.