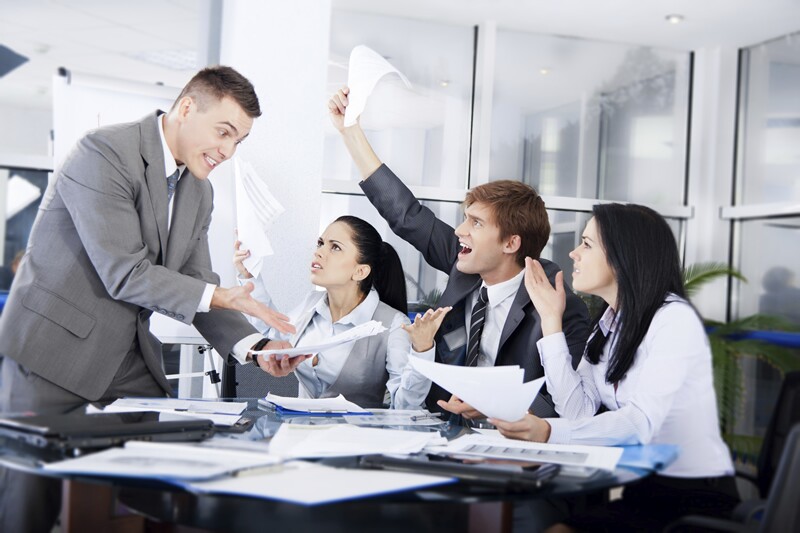 Does Your Team Have Enough Conflict?

Remember that band you used to love in high school? You know, the one that had the best songs, but the lead singer and the drummer were always arguing? Finally they decided to split up and go their separate ways, and neither of them had a hit for the rest of their careers.

Creativity is born from conflict. You want to do something one way, and I have a different idea. Since we don’t have the time or the resources to do both, we have to choose or compromise. This isn’t a bad thing, it’s a natural part of collaboration. But a surprising number of managers believe that their job is to be a peacemaker or a problem solver, rather than someone who encourages conflict.

The teambuilding process is typically described as a four step process:

In the forming stage, everyone is polite and nice. We’re getting to know each other, so we’re all on our best behavior. But sooner or later (sooner, if you have talented people with strong opinions who want to do great work) all teams move into the storming phase. They disagree, sometimes strongly. It’s these disagreements that help teams explore each other’s expertise, get to know who’s best at what, and truly see one another clearly.

This is also where many managers freak out.

The storming phase can be disconcerting, but the manager has a critical role to play. Rather than trying to downplay the conflicts, or solve all the problems, your job as a leader is to facilitate the debate. Here are some tips for keeping things healthy, while still encouraging open dialog:

Healthy conflict is a sign of engagement and collaboration. If your team never disagrees, you might have a significant problem.

About the Author
Katy Tynan

Katy Tynan is the bestselling author of practical guides to career transitions, and an internationally recognized expert on how work is evolving. In a world where 70 percent of employees are disengaged, Katy helps organizations ditch out of date management practices and create an inspiring, engaging culture.

Over her 20 year career in IT and operations consulting, Katy has advised hundreds of organizations on how to find innovative solutions leveraging technology and human capital for competitive advantage. Katy has been part of multiple successful startup exits including Winphoria Networks (acquired by Motorola in 2003) and Thrive Networks (acquired by Staples in 2007).

Katy is currently Managing Director of CoreAxis Consulting, a leading talent strategy and elearning and training firm based in Boston, Massachusetts. Katy is the author of Survive Your Promotion! The 90 Day Success Plan for New Managers, and her most recent book Free Agent: The Independent Professional's Roadmap to Self-Employment Success.