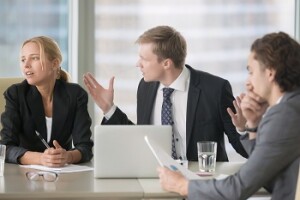 "Do not tolerate brilliant jerks. The cost to teamwork is too high."

Chances are high that you’ve been on a team with a brilliant jerk. Nearly all of us have, at one time or another, worked on a team with someone who does an exceptional job delivering results, but doesn’t work effectively with others.

Being brilliant relates to what a person knows, or their competency. Being a jerk relates to who a person is, or their character. Therefore, a brilliant jerk is one who does an exceptional job delivering competency-based results, but can’t get along well with others. These brilliant jerks permeate the workplace while reducing their leaders’ credibility, lowering their teams’ morale, and reducing their teams’ productivity.

Ultimately, the jerk is responsible for developing their own character. They own who they are. However, a jerk is allowed to contaminate the spirit of a team because of who someone else is: the leader of the team. The character of the team’s leader is the root cause of jerk contamination. Leadership truth: If there's a brilliant jerk on a team, there's a low-impact leader allowing them to be there.
Tom Landry, one of the greatest and most innovative coaches in National Football League history, remarked, "Perhaps the toughest call for a coach is weighing what is best for an individual against what is best for the team. Keeping a player on the roster just because I liked him personally, or even because of his great contributions to the team in the past, when I felt someone else could do more for the team would be a disservice to the team's goals."

High-impact leaders do not tolerate brilliant jerks. These leaders have exceptional character. A byproduct of well-developed character is a lack of tolerance for those with poorly developed character. High-impact leaders don’t expect everyone to be perfect, but they do expect everyone to be intentionally improving and developing their character.
High-impact leaders inherit teams when they are hired from the outside, promoted from within, or transferred internally. They may also hire someone only to discover their character flaws as time passes. Once they discover they have a brilliant jerk on their team, they will take action and change them (grow and develop them) or remove them. Because high-impact leaders value growing and developing people, that’s where they focus first. And that demonstrates respect for, and builds trust with, the team.

High-impact leaders focus continuously on their own personal growth and development. As a result, they are mentally prepared to model the desired character traits for their team. They are also prepared to help grow and develop brilliant jerks in an effort to convert them into brilliant high-impact team members. They are patient with brilliant jerks who are willing to look in the mirror and do the hard, but necessary, character work that will transform them into high-impact team members.

High-impact leaders also know brilliant jerks who are unwilling to work on their character do not share the same values and will negatively affect the culture. Keeping them on the team is not an option for high-impact leaders. These rare, but highly effective, leaders will waste no time making the right decision. They will quickly terminate any jerks, brilliant or otherwise, who make it clear they are not interested in becoming high-impact team players.

High-impact leaders who don’t tolerate brilliant jerks are always rewarded with more buy-in, increased loyalty, improved morale, and higher performance. When they demonstrate they have the courage to do the right thing for the right reason at the right time, they build trust with their entire team. Dee Ann Turner, vice president of talent at Chick-fil-A, said it best in her book, It's My Pleasure: The Impact of Extraordinary Talent and a Compelling Culture: "Surrounding ourselves with talented people whose character matches our own, whose competency matches our need, and whose chemistry matches our team not only sets us up to win, but makes the endeavor much more enjoyable."

Learn more about how to deal with brilliant jerks in our upcoming webcast.

About the Author
Mack and Ria Story

Mack and Ria have an amazing story of professional growth, personal growth, and transformation. Mack began his career working on the front lines of a machine shop while Ria started hers in healthcare administration, after overcoming years of difficult childhood. Working in completely different industries, they both began to apply leadership principles to their respective careers with incredible results personally and professionally and developed a passion for leadership.  They founded Top Story Leadership, and offer motivational speaking, leadership development training, coaching, and consulting. Their clients include Chick-fil-A, Auburn University, Koch Industries, and Kimberly-Clark. Together Mack and Ria are now creating and living the life they want, rather than the life they were given.