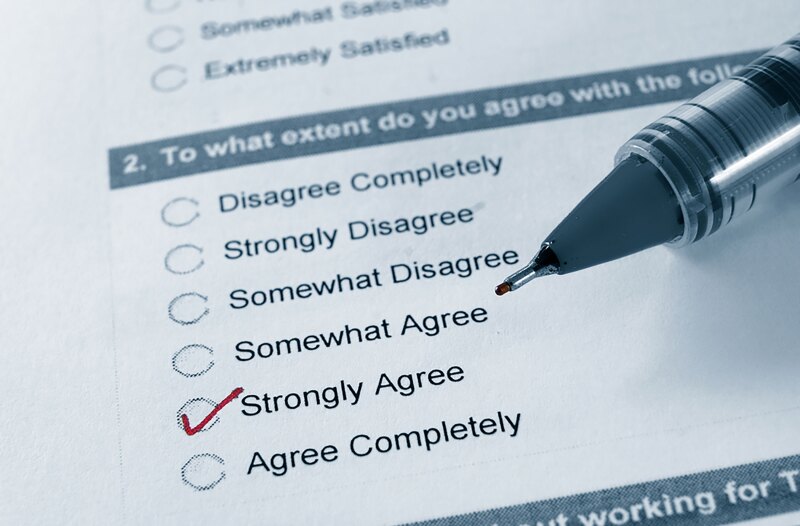 Evidence-Based Survey Design: Do You Agree or Somewhat Agree?

You may have used the Likert scale in your survey questionnaires to measure various topics such as learner satisfaction, employee engagement, or organizational culture. When American social psychologist Rensis Likert developed a five-point response scale in the 1930s, his original wording was strongly approve, approve, undecided, disapprove, and strongly disapprove (Likert, 1932). Since then, the wording in the Likert scale has been changed to strongly agree, agree, neutral (or neither agree nor disagree), disagree, and strongly disagree.

How do you analyze and report the data obtained from the Likert scale? Some of you may report percentages (for example, strongly agree = 75%, agree = 13%, neutral = 5%, disagree = 3%, strongly disagree = 4%); some of you may report average scores (e.g., M=4.2). Which method should you use? Your decision can depend on whether you treat the Likert scale as an ordinal or interval scale.

To make the most appropriate choice for your data presentation, you need to know what ordinal and interval scales are about.

There are four levels of measurement scales, each of which produces different types of data (Stevens, 1946).

What is your job title?
a. Instructional designer b. Trainer c. E-Learning developer d. Other

How often have you used the checklist since it was made available?
a. Never b. Seldom c. Sometimes d. Often e. Always

(This can be changed to a negative to positive scale, illustrating the zero value being an arbitrary value.)

What is your current income?

Figure 1. A possible perception of the five levels in the frequency scale.

Figure 2. An illustration of changed perceptions after adding a modifier Slightly to Disagree and Agree on the Likert scale (based on Worcester and Burns, 1975).

What do we learn from this research and how can we apply this evidence to our survey design practice?

Figure 3. A screen shot of Qualtrics showing a new survey item with an automatic choice of a five-point Likert scale.

This Insights article is one in a series of evidence-based survey design articles that I present to help practitioners make evidence-based decisions when designing surveys. For more information about this topic along with review of inclusion or exclusion of a midpoint in the Likert scale, please see this article published by my research team at Boise State University’s Organizational Performance and Workplace Learning department.