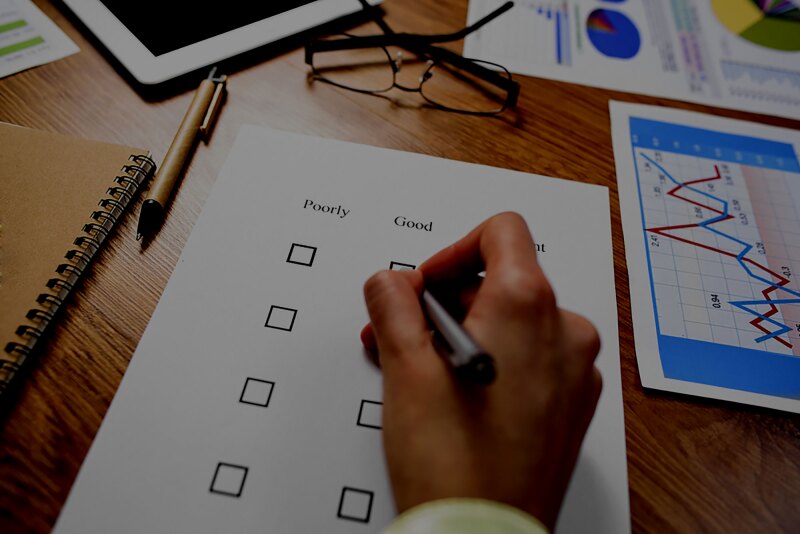 Evidence-Based Survey Design: Exclude or Include a Midpoint?

In the 1930s, American social psychologist Rensis Likert developed the Likert Scale, which is a type of rating scale used to measure attitudes or opinions by asking respondents to rate items on a level of agreement. You likely have used the Likert Scale or something similar in survey questionnaires to measure topics such as learner satisfaction, employee engagement, or organizational culture.

The wording of his original five-point scale—strongly approve, approve, undecided, disapprove, and strongly disapprove—has changed to strongly agree, agree, neutral (or neither agree or disagree), disagree, and strongly disagree. Some practitioners, however, prefer using a four-point Likert Scale without a midpoint. Ask your colleagues why they prefer one way or the other. Their reason may be, “I [do or don’t] want to force people to choose sides, so I [do or don’t] want to [exclude or include] a midpoint.” Other than personal preference, what other sources could you use to understand the benefits and challenges associated with inclusion or exclusion of a midpoint in the Likert Scale?

Research is a good source to use! The information in this post is based on numerous findings on the Likert Scale midpoint issue.

Misusing a Midpoint as a Dumping Ground

A midpoint allows survey respondents to express their neutral feelings toward a presented subject (such as feeling equally toward agreement and disagreement). Research shows, however, that some survey respondents may use a midpoint as a dumping ground, especially when they:

So, if presenting a midpoint in the Likert scale can result in incorrect data, should you exclude it? Not necessarily.

What to Do About Incorrect or Missing Data

Omitting a midpoint can create another problem. When a midpoint is absent, respondents who truly feel neutral about the survey topic:

Whether you include or exclude a midpoint, you may end up getting some incorrect data due to its design. Figure 1, for example, illustrates how the data could be distributed when a midpoint was provided versus not provided (Johns 2005). In this public opinion survey, when neither wasn’t available, the 26.6 percent of neither responses were redistributed mostly to agree and disagree categories. It is difficult to determine which results reflect true responses—the increased agree and disagree responses when neutral was not allowed or the decreased agree and disagree responses when neutral was allowed. So, what should you do?

Figure 1. Data distribution difference when a midpoint is available and when it is not (based on Johns 2005). 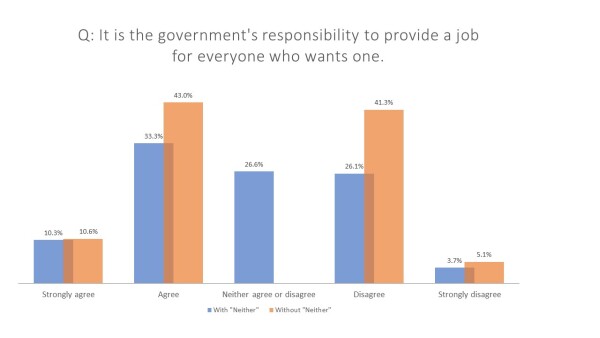 Adding Additional Options to the Scale

One way to handle these potential problems is to present the Likert Scale with another option, such as I don’t know, no opinion, or not applicable. Not all survey items would need these additional options; use your best judgment.

Let’s say, for example, you are aware that some trainees didn’t attend all sessions of a multi-day workshop. Since they missed some of the workshop activities, it may be good to add an “I don’t know” option in your survey. You may assign one through five to the five Likert Scale options but exclude the I don’t know responses when calculating an average score of the data.

Or, if you use a standardized survey questionnaire for face-to-face and e-learning courses, some questions may not apply to both options. In that situation, it would be appropriate to add a not applicable option.

Including or excluding a midpoint has benefits and problems, so it is more important to ask yourself, not if, but when you want to include or exclude a midpoint. You may want to include a midpoint to allow respondents to express their neutral feelings or you may want to treat the Likert Scale as an interval (this topic will be discussed in another article). Believing that respondents may use a midpoint as a dumping ground is an argument in favor of excluding the midpoint. Whichever type you choose, use it consistently across multiple survey items in your questionnaire, especially if you plan to combine data (for example, generating an average score). And, you can always add the I don’t know or not applicable option as needed.

This Insights post is one in a series of evidence-based survey design articles that help other practitioners make evidence-based decisions when designing surveys. For more information about inclusion or exclusion of a midpoint in the Likert Scale, read "Evidence‐Based Survey Design: The Use of a Midpoint on the Likert Scale," by my research team at Boise State University’s Department of Organizational Performance and Workplace Learning.