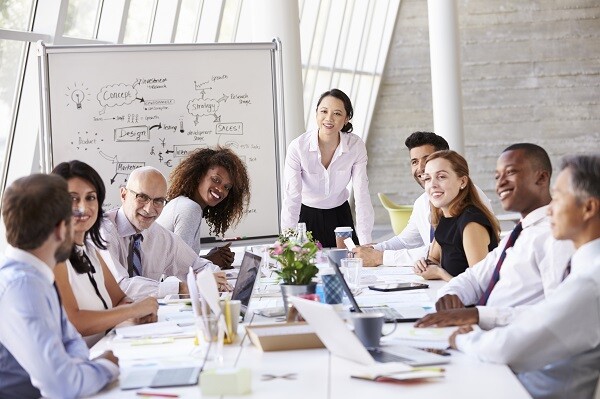 Women are the ultimate doers, those self-motivated responders who do the right things the right way for the right reasons. For decades their very survival in workplaces around the world has depended on their collaboration skills and their ability to overcome adversity, often without acceptance, recognition, or appreciation.

It is time now to take advantage of the inclusionary thinking (“let's find the best way”) traits that women bring to leadership roles. The traditional workplace tendency toward exclusionary thinking (“my way is the best way”) fosters myopic, top-down decision making, which limits the organization’s ability to recognize and act upon the internal signals that a change is needed and to make the appropriate course correction in time for it to matter.

“Why CEOs Fail,” a FORTUNE magazine cover story (June 1999), investigated the firing of 38 Fortune 500 top executives. These men were smart and highly acclaimed. A two-pronged weakness brought them down: failure to put the right people in the right jobs and failure to seek information from multiple sources.

The historic tendency to overlook women for senior positions, commonly called the “glass ceiling,” has resulted in a lack of institutional opportunity for women to be valued for their problem solving and decision-making attributes and their propensity to work together in teams to get the job done better, cheaper, faster.

This disturbing trend was identified more than two decades ago and should have set off alarms when such dysfunctional behavior was first documented. Instead, CEOs continued to build bigger organizations in search of greater profits, and the opportunity to learn from and act upon a valuable lesson was overshadowed.

Fortunately, Sally Helgesen, author of The Female Advantage and The Female Vision, captured the essence of this troublesome pattern and provided solutions to those few leaders brave enough to intervene. And now in her new book, How Women Rise, she and co-author Marshall Goldsmith tell women how to "break the habits that are holding them back." As useful as this information is to those women being held back, shouldn't leaders from both genders be working together on this challenge?

The declining presence of females in the top ranks has been cited as the reason for another trend whereby enterprising women of all ages and educational backgrounds are less likely to pursue a career in a tradition-bound organization, opting instead to start firms and foundations of their own.

Statistics from the U.S. Small Business Administration show that the success rate of business start-ups has been steadily rising, which is correlated to the increase in the number of women-owned businesses.

One female entrepreneur, for example, started training young women as coders for the high-tech industry because universities were not recruiting females into this male-dominated field of study. So far she has placed 40,000 women in high-paying jobs nationally.

Another woman started a company that trains mechanical workers for the energy industry. Companies like AT&T and General Electric reimburse her once the certified graduates are hired and found to have the requisite skills for success.

In his bestseller, The Purpose-Driven Life, Rick Warren provides a parallel conclusion: “The world needs contribution. We don’t just need communication, compassion, and consideration. We need people of action and a bias for achievement.” This is not likely to happen if women are continually undervalued.

It should be obvious to anyone tracking workplace trends that we need a balanced strategy that takes advantage of both feminine and masculine leadership traits.

This game-changing attitude toward equality has already begun in the TV and motion picture industry, where men like Justin Baldoni have started a dialogue about redefining masculinity. Justin put forth this challenge to the men in the TED Women 2017 audience: "Are you brave enough to be vulnerable? Are you strong enough to be sensitive? Are you confident enough to listen to the women in your life?"

Such a behavioral transformation is needed in every workplace. There is a growing awareness of the need for more female leaders in the top echelons, and there are multiple associations and organizations looking for ways to more fully utilize the many talents women bring to the workplace—all of which is encouraging.

Unfortunately, a change of this magnitude will not come about quickly enough to make a meaningful difference because those with the positional power to realign corporate priorities have other more immediate challenges to occupy their minds.

One way to accomplish this is to establish open-learning forums at all levels, where doers of both genders gather to discuss, discover, and determine the best way to create a culture where female leadership is celebrated, female achievements are recognized and rewarded, and where female core values and underlying assumptions are shared and affirmed.

So, that leaves it up to the talent development profession to accept the responsibility to create top-of-mind awareness within its sphere of influence and to create a methodology for implementation.

JG
About the Author
Jacklyn Graham

Jacklyn Graham has more than 30 years experience in the financial services industry with expertise in investment management, internal audit and records management. She worked collaboratively in team environments to accomplish goals. Jacklyn also has background in management, business division planning and statistical analysis. Her experience in doing presentations includes: Board of Directors meetings, seminars, certification courses and other professional meetings. She holds a Masters in Business Administration from City University in Seattle, Washington, and is a graduate of the Pacific Coast Banking School.

Justine Fraley
October 21, 2018 11:51 PM
Thanks for the article guys. I would love to see a follow up article that digs more into ways companies are and will be accomplishing this!