For Work-Life Balance, Men Are Own Worst Enemy 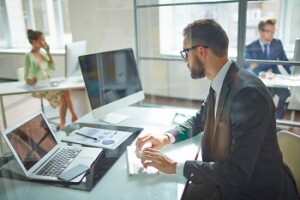 The Economist recently published an in-depth look at some of the research into how men think about and use parental leave and other work-life flexibilities. Between the data and multiple interviews with men, largely representing Generation X and Millennials, they found that one of the biggest obstacles to men taking a larger role in their family life is that they’re afraid to take leave or work less.

Between 1977 and 2008, the percentage of men reporting a conflict between their career and their family went from 35 percent to 60 percent, while the percentage of women only increased by 7 percent, even though women do twice as much housework and childcare, on average, as men. In surveys, professional men want to spend more time at home just as often as women, but are significantly less likely to take advantage of family-friendly policies and flexibilities.

The most important factor is what other men are doing. Research shows that men are more likely to use parental leave and other flexibilities if other men are using them and if they are explicitly marketed as for men. This is in a world where, labor-saving technologies notwithstanding, the more time you spend at work, the more you earn. Research shows that the more time someone spends in the office, the more they earn, which has been increasingly the case since the 1990s.

Where does all of this come from? One theory holds that masculinity is seen as a status you earn, rather than an innate part of being a man. Because of that, men spend time and energy policing what is acceptable behavior and get locked into behavioral patterns which don’t help anyone involved. Indeed, given how much dissatisfaction that every man in this story expressed, it almost seems like modern men have built themselves a prison that doesn’t need any guards.

This is not to say that women have it easy. As one recent study noted, Generation X and Millennial women seem to be losing ground compared to Baby Boomers at the same phase of life. For example, their poverty rate is 37% higher, their suicide rate has gone up by 30%, and they are 10 times more likely to be in prison. But the best way to make it easier for women to “lean in” would be for their husbands and partners to feel free to take up more of the slack at home. Not to mention that one 15-year study found that men were in better health and happier when they split their home responsibilities more evenly with their wives as compared to when they focused more on work.

What does this mean for talent management in the government? It’s tempting to assume that, with a standardized government pay system, these issues will be left for the private sector to manage. All the research, which just focuses on working men in all fields, suggests otherwise. If the biggest driver of change is the attitudes of men in the workplace, then this is a cultural issue. Making life easier for working fathers and creating a world where men feel free to spend more time with their families is as easy as demonstrating a different way of thinking. HR staff should be proactively communicating on these topics and creating a space for dialogue.

Managers and leadership can lead by example and shift the culture by showing how professional success and serving the public are compatible with raising the next generation of Americans. It would be ironic, after all, if we fell short in our responsibility to our children, even as we serve the public. All it takes is to stand up and show a better way.

About the Author
Joe Maltby

Joseph Maltby is the director of research for Young Government Leaders, an association of young leaders in government which seeks to provide an authentic voice for that generation in public service. He also creates short educational videos on YouTube covering government and policy issues.  He is a federal employee working on federal retirement issues.