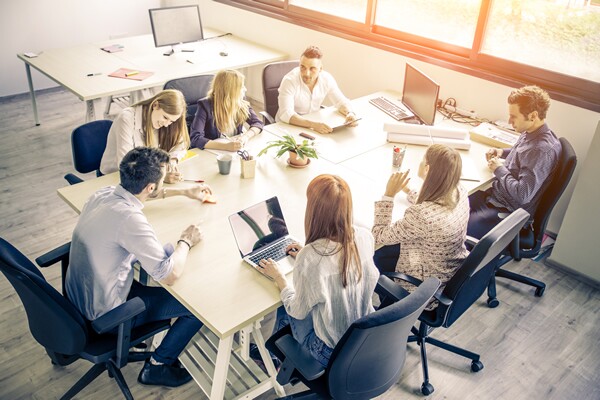 When the group is in flow, it is essentially of one mind, with the purpose to do something greater than each member could do on his or her own. Because complete concentration is required to be creative and actively listen to the group, the transformative leader must be consciously proactive in determining where group flow will be most easily obtained.

According to estimates, on average, workers are distracted every three minutes and require 23 minutes to get concentration back. However, some research suggests that 40 percent of the time they don’t return to the task they were working on prior to the interruption.

Bottom line: group flow requires concentration. Managers need to draw a boundary between the group’s activity and all other obligations. Give the team space to be isolated and uninterrupted. This can range from having the group meet in a conference room for an hour to co-locating their workspace in a bullpen. Experts in agile development and design thinking also advocate colocation for facilitating optimal communication and concentration.

This begs a multimillion dollar question: How can virtual teams get into flow? Transmission latency, accidental mute, difficulty hearing all members, and lack of communication by body language are major impediments to group flow because these serve as distractions. But you can’t just throw up your hands and exclude a chief scientist in Germany, head of production in China, chief creativity officer in New York, or a prominent professor in Turkey from your innovative endeavors.

To get creative group flow with remote participants, follow this simple formula for structuring meetings.

Step #1: Have a strong and focused agenda. Tell the group why this work needs to be done; give them the context and the ultimate goal. In addition, tell each person why he or she was invited to the meeting.

Step #2: Notify members in advance what will be required of them. This doesn’t mean “bring the solution,” because we want to build on the contribution of all members. But advance preparation is key. Have all members do creative thinking exercises on their own prior to the meeting.

Step #3: Keep all members engaged throughout the meeting. This requires two key but controversial rules:

Step #4: The group leader must possess the talent for being both firm and flexible. Set the expectation that team members will attend the virtual meeting having done their homework, give each member time to present, but be alert when flexibility is needed. If one person’s contribution stimulates fruitful conversation, allow it. Don’t impose artificial time constraints. If only one person formally presents her ideas, but the group starts to run with it, allow it. Communicate that ideas from others will be heard later or in a separate session.

Also, don’t be rigid with the end time of the meeting, but don’t allow people to ramble on. If you expect to need an hour, ask people to be available for 90 minutes. If the creative energy fades after 45 minutes, take a break, try another creative exercise, or adjourn the meeting.

Group flow is fragile. It is blown away by interruptions, external demands, and lack of engagement. Today’s corporate climate requires a heavy hand to protect a group’s concentration, but group flow is worth pursuing because today’s innovations emerge from ever more complex interfaces and team interaction. No doubt, these rules are counter-cultural in most workplaces. But if you follow them, you’ll certainly gain a lot more respect as a leader!

About the Author
Laurie Buss

Laurie Buss is an aerospace engineer, market analyst, business consultant, fine artist, and an expert in workplace sustainability, efficiency, and strategy development. After a 23-year career working for and consulting to corporations like Hughes, Boeing, Northrop Grumman, Thales, and SpaceX, she now enables companies to cut meeting time in half, eliminate up to 80 percent of inefficiency in manufacturing and business processes, and increase profits with fresh ideas for product development and improving business operations.