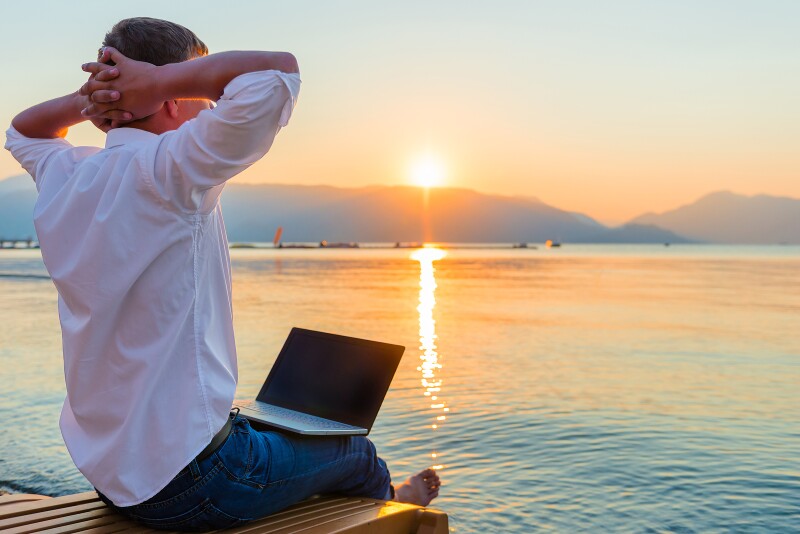 How to Fix Our Broken Relationship With Time Off

Summer is here and vacation season is upon us! But if you are employed in the United States, evidence suggests that you won’t catch much R&R this summer. Various studies show that year after year, roughly half of those who are employed full-time in the States don’t use all of their allotted annual vacation time.

As if this statistic weren’t startling enough, it is worth mentioning that American workers are granted some of the least generous paid-time-off policies in the industrialized world. With an average of just 10 days of vacation time per annum, the United States trails far behind other GDP powerhouses like China (16 days), Japan (18 days), Germany (29 days), and the UK (28 days).

Some may be inclined to view this phenomenon as a testament to the unwavering American work ethic. But science says that Americans’ reluctance to take time off could have massive and negative consequences for their productivity, health, and engagement.

Why We Just Can’t Seem to Get Away

America has a complicated relationship with vacation, a dysfunction with roots in law and culture.

The United States is the world’s only advanced economy that does not guarantee its workers any paid leave—not for federal holidays, sick days, parental leave, or vacation time. This means workers are beholden to the generosity of their employer when it comes to time off. And as surveys suggest, U.S. employers are quite miserly about PTO, at least by the rest of the world’s standards.

But petitioning the U.S. Department of Labor to upend the laws, even if successful, may only amount to a drop in the bucket. After all, even sanctioned vacation days are going unused, suggesting that workplace culture may be the biggest culprit in robbing employees of their time off.

Employees cite numerous reasons for surrendering their vacation time. Project: Time-Off found that, in 2018, fear of looking replaceable, a stressful workload, and a sense that everything would fall apart in their absence made workers significantly more likely to leave vacation days on the table.

Too Busy for a Vacation? Take a Workcation!

In a culture so preoccupied with work performance and self-optimization, it would seem to be the natural course of things that “ workcati ons” are catching on among a growing number of companies in a wide range of industries. Though not yet part of the mainstream, the concept has its fair share of vocal supporters and promises to be part of the solution to America’s vacation dilemma.

Workcations take many forms, but the fundamental principle stays constant: Rather than begrudgingly (or, rather, with the helpless enthusiasm of a martyr) tending to workplace duties while on vacation, proactively make the decision to travel while working remotely.

For some, workcationing is a semi-permanent lifestyle. Kari DePhillips and Kelly Chase of The Content Factory, for instance, travel and work full time, running their PR company remotely as digital nomads.

“Workcationing is about fully immersing yourself in your work while also building in ways to pamper yourself and unwind so you can be even more effective and productive,” Chase told Fast Company. The pair cited the potential for travel to thrust them out of their routines as an effective way to keep their goals in check.

But workcationing doesn’t need to mean full-time globe-trotting. Some companies find that workcations can be especially useful when an important deadline is looming. Technology development company Kwamecorp, for instance, once flew part of its team to Bali for three weeks, where they focused intensively on a demanding project.

“Clearing our heads from regular worries filled our bodies with energy and bliss that allowed our minds to be more open,” writes design director Pedro Cardoso. “Any barriers to creative thinking were broken.”

Workcations are also compatible with the increasing popularity of flexible PTO policies. Under such policies, employees are free to be out of the office as often as they like, so long as they are responsibly meeting their deadlines and performance goals. This may mean taking two weeks off instead of one but calling in for an important meeting and cranking out a few reports while poolside.

Workcation: All I Ever Wanted?

Despite its supporters, the workcation model evokes skepticism, even hostility, in many. The phenomenon has been called “ the saddest sign of our times” and “ an anxiety trade-off,” and the charge isn’t unjustified. After all, when our vacation days are already so preciously few, the thought of choosing to work during vacation can seem like a symptom of workaholic Stockholm Syndrome.

But as Millennials begin to comprise a larger portion of the American workforce, the concept of employer-sponsored workcations is gaining traction. Project: Time-Off reports that only 18 percent of Baby Boomers find the idea of a workcation appealing whereas 39 percent of Millennials are interested.

Furthermore, studies suggest that blurring the boundaries between work and travel is especially appealing for those who feel that work is already encroaching upon their free time. Employees who forfeited vacation days for fear of appearing less dedicated to the job were significantly more likely to feel positively about the prospect of a working vacation than those who didn’t feel this way (37 percent versus 27 percent).

There is a fine line between workcation as a mental health and productivity hack and workcation as another shove toward chronic burnout. Researcher Kenneth Matos framed it concisely when speaking with the Wall Street Journal: “Is the workcation detracting from the vacation you were going to have, or is it enabling the vacation you otherwise wouldn’t have had?”

Having dedicated time to completely unplug from the demands of working life is important, no doubt. But in a nation where two-thirds of people are working during their vacations anyway, the time is ripe to consider how employers can foster a workplace culture that acknowledges this fact and empowers their workforce to take the time they need.

AN
About the Author
Alexandra North