How to Overcome Bad Workplace Communication 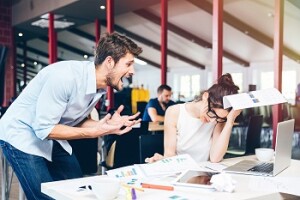 If you lead a team of employees, or have ever been in a management role of any kind, you probably found yourself in a scenario like this:

You have been given a new process for your team or department to follow for inputting requests for supplies. You must now provide those instructions to your team. You could communicate the change by holding a team meeting, sending out an email, or delegating the responsibility to another person. Regardless of the approach that you take, you expect that when you communicate the instructions it will be understood and followed by everyone on the team.

Communication is a simple process, or so it would seem.

According to Rose Johnson at Chron.com, the benefits of communication in the workplace including helping with diversity, team building, and employee morale. With something that vitally important, on so many levels, why do so many leaders struggle with it?

You have something that you need to say to another person, or perhaps you have instructions you need to provide. It seems the other person should be able to understand and comprehend what you are stating. As you have likely discovered, the process of communication can be much more complicated.

There have been times when you were not understood or your communication with someone else simply broke down.

Why Is Communication Difficult?

Communication is tough because the process of communication is complex, but it can occur very quickly. What you want to communicate to someone else may not be the message that is actually stated. Or if you do state the message correctly, the other person may still not understand it in the manner or with the meaning that you would like for them to have when they receive and interpret it.

There is a danger here because workplace communication has a significant effect on employee turnover. In many cases, it can be directly linked to losing top performing employees, if steps aren’t taken to fix the problem (see 5 Keys to Fixing Communication Before You Lose ANOTHER Employee).

This employee may not be prepared for the conversation, so they become defensive, tuning out anything else you might say. They may also focus only on the negative aspect of the conversation.

To understand why the communication process is complicated, it is helpful to understand how a message is developed, sent, received, and processed.

Sender: The communication process begins when someone has an idea or image about something that needs to be conveyed to someone else. The process of turning those thoughts and ideas into a message to be communicated is called encoding.

Encoding: This is the process of putting thoughts into words. It is during this process that meaning is given to the message, which will be the intent of what is to be communicated to the other person.

Influences: The process of encoding is personal in nature to the person who has the ideas and thoughts. It is influenced by personal biases, opinions, beliefs, attitudes, prejudices, and emotions. All of these internal factors shape how the message is developed.

Let’s look at an example. You have been receiving feedback from customers about one of your employees, and now you have decided that it is time to communicate a summary of this feedback to your employee. You begin by thinking about how you will summarize it, what the most important highlights of the feedback are, and how you will address any areas of concern from the feedback received. As you put your thoughts and ideas together, you are planning what you will say to your employee, and you are encoding the message that you want to communicate. In other words, you are giving meaning to the message you intend to communicate.

The communication process continues when the sender decides on a form of communication to transmit or send a message to another person or persons.

Going Deeper on the Forms of Communication

Formal Communication: Formal communication is usually very structured in nature. It may be directly related to job performance, work requirements, customer service issues, or anything else that requires documentation. Consider this: You have an employee who has missed several days of work and has not had time off available to take, and now you need to communicate an action plan for this employee. You need to develop and document what you will communicate formally with this employee.

Informal Communication: This type of communication is less structured and is often less casual in nature. A manager usually does not need to document this form of communication. For example, informal communication may include an asking an employee for a status update on a project they are presently assigned to complete, or any other simple type of question.

Receiver: After the sender communicates or transmits the message, either verbally or in writing, the communication process continues when the receiver hears or reads the message. The process of receiving a transmitted message is called decoding.

Decoding: This is the process of listening to, reading, thinking about, and interpreting what has been received from the sender. The receiver now attempts to gain meaning from the message that has just been received, provided that the message is not discarded.

Influences: Just as the process of encoding is personal in nature to the person who has ideas and thoughts to be conveyed, so to the process of decoding is personal in nature to the receiver. The message received by the receiver is also influenced by personal biases, opinions, beliefs, attitudes, prejudices, and emotions. All of these internal factors shape how the message is interpreted.

The Message Sent Is Not Always the Message Received

This is one of the most important aspects of the communication process.

What you intend to communicate may not be the message sent, it may be sent in the wrong form or poorly delivered, or it may not be interpreted by the receiver in the manner that you had hoped it would be. In fact, the end result of the communication process could be a completely different outcome than what you had expected.

For instance, you have decided to communicate a new policy for reporting time off to your employees. It involves using a new employee portal feature that employees may or may not have yet used. You have to decide what the message will consist of and how you will transmit it.

Once you transmit the message, even with the intent that you have crafted the best possible message and utilized the most effective format possible, can you be certain it was received, understood, and properly implemented?

Message clarity is paramount. In Susan Adams’ piece How to Communicate Effectively at Work from Forbes.com, Karen Friedman, author of Shut Up And Say Something: Business Communication Strategies to Overcome Challenges and Influence Listeners, points out that “Vagueness is all too common in the workplace, she observes, and you easily remedy it by following the newscaster's drill of spelling out who, what, where, when and why.”

The point: You must be certain that your message is clearly delivered and understood.

In the last example, a message needed to be communicated to your employees, and it was related to a change for the process of reporting time off. You made a decision to hold a team meeting and explain the process to your employees. You then decided to follow up your meeting with an email to reinforce the explanation as a means of providing a step-by-step process for employees to follow in the event they forgot what was heard in the meeting.

You could gain feedback based upon whether or not the procedure is followed when an employee needs to request time off; however, you realize that if the wrong procedure is followed it could create frustration and more work for you and the employees. You decide to use another form of feedback, and check in with each employee on a one-on-one basis. This will you to make certain each employee understood the message, provide assistance if needed, and answer any questions or concerns.

For more tips on solving communication problems in the workplace, check out the video and free e-resources at see 5 Keys to Fixing Communication Before You Lose ANOTHER Employee.

About the Author
Matthew Coleman

Matthew Coleman is the marketing manager for MyEmployees. Connect with him on Twitter; @matthewjcoleman.