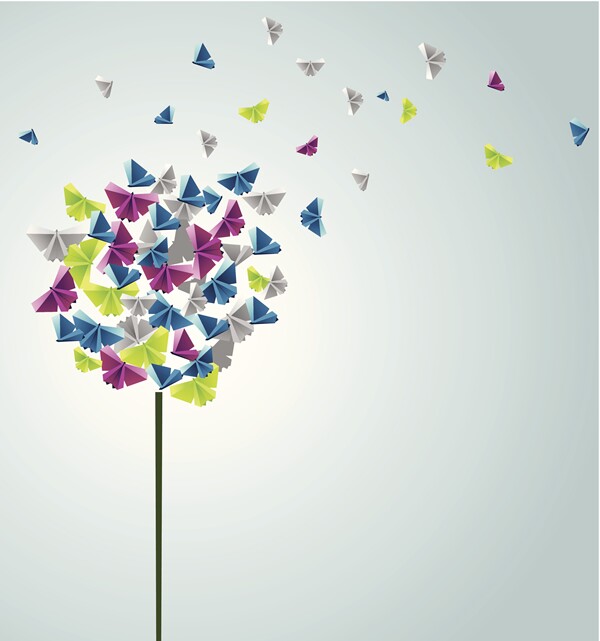 How to Use Animations for Learning

Moving pictures are hard to resist. But research shows when compared to static graphics, animations get mixed reviews as an effective learning medium. Fortunately there are ways to make animations more effective.

Types of Animation for Learning

There are many types of animation that can be used for instructional purposes, including:

Animations attract and capture attention because motion is one of the primary attributes of a graphic that makes viewers take notice. Animations can also increase motivation because of their novelty. When they are humorous, they can create a positive affect. One newer approach is the animated information graphic (see an example from the Articulate community), which can be used for introductory explanations that may seem boring otherwise.

Animations that have a cognitive purpose can facilitate learning because they provide more and different information than static graphics. They have the potential to help a learner build a more accurate mental model of a system’s behavior compared to graphics alone (Schnotz and Rasch, 2005).

There are many functions that animation can fulfill, such as:

The Good, the Bad, and the Contradictory

On the up side, the results of a meta-analysis showed that there were notable benefits to dynamic animations (Hoeffler and Leutner, 2007). In this meta-analysis, the types of animations that had the most substantial effect on learning were:

Problems With Animations and How to Fix Them

Although animations are not ideal for all learning situations, they do have great potential. When animations are not beneficial to learning, it is often due to poor design, presentation to the wrong audience, or a topic that is not suitable for animation (where still graphics would be better). In the problems-solutions table below, you will find very specific problems identified in the research and their solutions. 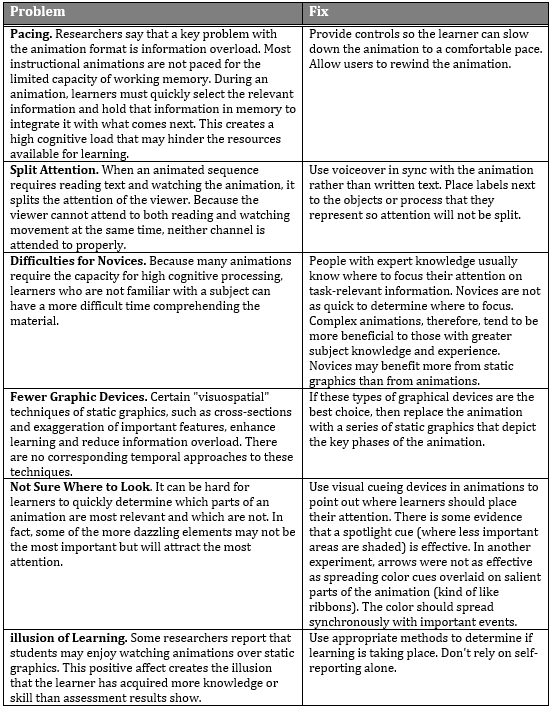 Newer technologies make animations easier to create at a reasonable cost, making the format a viable choice for instruction. With educational researchers piecing together the data on its effectiveness for learning, a set of design principles based on evidence is emerging. It is important to consider the research before choosing to use the animation format. Then animations will be able to meet their potential for learning.

Editor’s Note: Another version of this article first appeared on http://theelearningcoach.com.

Rosen, Y. 2009. "The Effects of an Animation-Based On-Line Learning Environment on Transfer of Knowledge and on Motivation for Science and Technology Learning." Journal of Educational Computing Research 40(4): 451-467.

Schnotz, W., and T. Rasch. 2005. “Enabling, Facilitating, and Inhibiting Effects of Animations in Multimedia Learning: Why Reduction of Cognitive Load Can Have Negative Results on Learning.” Educational Technology Research and Development. 53(3): 47-58.

Want to know more about how to use animation for learning? Join us for the next offering of our Essentials of Adobe Animate for E-Learning Designers online workshop.

About the Author
Connie Malamed

Connie Malamed teaches instructional design skills at the Mastering Instructional Design community. She is a consultant, author and speaker in the fields of online learning and visual communication. Connie is the author of two books—Visual Design Solutions and Visual Language for Designers. She also publishes The eLearning Coach website and podcast. She was honored with the Guild Master award in 2018 for contributions to the learning technologies industry.