How Virtual Reality Is Revolutionizing Healthcare 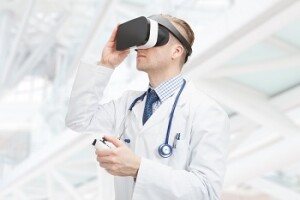 The virtual reality revolution is here. A new generation of VR headsets brings immersion to new levels—the feeling of presence, of actually being in another place. Instead of watching a computer screen that seeks to emulate reality, VR feels like reality. You turn your head and see a nurse standing to your right. You look down and see a patient. You hear the sound of the MRI machine to your left. Room-scale positional tracking allows you to physically walk around and see your hands for realistic interaction and haptic feedback.

Consider a recent front page Wall Street Journal feature that examines VR’s critical role in the future of brain surgery training. “I can figure out how best to approach a tumor and practice it so that when I get into the operation, it’s as if I’ve been there before,” said Dr. Gary Steinberg, Stanford University’s head of neurosurgery.

No doubt, VR technology is “hacking our senses” of sight, hearing, and feeling to create an intense and convincing sense of presence in the virtual reality that is unrivaled by any other medium. All for the cost of just a few hundred dollars for each hardware headset, and software cost is dropping precipitously as well. In fact, medical virtual reality simulators can be created for any task that’s too dangerous, expensive, or inconvenient to practice in real life.

VR offers “embodied cognition,” which means learning with your mind and body, and numerous research studies have confirmed the importance of activating the “muscle memory.” It’s no surprise that every medical student learns and practices with cadavers and in high-fidelity simulation labs with mannequins and actors.

Virtual reality offers these embodied experiences and more. One thing VR does better is to change scale and perspective. Users can travel inside the human body and explore it at molecular level. Fr example, flying through a cell or riding a rollercoaster through the arteries, patients can experience their own anatomy and students can learn complex medical concepts.

The in-body VR experience can be based on CT or MRI scans of an individual patient or a computer-generated environment. The best approach depends on the purpose. Meanwhile, 3D models provide superior interactivity, fidelity, and 3D effect. Stanford Children's Health developed a 3D model of the heart for patient education. Instead of describing the complex 3D dimensional process of the heart in words and flat images, they let parents strap on the Oculus Rift VR headset and step inside the heart. Using hand controllers, parents can grab and rotate the different pieces of the heart and see their children’s defects.

The visceral sense of embodying another person is why virtual reality has been hailed as “The Ultimate Empathy Machine” by film maker Chris Milk. For instance, experiencing your future self in VR reduces stereotypical attitudes towards the elderly and even encourages people to save more for retirement.

Research has validated the “Proteus Effect,” in which the behavior of an individual, within online virtual worlds, is changed by the visual characteristics of their avatar. Stanford research has even demonstrated how the feeling of being a cow increases connection to the animals. In other studies, cutting down trees in VR impacts users connection with nature, making them recycle more paper.

Imagine using a technology powerful enough to make you feel like a cow or a tree, to make caregivers feel like a patient. Leading healthcare providers are already developing “VR patient empathy simulations.” Veterinary clinics are even using VR to show the perspective of a cat, dog, or snake. Staff members learn not to startle a cat after experiencing how a cat sees the world in VR.

Virtual reality is not only disrupting healthcare learning, but also treatment of many conditions. It has already proven more effective than narcotics for pain reduction of burn victims. Patients are distracted during re-bandaging in a “Winter Wonderland” where they are challenged to throw snowballs at snowmen. Virtual reality is also used to treat amblyopia (lazy eye). One study demonstrated a 60 percent success rate for adult and kids, compared to 40 percent success rate of current treatments.

Mental health treatment is another area of intense focus of early VR applications. One study found that fear of public speaking was reduced by almost 20 percent in just four weeks with VR exercises. Another study found that 87.5 percent of participants reduced their fear of heights with VR. It has even reduced PTSD symptoms among military veterans who didn’t respond to traditional forms of exposure therapy.

Whenever a technology comes along that is powerful enough to take you out of your body to reduce pain, rewiring the brain to treat amblyopia, and take veterans to a battle field in Afghanistan to reduce PTSD, the healthcare profession is taking notice.

On the heels of virtual reality is augmented reality, which brings the digital world to the real world. The promise of AR glasses that can give a surgeon x-ray vision is not here yet. But prototypes are already being built on the developer version of the Microsoft HoloLens headset. The AR headsets are expected to hit the mass market in two to four years. Meanwhile, a new generation of inside-out-tracking cameras in iPhones and Android phones and tablets can be used for a number of more mundane healthcare tasks like way-finding and performance support. For example, hold up an iPad to an EKG machine and learn how to trouble shoot it, or watch virtual arrows on the floor to find your way to the imaging department.

From Idea to (Virtual) Reality

How do you get started with virtual reality in your healthcare organization? It starts with demonstrating it to decision makers. VR suffers from the Matrix problem—you have to experience it to believe it. So, get one of the premier PC-powered virtual reality headsets, such as Oculus Rift or HTC Vive, and run demos with stakeholders. You need to buy a VR optimized laptop too. Don’t get a mobile phone-powered virtual reality headset, they will not show the full power of VR. Although there is not a lot of off-the-shelf healthcare content available yet, one good demo to start with is 3D Organon VR Anatomy, which is available for both the HTC Vive and Oculus Rift.

When your decision makers have experienced VR, you need to identify a healthcare problem that can be uniquely solved with VR. Find a team of VR developers to help bring the idea to (virtual) reality. Most VR is developed in the Unity game engine, which is cross-platform. One effective way to leverage the investment is to develop a desktop or mobile version of the same program for minimal extra cost. My firm recently developed a patient empathy simulation for the desktop for broad distribution and a VR version of the same program featured at events.

Bottom line: virtual reality is here. Don’t wait for other organizations to force your hand. Pick a low hanging fruit—a patient education task or staff performance issue that can benefit from a full-body immersive experience—and create an awe-inspiring, transformative VR experience. The time to leave the glowing rectangular screens to step into the virtual reality of the healthcare future is now.

Want to learn more? Join me September 22 for the webcast How Virtual Reality Is Revolutionizing Healthcare.

About the Author
Anders Gronstedt

Anders Gronstedt, PhD, is president of Gronstedt Group, which helps global companies such as GE, United Healthcare, Deloitte, Microsoft, Kimberly-Clark, and Jamba Juice, and government clients such as the city of New York, improve performance with innovative learning approaches. These include next-generation digital simulations, gaming, and immersive 3D virtual worlds. His articles have appeared in the Harvard Business Review and he hosts a weekly speaking series.