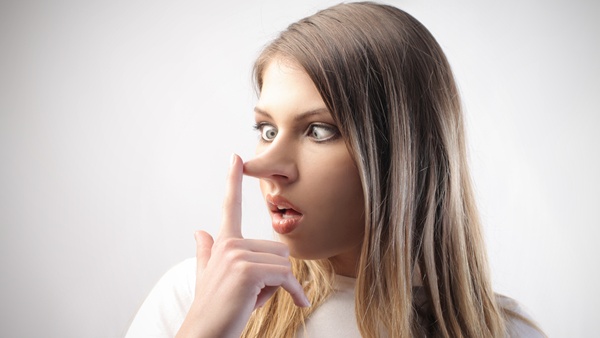 If You Want to Spot a Liar, Listen and Look

Want to know how to spot a liar? Just listen closely—they will tell you. A recent experimental study looks at the language of deception and finds that liars use more words than the truth tellers, swear more, and use more third-person pronouns. (Check out: Evidence for the Pinocchio Effect: Linguistic Differences Between Lies, Deception by Omissions, and Truths, published in the journal Discourse Processes.)

I agree with these findings, but it doesn’t tell the whole story. If you only analyze the spoken words, you miss an array of body language and paralinguist cues that also indicate deception. Here are a dozen nonverbal signals that will help you spot a liar.

1. Pupil dilation. One nonverbal signal that is almost impossible to fake is pupil dilation. The larger pupil size that nearly all people display when telling a lie can be attributed to an increased amount of tension and concentration.

2. Change in blink rate. In general, blink rates increase with stress levels. But a unique pattern has been associated with deception. A study at Portsmouth University shows that a person's blink rate slows down as he decides to lie and stays low through the lie. Then it increases rapidly (sometimes up to eight times normal rate) after the lie.

3. A fake smile. It’s hard for liars to give a genuine smile while seeking to deceive. Real smiles crinkle the corners of the eyes and change the entire face. Faked smiles involve the mouth only and are often asymmetrical.

4. Retracted lips. Lip retraction (lips are compressed and pulled back between the front teeth) is a common reaction when people are drawn or maneuvered into a discussion in which they feel they must hold something back.

5. Duper’s delight. A fleeting smile after an untruthful statement that indicates someone believes they have fooled you.

6. Face touching. A person’s nose may not grow when he tells a lie, but watch closely and you’ll notice that when someone is about to lie or make an outrageous statement, he’ll often unconsciously scratch, rub, or cover his nose. Mouth covering is another common gesture seen when very young children are being untruthful. Adults have learned to eliminate this “give-away” display, but the unconscious urge remains. It is not uncommon to see liars bring a hand to their faces to brush the side of their mouths or to touch or even cover one cheek.

7. Vocal cues. Paralinguistic signals (how you say what you say) that often indicate lying include vocal tone, which usually rises with stress level, as vocal chords constrict, and a noticeable slowing down of speech rate typical of unpracticed liars.

8.  Foot movements. Because feet are the farthest from your brain, they are the hardest area to control. When lying, people will often display nervousness and anxiety through increased foot movement. Quite unconsciously, feet will fidget and shuffle, and ankles may cross and “lock,” pull back under the chair, or wind around the legs of chair. Feet will stretch and curl to relieve tension, rock from side to side in an effort to self-pacify, or point towards the door (signaling a desire to exit).

9. Unusual stillness. Sometimes, in an effort to stop their gestures from "giving them away,” liars (inveterate ones, particularly) will make themselves sit or stand with unnatural stillness. Remember, the first reaction to stress (and lying is stressful for most of us) is not “fight or flight.” It’s “freeze.” This “statue effect” is a very useful cue, and is most revealing when it is in direct opposition to a liar’s more normally relaxed behavior. (I’ve seen people freeze mid-gesture, as they suddenly realize that their body language may be inappropriate.)

10. Decreased illustrators. Because liars are less spontaneous than truth-tellers, they use fewer illustrative hand gestures (pointing, drawing a picture in the air, holding their hands apart to show a measurement) to help tell their stories.

11. Partial shrug. A partial (abridged) shoulder shrug usually indicates that a person lacks confidence and conviction in what she is saying.

12. Longer/shorter response time. If you ask a question that should require some thought, and the reply is a snap answer, the quick response is often a sign of a planned and rehearsed lie. When prepared, deceivers start their answers more quickly than truth-tellers. If your question comes as a surprise, however, liars will often take longer than usual to respond – simply because the process of inhibiting the truth and fabricating a lie to replace it is more complicated than answering the question honestly.

Nonverbal cues are easier to detect when the liar has a greater motivation to deceive or when the liar is tired. Both have to do with added cognitive load. When the stakes are high, added pressure makes the liar pay closer attention to making the story sound plausible and not enough to possible nonverbal giveaways. When someone is exhausted, they have fewer cognitive resources to give to the mentally taxing process of lying.

So, if you want to spot a liar, listen closely. But you’ll have greater success if you listen and watch at the same time.

To read the prior blog posts in this series, please go to 10 Simple and Powerful Body Language Tips or 6 Ways to Deal With the Body Language of Disengagement

About the Author
Carol Goman

Carol Kinsey Goman, Ph.D. is an executive coach, consultant, and international keynote speaker at corporate, government, and association events. She’s the author of 12 books including “THE SILENT LANGUAGE OF LEADERS: How Body Language Can Help – or Hurt – How You Lead” and (her latest) “THE TRUTH ABOUT LIES IN THE WORKPLACE: How to Spot Liars and What to Do About Them.” Carol can reached by email: [email protected], phone: or through her website: www.CKG.com.