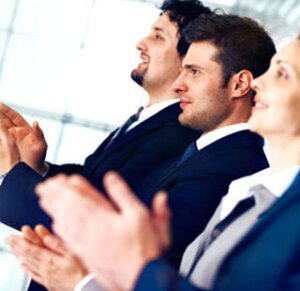 Managers often need to persuade management to accept their idea over someone else’s, or they need to motivate employees to enroll in a program or embrace a new policy. That can require overcoming opposition, winning over those who are neutral, or swaying the skeptics. The ability to influence an audience is essential to success, but it is a challenge for most managers because the science of persuasion is not commonly taught—even in graduate school.

Here are some tips for being a more influential communicator, based on what behavioral psychologists know are reasons why people take action, believe certain ideas, or change their mind.

Be viewed as credible

If you are perceived as credible already, work to maintain it. If you are not, work to strengthen it. As Aristotle said, if a communicator is not credible, the content of the message is of little significance.

Know what it means to analyze your audience

Not all audiences are the same. People might be supportive, resistant, skeptical, or apathetic. How do you motivate those who simply don’t care? Each audience requires a different approach.

Know as much as possible about the opinions, beliefs, and values of the audience. Too many persuasive messages fail because they are delivered from the writer’s perspective. You know what you think is important and what you want to say, but it’s not about you. If the message doesn’t mesh with the audience’s thinking, persuasion will not occur.

Engage the audience with an effective opening

When the audience is supportive, you can reveal your position early. There is no need to ease into it. But when people are resistant, though, it is wise to withhold your position momentarily and start with a statement that they already accept as true. Then move them away from their comfort zone, to a new way of looking at your position.

Solid facts, statistics, examples, clear description, and quotes or insight from credible experts strengthen your argument and provide the supporting evidence you need to make it persuasive.

Use language that connects with listeners

To be persuasive, you need to connect with the audience. Using words that relate to things people can see, hear, and feel makes your message real. Trendy buzzwords (leverage, cutting edge, solutions, bandwidth, synergies), aside from being boring clichés, are vague. Great speeches are memorable because the words resonate with people and move them to action.

Appeal to something the audience wants, needs, or values. If you are trying to persuade an employee to take on a new role, connect it to an image, goal, or status that is important to the person. Perhaps she values responsibility, likes a challenge, or wants to develop the skills she will use in the new role.

People want their behavior to be consistent with their beliefs because in our society, consistency is a highly respected personality trait. Consistent people are thought of as responsible, reliable, mature, and thoughtful. People who are inconsistent are viewed the opposite.

When you talk with an employee about his performance, rather than just have a conversation, ask him to write down his professional development goals for the year. He is more likely to achieve them because he will view the written record as a commitment—and people want to live up to commitments. Doing so is a sign of consistency.

When we are critical of someone in a meeting, we sometimes will feel uncomfortable later. We experience what is called cognitive dissonance (mental conflict, turmoil), because we want to think of ourselves as sensitive and considerate, and our behavior was not consistent with that

Mention that other people are doing it

The principal of social consensus says that when we are uncertain when making a decision, we will look at what others are doing, and we frequently will follow their lead. Examples abound:

So when you are trying to win support for an idea, if you know of other credible people in the department or the company who support it, be sure to mention that.
Ask for less

Let’s say you want a terrific but costly new training program, and you doubt management will approve it. Try asking for a reduced version of the program, perhaps enough funding for a pilot program. Then, come back months later and ask for full funding.

By reducing the size of your initial request, you increase the likelihood you will persuade management to approve it because it requires less of a financial commitment. And if you need to start it as a pilot, you are more likely to persuade management to approve full funding later because they will feel the need to be consistent with their previous action (see the consistency principle above).

About the Author
Ken O’Quinn

Ken O’Quinn, a former AP writer, is a communications workshop leader and a corporate writing coach. He can be reached at [email protected]