Innovation is a Team Sport 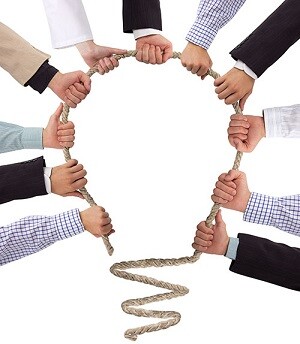 Innovation almost never happens in isolation. In business, especially, innovative ideas are usually the result of multiple brains hard at work. Consider the work of Steven Johnson. His book, The Natural History of Innovation: Where Good Ideas Come From, looked at research by theoretical physicist Geoffrey West who proved that large cities produce exponentially more ideas than small cities. Johnson writes, “[Geoffrey] West and his team discovered … A city that was 10 times larger than its neighbor wasn’t 10 times more innovative; it was 17 times more innovative. A metropolis 50 times bigger than a town was 130 times more innovative.”

Extending that idea to the sales organization, we can conclude that a sales person operating independently won’t innovate as much as a sales team working together. The team can leverage its own talents within the organization or draw in partners, associates, and even customers outside of the organization, creating an ecosystem of ideas.

Clearly, who is on your team is important. Consider shaking things up and creating thinking groups that don’t often work together. Familiarity plays an important part in establishing the right dynamic, but new blood can also invigorate the team’s thinking.

Greg Johnson, vice president of product delivery and consulting at LexisNexis, likens team collaboration to a larger pool of thought. He describes it as a drawing of a target, with circles inside circles. “I draw a dot in the middle and say, ‘This is a rep’s perspective,’” he says.

The LexisNexis VP adds, “And this is not a criticism; this is reality. They only touch a certain number of accounts. And then you start drawing the circles around the accounts their manager has. If a manager has eight reps and he’s going on calls with eight reps, it’s a bigger circle and a bigger perspective. Their world is bigger. If you draw a larger circle around a regional manager, that person might be going all over the southeast. The rep has the smallest perspective, usually, and the more people you can get in a collaboration meeting, whether it’s sales managers or product managers or someone else, you expand that knowledge base exponentially. You broaden it in terms of the perspective and the experiences that they have in an industry or in a market or in a geography. And with those additional perspectives come more ideas and more strategies and additional approaches.”

Putting aside the hierarchy of team members is also critical to moving in a productive direction. Bill Chilton is a principal architect at Pickard Chilton, an award winning architectural design firm. He’s led projects for corporations around the world including the ExxonMobil office complex in Houston, Texas; the Four Seasons Place in Kuala Lumpur, Malaysia; and the U.S. Environmental Protection Agency headquarters near Washington, D.C. His work is always the effort of a large team, consisting not only of the client, but people from many other companies including engineers and building contractors.

“Many of the people on the team that are essential to the collaboration aren’t trained as architects. They don’t need to be. It’s very much a collaboration between disparate voices that are each bringing their own expertise,” says Chilton.

Bottom line: On an effective sales innovation team, roles exist independent of position and hierarchy, and team members may work within or outside of the company. How can your team members work together toward innovation—instead of trying to create in isolation?

About the Author
Mark Donnolo

Mark Donnolo is managing partner of SalesGlobe and author of The Innovative Sale: Unleash Your Creativity for Better Customer Solutions and Extraordinary Results and What Your CEO Needs to Know About Sales Compensation. He focuses on helping companies grow profitably by developing and implementing strategies that improve the effectiveness of their customer-facing sales, marketing, and service organizations. His areas of focus include sales strategy, customer segmentation, channel strategy, sales organization design and deployment, performance management, and incentive compensation. Mark’s work spans several industries, including technology, telecommunications, business services, manufacturing, and financial services.