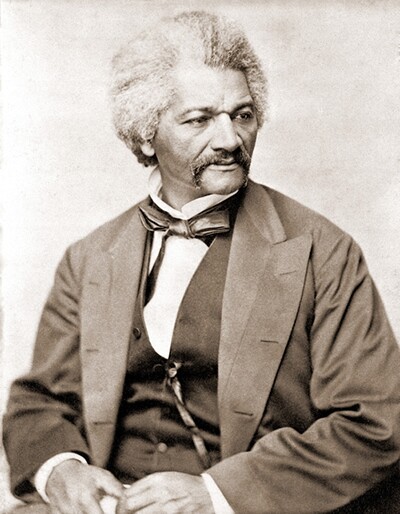 Bestselling author, brilliant orator, and effective champion for abolition, Frederick Douglass is an inspiration to all Americans. Born a slave in 1817, Douglass escaped to freedom in 1838 while continuing to advocate for the freedom of all slaves. He directed the local underground railroad in Rochester, which smuggled escaped slaves into Canada, and was also publisher of The North Star, an abolitionist newspaper. His books, Narrative of the Life of Frederick Douglass (1845) and My Bondage and My Freedom (1855), were bestsellers, and he also wrote Life and Times of Frederick Douglass (1881).

Douglass was the most photographed American of the 19th century and the first African American nominated for vice president of the United States. His leadership example offers lessons with enduring relevance.

At great personal risk, Douglass persisted in the fight against slavery. A dramatic example of his courage was his July 4 speech in 1852, a time when 4 million people were being held as slaves. Leading Rochester citizens had invited Douglass to give a speech as part of their fourth of July festivities. Douglass used the occasion as a platform to deliver a fiery rebuke against slavery. His speech said in part:

"Your high independence only reveals the immeasurable distance between us. The blessings in which you this day rejoice are not enjoyed in common. The rich inheritance of justice, liberty, prosperity, and independence bequeathed by your fathers is shared by you, not by me. The sunlight that brought life and healing to you has brought stripes and death to me. This fourth of July is yours, not mine. You may rejoice, I must mourn."

Lead Others With Vision

With his great communication gifts, Douglass inspired others to see the necessity of ending slavery and was a widely admired leader for his ability to define the need for change, as he said here:

Despite grave risk, Douglass displayed a desire for learning at an early age. He was taught the alphabet by Sophia Auld, the wife of one of his slave owners, and continued his education by asking poor white children in the area to teach him in exchange for bread. He carried the Webster’s spelling book everywhere and practiced writing on fences, brick walls, and other surfaces available to him, lacking access to paper.

His mother, Harriet Bailey, was likely an early influence to him in his quest for knowledge; she was the only African American woman in the area who could read. Douglass only saw her four or five times in his life—she had to travel 12 miles on foot at night to see him. When he was about 12 years old, Douglass bought the Columbian Orator with money he earned polishing boots; this publication inspired him to fight for freedom for himself and others.

He was an education advocate for the advancement of African Americans and mobilized for the end of racial segregation in Rochester's public schools after the Civil War.

Douglass was humble, and despite his prominence and tremendous achievements, he celebrated the efforts of others to make change happen, as illustrated in this quote:

"It must in truth be said though it may not accord well with self-conscious individuality and self-conceit, that no possible native force of character, and no depth or wealth of originality, can lift a man into absolute independence of his fellow-men, and no generation of men can be independent of the preceding generation."